Written by Jeff Dorman, CFA
Mar 30, 2020
What happened this week in the Crypto markets?

Bitcoin Ruins Weekends
The digital assets market remained volatile last week, albeit not terribly interesting.  Correlations are always high between different digital assets, but historically the magnitude of gains/losses are quite differentiated amongst different digital assets, as many non-Bitcoin tokens exhibit high betas to Bitcoin, and thematic investing is often a major driver of price. But these idiosyncratic price moves are now few and far between, as the entire digital assets market is now taking its cue from Bitcoin cryptocurrency, as the Herculean rescue efforts by central banks and governments around the world will forever be written into Bitcoin’s history.
Interestingly, Bitcoin (BTC) may have once again acted as a leading indicator for other risk assets.   Bitcoin rallied off its lows a full week before gold and equities recovered, and before oil stopped catching on fire.  Last week, Bitcoin was unchanged week-over-week, perhaps setting the equity markets up for a much needed quiet week (as of publication, futures markets are indicating a rather benign US equities open on Monday).

Digital Assets Market Ruins Weekends
As if the weeks haven’t been long enough, the digital assets market has also been determined to ruin weekends too.  We’ve seen a similar pattern emerge in each week since the bloodbath began on March 12th. Bitcoin has traded sharply down on weekends, only to recover during the week.  This is a bit of an odd pattern, and may be indicative of a lack of market makers on weekends, which leaves thinner order books and opens the door for more downside volatility.

The Great Stimulus
Umm… the $2 trillion US fiscal stimulus seems like a lot.

The $4-5 trillion US monetary stimulus courtesy of the Federal Reserve is also a lot.
The response abroad…. yes, also a lot.
Something was necessary of course. The global economic machine is interconnected and interdependent, so you can’t just shut it down indefinitely without massive consequences and ripple effects.  But there is no way to judge these efforts right now. We may not be able to fully judge the impact for decades. But we do now that life for the average person is about to get very difficult, as indicated by a record 3.3 million jobless claims last week and expectations of millions more to come this week.  And according to Goldman Sachs, we are probably nowhere close to being completely out of the woods, as the average length of an event-driven bear market is just under 10 months.

That said, markets are unlikely to go straight down over the next 10 months.  There will be many fits and starts, as we’ve seen already this past week. In fact, the Hail Mary from governments around the world may already be working in terms of creating the intended market stablizing effects.  In the credit markets, for example, $100 bn in new issuance came to market last week, and the LQD (investment grade bond ETF) is up ~17% from the lows. This stimulus is just an extraordinary amount of money, and it’s hard to bet against the world when there is this much cash out there just waiting to be deployed into good companies, and good projects, as soon as the waters calm.
While it was necessary, and may even be working, it also seems a bit hypocritical.  Why is every adult told to keep 6 months of salary saved for a rainy day, but the government perpetually spends more than it brings in running massive deficits, and companies can’t survive 30 days without assistance?  Why are executives and shareholders allowed to privatize their gains (buybacks) and socialize their losses (bailouts)? Moreover, if you had to make a list of critical services during a global quarantine, wouldn’t the list be nothing more than producers of food and household staples, energy producers, home delivery, and healthcare workers?  Yet the stimulus is focused more on saving the markets than on saving the actual economy and people.
Conspiracy theories aside (like how in the world BlackRock was picked to direct bond buying programs for the US Government, even though it likely means buying their own funds on behalf of the Fed, or how Trump and Pence held a secret meeting with Hedge Funds right before equities gained 20% in a week), this stimulus is straight up generational theft.  The government is selling our future to bail out companies that may or may not continue to employ their workers. The backlash around bailing out Wall Street at the expense of Main Street will only intensify from here.  Occupy Wall Street is making a comeback, only this time, the solution may be a peaceful protest via owning Bitcoin. 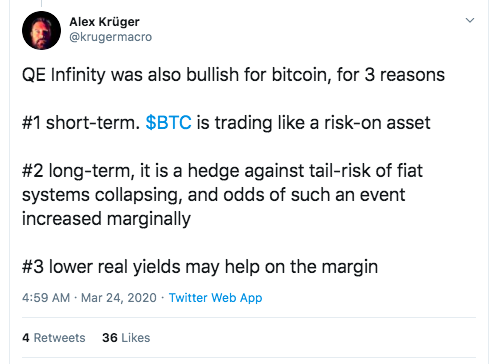 Crypto Transparency
It’s possible these bailouts will not work, but unfortunately we may never really know.  Transparency is not the strongest trait of our government or our largest publicly traded companies.  Most investors would love to know exactly what happened at these large hedge funds that blew up from risk parity trades, and they’d love to know which insurance companies are in the most trouble as business interruptions claims pour in.

While we’ll never get this level of transparency in the traditional world, we are getting it every day in the digital assets world.  There has been a lot of carnage in crypto this month, but there has been an equal amount of resilience too. And unlike the corporate world, we get to see exactly how these near-death experiences were fixed in real-time, courtesy of transparent data on the blockchain, and self-regulation mechanisms.  For example:
These situations above were negative events that led to positive outcomes.   Transparency keeps these projects honest. The US Government and Wall Street could learn from this.
Notable Movers and Shakers
From Sunday to Thursday, Bitcoin posted gains of 20%, with the rest of the digital asset market rallying in kind. However, Bitcoin is a 24/7 market, and following another weekend slide, Bitcoin ended right where it started week-over-week. Volatile moves like these make outperformance difficult for alternative assets, but there was one notable piece of news that caught our attention:

What We’re Reading this Week
China’s Digital Yuan Nearing Completion
According to a report from the Global Times last week, the People’s Bank of China (PBOC) is one step closer to issuing its central bank digital Yuan. Insiders have reported that the PBOC recently completed the basic functionality of the currency and is now drafting rules for circulation. In addition, Alipay, the payments arm of Alibaba, supposedly published five patents this year that deal with the digital Yuan as it looks to assist with circulation and payments. Although the exact launch date of the digital Yuan is unknown, reports indicate that China has accelerated the project in the midst of the COVID-19 situation and the need for cashless transactions.
HSBC Puts $10B of Private Placements on R3’s Corda Blockchain
Last week, HSBC placed $10b worth of private placement records on the Corda blockchain in an effort to digitize these paper-based assets. Although the bank originally planned to on-board $20b in assets, some on-boarding was delayed until additional functionality was added to the platform to meet client demand. “Digital Vault”, the Corda-based platform, can be accessed through HSBC customer’s online accounts with options to review holdings and related documents. Digitizing these assets is the first step, however, long term HSBC plans to tokenize these assets so they may have a secondary market.
Telegram is a Security According to Southern District of New York Court
A court in the Southern District of New York last week granted an injunction against Telegram from issuing its GRAM tokens to the public. Following an emergency action and restraining order from the SEC in October of last year, Telegram was directed to stop the release of its GRAM tokens to the public. The SEC claimed that GRAMs are an unregistered security offering, while Telegram responded that it used the 506b fundraising exemption. However, the court last week struck this argument down as the reselling of GRAMs on the secondary market would disqualify Telegram from the exemption. The development of Telegram’s legal battle will set important precedent for other ICO issuers and projects for years to come.
South Korea's Biggest Bank is Set to Launch Crypto Custody
KB Koomkin, South Korea’s largest bank, is planning to launch a crypto custody service for assets such as Bitcoin and Ethereum. The bank filed for a trademark patent on “KBDAC” - KB Digital Asset Custody, indicating that the launch of the service could be close. The development of the custody service stemmed from a partnership with Atomrigs Lab which worked on creating a custody solution that uses multi-party computation for private key security. The move to provide crypto custody coincides with South Korea’s new AML rules for crypto firms which were voted on earlier this month.
Bitcoin Firms Report Uptick in Demand for Inheritance Services
Last week, Casa and Unchained Capital reported an uptick in the number of requests for proof-of-death and estate planning tools from users. As digital assets like Bitcoin require the user’s private key to move assets, firms have begun to offer infrastructure for assets to be passed on in the case of untimely deaths. The increase in requests is believed to be due to the coronavirus pandemic, motivating users to consider how their digital assets can be passed on to heirs. Although a delicate topic, the increasing availability of estate planning tools for digital assets is a sign of the industry maturing towards a mainstream asset class.