Why It’s Still So Early in Digital Assets

Leverage and Concentration Rear Its Ugly Head… Again
Roughly 12% of global trade passes through the Suez canal, carrying well over $1 trillion worth of goods per year, and this was being blocked by a single stuck ship.  Meanwhile, over $10 billion in block trades of Chinese tech stocks, as well as Viacom and Discovery, were liquidated in the market last week via Goldman Sachs and Morgan Stanley on behalf of a single family office, sparking massive plunges in a number of (until recently) high-flying stocks. And late Sunday night, Nomura revealed that they have a $2 billion hole in its balance sheet thanks to a single US client, which sent the stock down 15% overnight.
Three single, isolated, concentrated events are roiling global capital markets right now.  These events may end up contained, or they may continue to have ripple effects.  Regardless of the outcome, we know that once again, every fund and broker/dealer is currently scrambling to figure out who they have exposure to, rather than what they have exposure to -- just like in 2007 and 2011.  Trillions of dollars of band-aids have been thrown at the economy over the past 12 years, and we still haven’t fixed the root of the problem -- too much undisclosed risk, and too many financial firms not knowing what risk they actually carry. 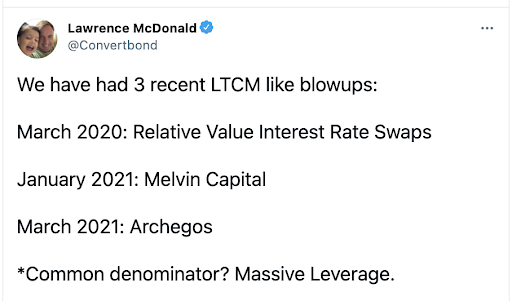 Source: via @convertbondn
A few weeks ago, we went into great detail discussing shadow banking and undisclosed risks in digital assets, and the subsequent problems that can arise when large, single players in the digital assets market run non-transparent hedge fund strategies using aggressive concentrated strategies without proper disclosures (Matt Leising at Bloomberg wrote a nice follow up piece too).  Not surprisingly, last week BlockFi was forced to lower its rates, though the explanation of “dynamic market conditions” fails to address many of the issues we raised.
So here we are watching how the events of last week are going to unfold.  In some ways digital assets are completely isolated due to very few ties between traditional bank/brokerage systems and digital asset workflows.  But in other ways, it’s just a matter of time before the all-too-common pattern of “risk taker makes mistake, margin call triggered, financial middle-man blows up” rears its ugly face in digital assets too.  Digital assets are giving us the technology to allow us to build a completely new financial system, yet in many ways, we’re simply running parallel universes taking many of the same levered risks, with most likely similar future results.
Here’s hoping our continuous calls for more transparency within digital assets ends with a cascade of disclosures rather than cascading liquidations.
NFTs and Web 3.0 Dominate an Otherwise Quiet Market, while DeFi is Ignored
If you were looking for signs that the speculative buying spree of the past five months is coming to an end, there is some evidence to support that the wheels may be slowly coming off. Bloomberg’s Joe Weisenthal pointed out a few high flyers that were in danger of having flown too close to the sun.

Source: Bloomberg
Despite all of this, digital assets barely budged last week (other than a round-trip dip and bounce around a large options expiry Thursday).  In fact, it was a fairly listless week of trading, with the only real outliers coming once again from niche sectors within the market (Web 3.0 and NFTs).  Perhaps more interestingly, both the media coverage and investor knowledge bases of NFTs seem to be outpacing DeFi, even though the market cap of DeFi tokens ($55 billion) greatly surpasses that of NFTs ($6 billion). Moreover, there is roughly $40 billion worth of users of DeFi, compared to only small, niche usage of NFTs.
There may be a good reason for this. DeFi is competitive to Wall Street and the media’s coverage of banks, whereas NFTs are seen as an additional revenue source for both.  It’s much harder for a banker to come to terms with their services no longer being needed (DeFi) than it is to convince them to start selling the next hot thing (NFTs). Moreover, the total addressable market for NFTs may actually be higher than that of DeFi.  Most people, especially  young adults, have an easier time digesting tangible products like NFTs compared to intangible knowledge sets required to secure a loan via DeFi.  As such, collectibles and art have a much lower educational barrier to entry.
While the market has cooled somewhat, the macro forces behind the speculative buying have not gone away.  As long as the US dollar remains near 7-year lows and US interest rates remain near all-time lows, inflows into equities, digital assets and other higher yielding asset classes will likely continue, and that is generally supportive of price long-term.
Source: BofA / Bloomberg / Coinshares
It’s Still SOOOOO Early
Fed Chairman Powell made statements last week regarding his stance on digital assets. Many of us rejoiced when we saw this flawed and not-all-encompassing generalization.  The small sliver of investors who already realize Bitcoin and “cryptocurrency" actually make up a tiny portion of the market relative to the equity- and reward-like features of pass-thru tokens welcomed this confirmation from Powell that we have at least 3-5 years more of uncrowded investing opportunities before the rest of the world begins to realize how truly different most digital assets are from that of cryptocurrencies.

This view was strengthened further when we had the privilege of being a guest speaker at last week’s “Crypto Gathering” event hosted by Real Vision.  Before the panel, Real Vision released the results of their survey regarding which digital assets are best to own.  During the panel, most argued that BTC and ETH, at 56% collectively, were under-represented (in-line with cap-weighted indexes which are essentially 90% BTC and ETH).  Meanwhile, we argued that BTC and ETH are actually massively over-represented in this mock portfolio, due to how high the correlation between ETH and BTC is, and how many sectors, companies, and token types were missing from this portfolio.  The top 25 are owned by the media and retail; the unique value-accruing small- and mid-cap tokens are owned by insiders and asset managers.  It’s yet another reminder that the real value being uncovered in this space has not yet reached the masses.
Inflows continue to pour in, and most cash-flow producing tokens continue to be under-represented in investor portfolios.  Yes, even after a year-long rally, it is still very early.