“That’s Our 2 Satoshis” — Yet Another Request for More Transparency

What Happened This Week in the Digital Assets Markets?
Week-over-Week Price Changes (as of Sunday, 07/25/22) 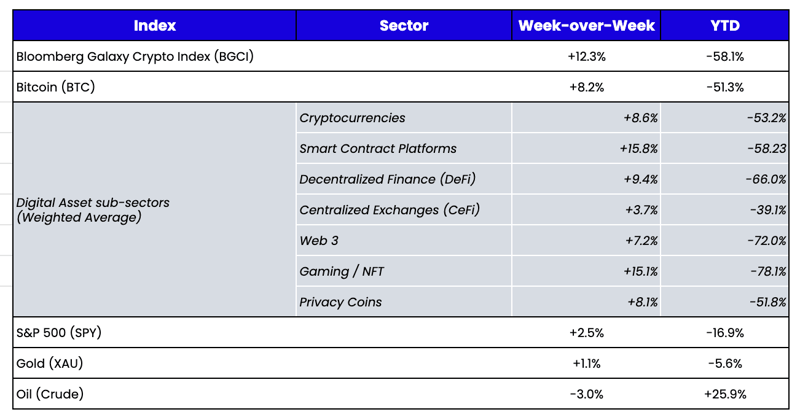 Source: TradingView, CNBC, Bloomberg, Messari
Another “Hated Rally” May Be Upon Us
Risk assets have quietly put together a few positive weeks in a row, rallying off the June lows and the short-lived CPI lows from a few weeks ago. But depending on where you look, you may come to wildly different conclusions.
On the one hand, you could say this is still a macro-driven bear market affecting all risk assets similarly with high correlations and little differentiation. For example, if you are still in the “Bitcoin represents all digital assets” camp, you’d be right—Bitcoin is trading like a high beta growth stock.

Source: Delphi Digital
In fact, everything related to Bitcoin—like the publicly traded Bitcoin mining stocks and crypto exchanges, and the retail-friendly BTC copycat tokens like SHIB and DOGE—are trading exactly like fintech stocks. So, for example, on the chart below, it’s hard to find differences among fintech companies like SQ and SI; crypto stocks like MSTR, COIN, RIOT, and MARA; and retail tokens like SHIB and DOGE. 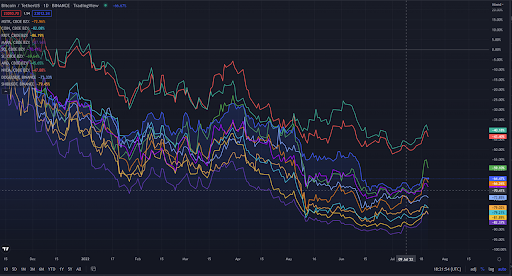 Source: TradingView
On the other hand, if you look beyond BTC and copycat cryptocurrencies, most smart contract protocols, DeFi applications, gaming/NFT companies, and Web 3 protocols have completely decoupled from BTC and tech stocks. Notably, these moves have not been broad-based, but have come on the heels of specific news, events, and tokenomic improvements. Many of the leading gainers over the past 3-4 weeks have announced a significant initiative: DYDX, UNI, MATIC, CRV, MKR, APE, AXS, AAVE, ATOM, LDO, SOL, BNB, FTT, and, of course, ETH via the ETH 2.0 merge timeline updates (not shown is LDO, which is +243% and couldn’t fit on the chart!) 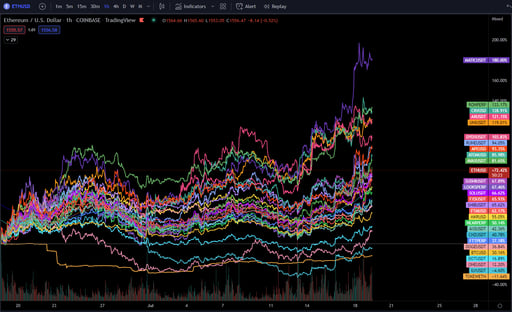 Source: TradingView
These moves are puzzling investors. Many who sat on the sidelines seemed okay with missing the first 10-20% move higher to avoid catching a falling knife, but that was based on the assumption that it would be easy to buy on the way up if the entire market moved higher uniformly. Instead, many leading tokens from their respective sub-sectors have rallied +50-100% off the lows and have positive catalysts happening in real-time or on the horizon. Meanwhile, as we’ve discussed numerous times over the past few months, digital asset “cash” allocations are higher than ever on an absolute dollar basis and relative to the size of the assets available to be purchased with this cash. Equities are in a similar position, with the lowest equity allocations since 2008 and the highest cash levels since 2001.
Those that have been around digital assets long enough to remember other macro-driven selloffs likely recall that digital assets often bottom before equities. They've acted as leading indicators for sell-offs and rallies for over two years. And the bull case for digital assets is quite similar to that of April 2020, which was the beginning of a 10-month "hated rally"  in which short sellers and sidelined investors watched in disbelief, hoping for another selloff to put cash to work. For a fun trip down memory lane, read what we wrote in April 2020, which shows eerily similar parallels to today’s market:
Of course, a big difference is the Fed and other central banks are taking stimulus away from the market versus two years ago when they were flooding the market with money. But, conversely, two years ago, stablecoins, DeFi, and NFTs barely existed, and we now have major use cases for battle-tested digital assets.
Time will tell if this is just a bear-market bounce or if we will again watch in disbelief as prices continue to move higher.
Transparency on Blockchain
Following the insolvencies or near-insolvencies of over a dozen companies and projects, we hope the digital asset industry is finally getting the message about the importance of self-policing and self-enforced transparency. But there are still considerable differences between voluntary transparency and forced transparency.
Arca has advocated for increased transparency since our firm’s inception; we’ve asked for increased transparency from stablecoins, lenders, individual token projects, VCs, and the exchanges that list tokens without adequate disclosures. We've also been willing to publicly speak out when there are obvious examples of a lack of transparency, especially regarding shadow banking.
Today, some companies are forced to reveal information via the bankruptcy process. Unfortunately, this directive is a day late and a Bitcoin short. Companies like Voyageur and Celsius have shown detailed asset/liability mismatches via bankruptcy filings—information that would have been much more helpful to customers before the businesses filed for bankruptcy. 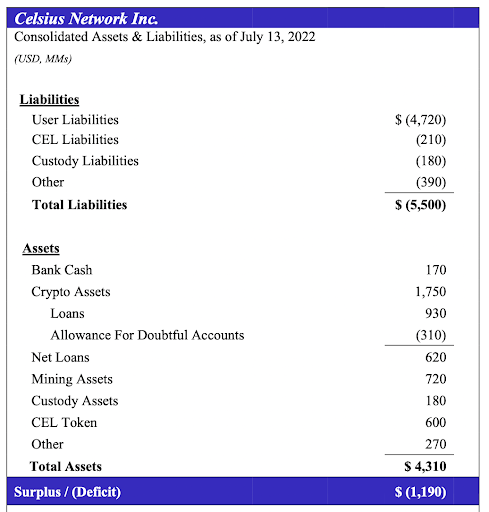 Source: Celsius first-day filings
Compare that to the recent voluntary blog post from BlockFi, which is confusing at best, and fails to address the true asset/liability match and duration liquidity profile of the company. It doesn't do much good if these releases are just for show and don’t provide critical answers for customers who want to make sound decisions based on a company’s health.
Stablecoin issuers are ahead on the transparency front, as both Tether (USDT) and Circle (USDC) are releasing frequent, audited transparency reports about their holdings. Soon, these disclosures will likely be mandatory and standardized via regulation. But for now, the reports are giving customers greater confidence, leading to increasing AUM and transactions. 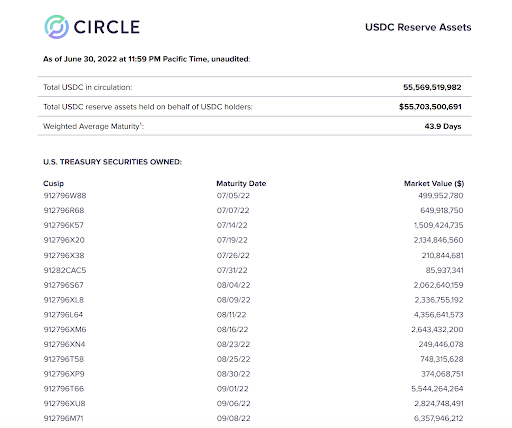 Source: Circle quarterly attestation for USDC holdings
We’re seeing the least amount of progress in transparency from the exchanges themselves. While they have teams of lawyers that decide what they can list, no one seems to advise them on how to list an asset. Much of the decline in token prices following listings stems from fundamental information asymmetry regarding token supply. At a minimum, every token listed on an exchange should have detailed information regarding big investor unlock dates, vesting schedules, and supply schedules. These disclosures are bare minimum-level transparency measures that could help avoid a disaster like the ICP crash, which was destined to go down, but only the informed insiders understood how bad it was. When you see a price chart like this, it is evident that the exchanges were complicit; the information that caused the ICP decline could have been made readily available. 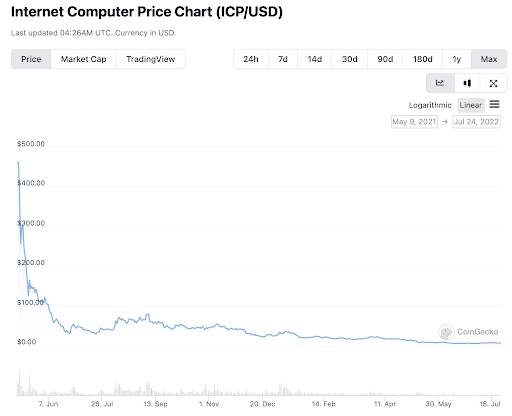 Source: Coingecko
On the flip side, there is one area of digital assets we’re seeing great progress on the transparency front: you guessed it, DeFi. From Dune Analytics and Token Terminal to token issuers' dashboards, blockchain-based financials are readily available in real-time for digital asset investors. It’s like getting an 8-k every day, so it’s nearly impossible to miss when information changes that could adversely affect customers and/or investors. And if you aren’t skilled enough yet to read a block explorer, there is a whole gang of onchain blockchain detectives prowling the beat every day to help uncover shenanigans. For example, a former Coinbase employee was charged with insider trading and wire fraud this past week. Public blockchains’ transparency allowed a citizen to spot the scheme almost immediately when it happened, which helped alert Coinbase and regulators. This type of real-time knowledge is simply not possible in traditional markets. Contrast this with the recent Tesla news: Tesla announced in its earnings that it had sold 75% of its bitcoin holdings worth $936 billion. These sales happened in April and May, but the market did not find out until mid-July. We knew what and when Celsius and Luna were selling in real-time, yet we had to wait 3 months to find out Tesla sold.
While we sympathize with those customers who are now facing real financial and mental distress over the bankruptcies and seizure of funds at Voyageur and Celsius, many of these customers chose to deposit tokens like MKR, AAVE, COMP, UNI, and SUSHI on Voyageur and Celsius without learn how to use the products. Parking assets and trading on MakerDao, Aave, Compound, Uniswap, or Sushiswap could have saved them from financial ruin, and they would have known immediately if there was a problem on any of these platforms.
Unfortunately, the terrible actions by a select few are waking people up to the importance of DeFi and transparency. Still, the positive takeaway is that these actions force investors and customers to learn the differences between opaque investment practices and transparent onchain actions. Do your part by demanding more from those withholding information, and spend time learning about different solutions.
What We’re Reading This Week
Three Arrows Capital Unravels As Creditor List Emerges
Stablecoin Provider Circle Eyes Public Listing in Q4 This Year: CFO - Decrypt
Elon Musk: Tesla Sold Its Bitcoin Because of COVID Lockdowns in China
UK To Regulate Stablecoins as a Form of Payment Via New Bill
Ex-Coinbase Manager Arrested in US Crypto Insider Trading Case