What Happened This Week in the Digital Assets Markets?
Week-over-Week Price Changes (as of Sunday, 10/23/22) 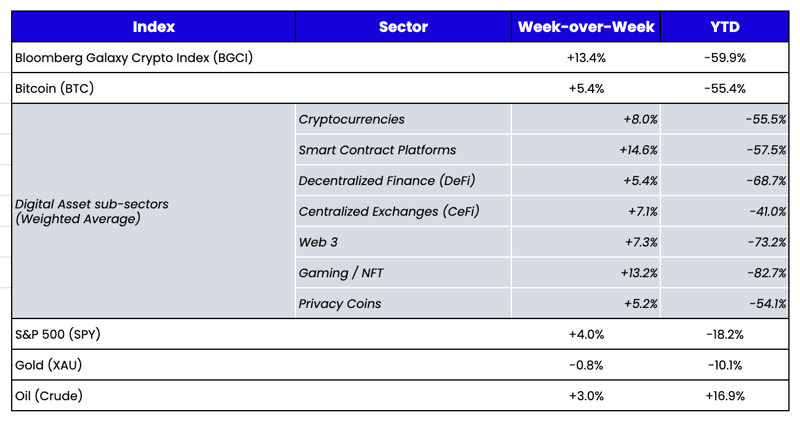 Source: TradingView, CNBC, Bloomberg, Messari
Bad Week for Shorts
A week ago, we wrote about “global central bank coordination,” highlighting both subtle and not-so-subtle interjections by the BoJ, the BoE, and the Federal Reserve, which not-so-coincidentally occurred at the same time a week ago Friday. While equity and fixed-income markets rallied immediately upon the “pivot” narrative, digital assets didn’t follow suit, leading to this actual exchange in Arca’s internal trading chat heading into the weekend:

Friday, October 21st: “Digital assets really lagging here… would not be shocked if we get a +10-20% weekend. Feels like anything with high short interest is going to squeeze hard this weekend. Plus, dealers continue to point out the low levels in both implied and realized vol, and how this consolidation usually precedes a fast move in either direction.”

The only real shock was that it took until Tuesday to play out. Tuesday was one of largest days for short liquidations ever, with more than $700 million worth of shorts liquidated, followed by more violence on Wednesday with another record day of short liquidations and yet another day of painful short squeezes on Friday.

Source: Coinglass
Following the central bank actions and the move in equities and rates, there was a shocking amount of bearish positioning heading into last week. Digital asset investors had been defensively postured, as indicated by the demand for downside hedging via put buying (negative skew), a negative basis for CME futures contracts, and negative funding rates in ETH and other digital assets as open interest grew. Ultimately, this short squeeze led to a +10-20% rally across the board, led by ETH, ATOM, BNB, a handful of DeFi tokens, and the two projects with the most World Cup exposure (CHZ and ALGO).
The question is, why? Why were so many investors still short, in large size, given what seemed like an obvious “pivot?” Well, there are myriad valid reasons for thinking the world is ending—inflation, World War III, higher cost of funding, bankruptcies and credit issues, political instability, falling house prices, etc. But there are also plenty of data points suggesting that nearly all investors are already prepared for the worst outcomes, with record-high cash positions and near-unanimous expectations for declining earnings and GDP. When you get bad outcomes but markets are already pricing in that outcome, you tend to get the opposite price action. And that’s exactly what we’ve been seeing for months in digital assets—negative news is largely shrugged off or met with mild selloffs, while positive news is met with 3-5x the gains. The asymmetry to the upside remains.

Source: Twitter
Stablecoins Are Now a Race for Stable Profits
By Wes Hansen, Director of Trading and Operations at Arca

The #2 stablecoin by market share, USDC, has seen its market cap fluctuate between $40 billion and $48 billion this year, hitting a peak between February and July before losing market share steadily in the last few months. There are a handful of drivers of the fluctuations and recent declines in the total supply of USDC.
The bounce in early May coincided with the collapse of Terra and its stablecoin UST (which, at the time, was the #3 largest stablecoin with roughly $18 billion in assets). This resurgence of USDC through May to a second peak in June and July was driven by a flight to quality, as USDC is often viewed as the “safest” of the dollar-backed stablecoins. After UST collapsed, many investors rushed to short Tether (USDT), perpetuated by recurring concerns that USDT was a house of cards that must also be heading to $0 after UST collapsed (though the two stablecoins are completely unrelated and used different mechanisms for price stability). As a result, USDC market share increased, and USDT decreased. 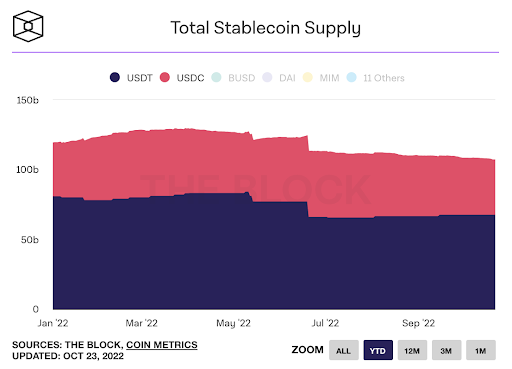 Source: TheBlock
Once the fears of a USDT collapse subsided (though it's still a popular short idea in the TradFi world), investors began returning to the stablecoins they preferred—especially those with the best market depth. On non-U.S. exchanges, USDT is the clear #1 in terms of volumes and market depth. Further, outside of the U.S. and a few other countries, USDC is generally not preferred because of regulatory concerns. Especially in Asian countries, investors are reluctant to hold USDC because of fears about U.S. regulation and what it might mean to their assets with a U.S.-based company like Circle. Investors who are concerned about U.S. regulators tend to prefer USDT over USDC. As a result, over the past few months, USDT has again gained at the expense of USDC.
But other factors have led to the decline in the USDC market cap. Most notably, we’ve seen a shift from exchanges that favor consolidated order books instead of fragmented markets with different trading pairs. While this was at attempt to improve order book depth through less fragmented market pairs, it led to a significant decline in use for USDC. FTX has done this for a long time, but Coinbase has also moved to treat most USD-based stablecoins as fungible with USD on exchange. Most recently, Binance moved in a similar fashion to promote the usage and adoption of its own stablecoin, BUSD. As a result, BUSD has been stealing market share from USDC, growing steadily from about $13B to $21B over the past 12 months. 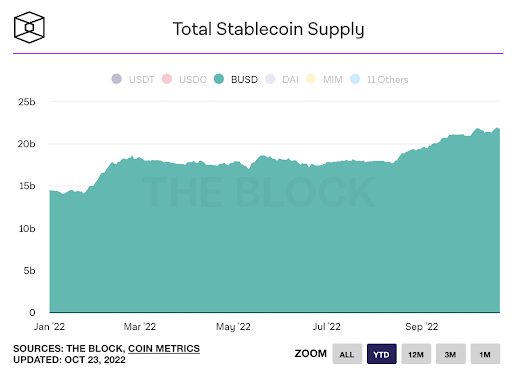 Source: TheBlock
Lastly, this past year has been tough for global markets. Many funds and companies in the digital assets industry have struggled, with multiple going under (or heading that way soon). As investors pull assets out of the digital assets market and companies liquidate assets, redemptions follow. And it would seem that USDC was responsible for a larger share of these redemptions than some of the other stablecoins. Circle has always had one of the best create/redeem platforms, so it's very easy to move assets back and forth to a bank through their system. In good times, they will benefit the most from the ease of conversion; in bad times, they seem hurt by it.
Why is any of this important? Well, if you haven’t noticed, interest rates have risen this year—a lot. And what used to be just a race for market share is now becoming a race for profits. With 4% interest rates in short-duration U.S. government bonds, a $10 billion stablecoin is producing annual investment gains of $400 million—none of which passes through to the owners of the tokens. Collecting interest off the float is big business for stablecoin issuers. Tether has assets of almost $70 billion. That’s a spicy meatball. 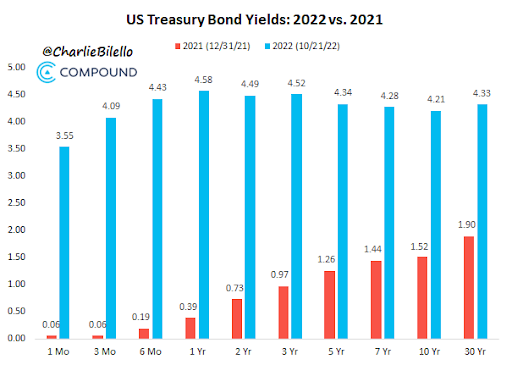