What Happened This Week in the Digital Assets Markets?
Week-over-Week Price Changes (as of Sunday, 11/06/22) 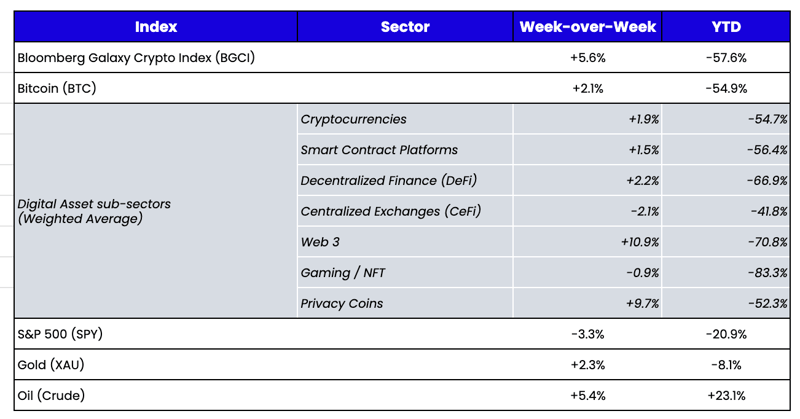 Source: TradingView, CNBC, Bloomberg, Messari
The FOMC, More Decoupling, and FTX/Alameda
We were one of the first, if not THE first, to point out that digital assets decoupled from macro many months ago. Most didn’t want to believe it when tokens were going down as stocks were going up, and only a few recognized it when tokens were no longer falling in unison with equities. But now that tokens are going up while equities are going down, it suddenly seems undeniable.
While the most common way to demonstrate this is via BTC or ETH versus equities, perhaps the best way to show the decoupling is via Uniswap tokens (UNI) and Coinbase equity (COIN). They are two identical businesses with roughly 99% of their revenue driven by retail trading, but one is the publicly traded stock of a centralized company, while the other is a governance token of a decentralized exchange. UNI and COIN had near identical returns from Nov 2021 through July 2022, but since then, UNI has broken out versus COIN, with a bulk of the outperformance coming in the last few weeks alone. 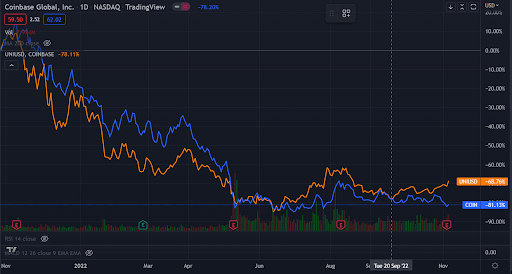 Source: TradingView
The driver of the most recent decoupling was, of course, the FOMC meeting on November 2nd, which confirmed that the central bank is not planning a policy pivot anytime soon and that the terminal rate could be higher than what was previously communicated by the September dot plot. The statement contained some dovish language regarding policy lags and the “cumulative tightening of monetary policy,” but Powell squashed the subsequent rally with a very hawkish speech. While this rope-a-dope induced a 5% peak-to-trough reversal in equities, digital assets largely ignored the hawkish rhetoric, with particular strength seen in MATIC, CHZ, ALGO, AR, and BNB. This may be because the rate of change of rising rates is bad for all assets due to a slowdown in growth, but once the pace of increases subsides, higher terminal rates alone have different effects. Cash-flow-producing equities, especially those with less cash flow today, are much more negatively affected due to lower DCF valuations, whereas a higher terminal rate has little to no effect on many tokens given they are essentially perpetual call options. Similarly, tokens are likely to be more recession-proof than equities and corporate bonds.
But the big story of the week had nothing to do with the Fed or economic data. Instead, two digital asset heavyweights, FTX and Binance, battled it out on Twitter, and chaos ensued. Roughly 80% of my Twitter feed is dominated by people uncovering new blockchain-based data about FTX, Alameda, and Binance wallet movements; often leading to speculative conclusions. But there are a few important takeaways:
Whether this blows over quickly or not remains to be seen. But regardless of how it ends, it’s another blow against the industry (and financial institutions in general) simply for a lack of voluntary transparency, but it’s another giant check mark for the transparency of blockchain data and the skilled researchers trained to uncover, read, and interpret this data. This will be a skill that every financial analyst will need in the very near future.
Chaos, Coordination, and Charizard
How an Obscure Internet Phenomenon Shows The Promise of Blockchains
By Nick Hotz, Research Analyst

As a child of the 1990s and a pretty big nerd, I vividly recall getting swept up in the Twitch Plays Pokémon (TPP) frenzy of 2014. For the uninitiated, TPP was a social experiment in which a community of gamers on the streaming service Twitch attempted to beat the '90s Gameboy classic Pokémon Red by crowdsourcing all of the player's movements to the community (more here). To this day, TPP holds the Guinness World Record for "most participants in a single-player online video game," peaking at over 120,000 simultaneous players.
In Pokémon Red, the player controls Red, a character who roams a 2D world where he collects and battles monsters called Pokémon. (Fun fact: in the Japanese version of the Pokémon TV series, Red’s character is called "Satoshi"). The Gameboy has 7 buttons to press, which make Red perform various actions, and players on the Twitch stream could type in one of the commands (e.g., "Up" or "A") to attempt to influence the game. Unsurprisingly, given that certain parts of the game required heavy coordination among the thousands of users, the experiment was a predictably chaotic mess. Internet trolls gleefully ran amok, impeding progress wherever possible by purposefully failing puzzles, deleting the community's Pokémon from the game, and generally moving backward, while the honest majority attempted to complete the game. At the same time, even honest actors didn't always know the best move at any given time, which led to coordination failure and further setbacks as different players tried to complete the objective they deemed most important at the time. 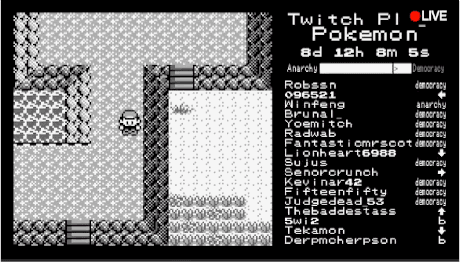 Source: Twitch
In response to a multi-day failure to solve one not-particularly-hard puzzle, the Twitch stream added two new commands: (1) democracy, where players' button commands represented votes aggregated every 30 seconds to determine the outcome and (2)  the original anarchy, where one command would be selected at random and implemented every second. A change to democracy required a 2/3 majority vote, while anarchy could be implemented with a simple majority. Despite the clear advantage of democracy, a good portion of the rest of the game was spent in anarchy. Many were outraged by the change they felt took away from the spirit of the game and worked even harder to impede the community’s progress. 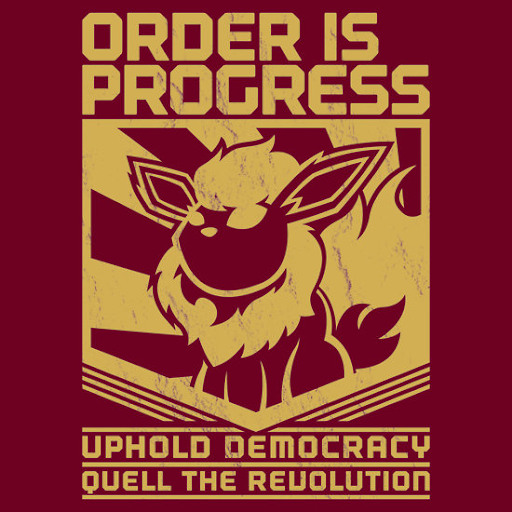 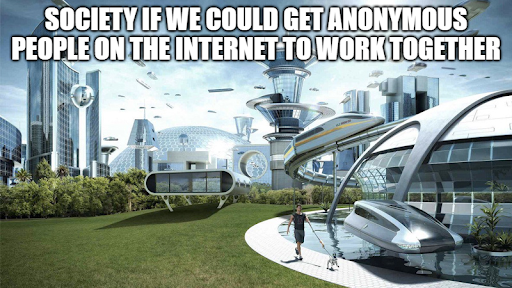