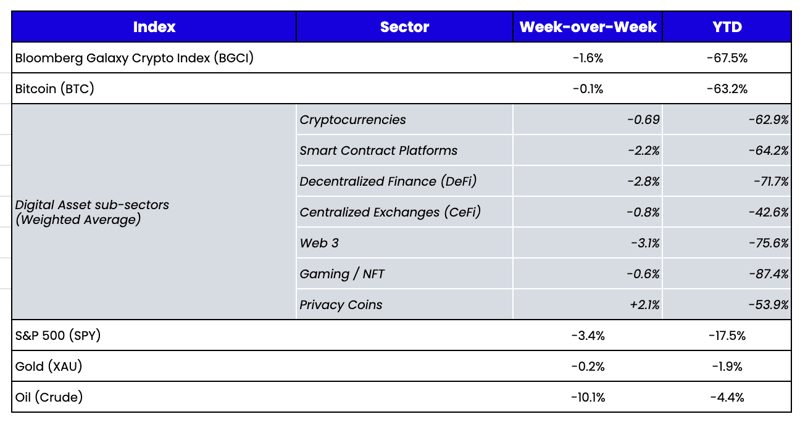 Source: TradingView, CNBC, Bloomberg, Messari
Markets: Calm. Market Participants: Far From It.
Operating a firm or project in the digital asset industry is very challenging. The regulations are confusing, if not outright contradictory. The operational burden is intense to ensure proper security. The surrounding ecosystem and counterparties are all brand new and unproven. The technology itself can be uncertain and risky. The news cycle is 24/7/52. And, of course, the investable universe is evolving and adapting daily as investors and blockchain users try to develop long-lasting and agreed-upon valuation techniques.
It’s hard enough as it is. Yet, some industry participants seem determined to make it even harder. At this point, I’d need 30 fingers to count on one hand the amount of fraud, incompetence, and greed that has affected this industry. The future inmates from May’s crimes are now laughing at the newest criminals about to enter the courtyard. While all eyes have been on the FTX circus featuring ringmaster Sam Bankman-Fried, here comes yet another clown making a mockery of this industry. Congrats to The Block’s former CEO, Michael McCaffrey, for making the Hall of Shame in an ultra-competitive year, with his fraud ironically and accidentally uncovered by his employees. Meanwhile, the United States Senate Committee on Banking, Housing, and Urban Affairs will conduct a hearing entitled “Crypto Crash: Why the FTX Bubble Burst and the Harm to Consumers,” a topic that would make sense in and of itself if not for the witnesses including paid shill, Kevin O’Leary, and a child actor, Ben McKenzie. How could this be the best representation available?
I’m starting to feel like I’m trapped in a Stealers Wheel song:
Clowns to the left of me
Jokers to the right, here I am
Stuck in the blockchain industry with you
It’s not surprising that genuine, hard-working blockchain enthusiasts are also feeling their skin crawl.

Source: Twitter
This is a very public-facing industry that is unforgiving toward anyone who has made a mistake. And we all have. Every investor, service provider, and token issuer in this space has made mistakes. But most have been in an honest quest to build out this industry with good faith efforts according to their stated mandates. As Thomas Edison once said in response to a question about his missteps, “I have not failed 10,000 times—I’ve successfully found 10,000 ways that will not work.” That’s an expected outcome for a new, challenging, innovative technology that is trying to rewire how everything from finance to media to ownership rights work. But Thomas Edison was allowed to fail and retry in peace without grifters constantly trying to undermine his efforts, and his failures didn’t negatively affect millions of people.
APE-ing Into Some Staking Rewards
By Christopher MacPherson, Research Analyst
This upcoming week will be busy, with another all-hands CPI report followed by the final FOMC meeting for the year. While the equity and bond markets continue to exhibit high nominal volatility (despite the VIX hovering near YTD lows), the digital assets market continues to trade sideways. But in an otherwise boring market (in which many continue to focus on failures or who may fail next), the market continues to quietly introduce new events and catalysts within the token investable universe—most of which are flying under the radar.
One of last week’s outperformers was ApeCoin (APE, +9% WoW), the governance and utility token for the Bored Ape Yacht Club ecosystem. ApeCoin swung onto the scene in March 2022 with one of the largest digital asset airdrops ever. The token was launched by airdropping a staggering 150 million tokens (15% of total supply) to holders of Yuga Labs' flagship NFTs: Bored Ape Yacht Club, Mutant Ape Yacht Club, and Bored Ape Kennel Club. This was the first major NFT token launch, and NFT holders were rewarded handsomely. After day one of trading, the airdropped amount per Bored Ape Yacht Club NFT held was valued at over $100,000 USD. Not a bad gift for a community that had already struck it rich. The ApeCoin whitepaper emphasizes that ApeCoin is decentralized; therefore, ApeCoin DAO governance voting controls all major decisions related to the token. The token launch airdrop was the first step in decentralizing the supply of ApeCoin and fueling the community with resources to build out the Bored Ape global brand further.
The benefits of having an ecosystem token governing the entire brand started to pay off immediately. In April 2022, ApeCoin DAO governance proposals AIP-21 and AIP-22 laid out a comprehensive plan for further distributing ApeCoin's supply to supporters via staking. After a long design process by Horizon Labs and a successful bug bounty program period, staking rewards are set to begin today, Monday, December 12th. Holders of Yuga's flagship assets have the opportunity to stake their assets (subject to a cap) and earn APE rewards via four staking pools:
The staking pool participation is updated in real-time and can be viewed via the ApeCoin staking website. 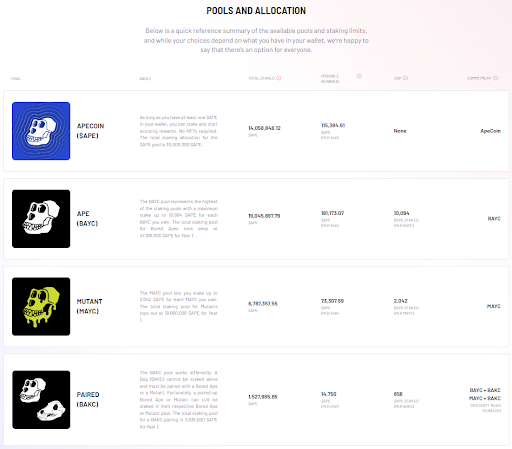 Source: APE Staking Website
Staking emissions are front-loaded, with 175 million APE (17.5% of supply) distributed to stakers over three years. In the first 90 days alone, stakers will receive a distribution of 35 million APE (20% of total). To determine how staking would impact the price of APE and the supporting NFTs, one must model various scenarios, including:
Our analysis indicated a large shortfall in APE holdings compared to the attractiveness of the yield potential. We estimated that at the end of Q3, only ~3.5% of the total supply of APE was held in active wallets that also held a BAYC or MAYC NFT. Most of those wallets held less than the maximum stake allowed per NFT held. Said another way, those who own Yuga Labs NFTs are incentivized to own APE to receive the yield. Since most did not already own it, there required buying pressure on APE. As expected, over the past three weeks, APE has been one of the strongest market performers leading up to the launch of staking. Over the next few weeks, it will be important to monitor the participation in the staking pools (currently only ~11.24%) and the corresponding yield (currently estimated >300%) plus the perpetual futures funding rate (currently -101%), which will change due to market neutral participants looking for arbitrage opportunities.

Source: Arca calculations
Critics of the ApeCoin staking model, such as popular Crypto Twitter influencer Cobie, have made the case that staking events such as these bastardize the true purpose of staking. In this blog post, Cobie argues that while staking began as an innovative way to secure the validity of a proof of stake blockchain, it has since turned into a model that rewards token holders for simply not selling the token. Many other token projects, like SUSHI and AXS, have rolled out similar reward-based staking, which offers a yield for doing nothing other than not selling. This is not exactly the spirit of staking, but it does create incentives to stay engaged while the community looks to increase growth and participation in other ways.
In the coming days and weeks, we expect a large amount of volatility around the price of APE as the market finds equilibrium in staking participation. In the meantime, at least enjoy a market-related analysis that isn’t affected by an SBF interview.