“That’s Our Two Satoshis” — Doctor, Do We Have a Cold? 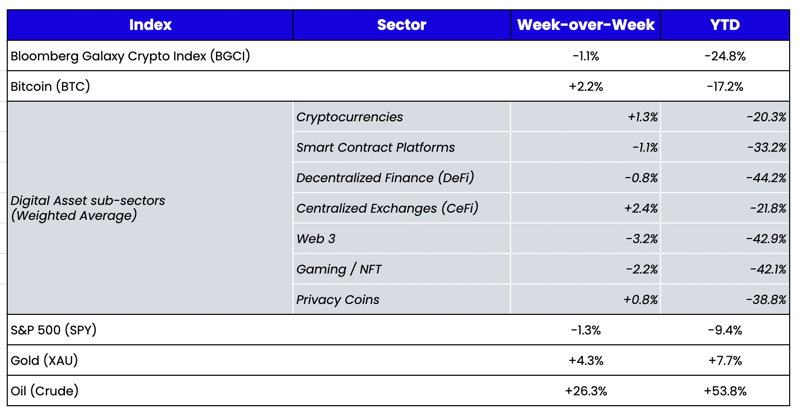 Source: TradingView, CNBC, Bloomberg, Messari
***This week's edition is written by Arca Principals of Venture Investing, David Nage and Michal Benedykcinski***
Consultation
Many of us go for a physical each year; you know the drill—at the doctor’s office, they take your blood, weigh you, and do a few tests. A few days later, you get your results and review them together to see if you need to change your lifestyle or take more drastic steps to correct the course. Investing, especially in venture, is similar. Investors look for a past precedent for deal multiples and growth metrics to devise a framework to evaluate the new opportunity sets they are reviewing. They also examine how the public markets are trending to see if M&A or future IPO/public offerings will support strong future outcomes. This is also the case in digital assets; in venture capital, we review past deals, multiples growth, and the public markets. Let’s take a look at the results to determine if we have a cold:

Source: Pitchbook
2021 was a breakout year for venture capital in digital assets. According to Galaxy Digital and Pitchbook, VC firms invested more money into startups building in the digital assets class than all previous years combined. Of the $33B+ that firms invested, 41% of that capital funded projects offering capital market-focused services, such as trading and lending; 17% financed companies building in the NFT, web3, and gaming sectors.
The table above shows a snapshot of the activity from February to March 2021 and February to March 2022. We observed interesting points in the data: the capital invested in seed-stage deals in 2021 to 2022 more than doubled, from $1.73M to $4.05M, while the pre- and post-money valuations also doubled from $9M in 2021 to $20M in 2022.
If we look at aggregate data on all private deals from 2019 through 2021, we also see this upward momentum:
The corresponding Series A valuations were:
Since 2019, we saw a step-up in valuations averaging 4-5x from Seed to Series A. Based on the last 3 months of fundraising—which saw more billion-dollar funds launching in digital assets than ever before—the probability of a valuation “reset” in private markets in the short term seems relatively low, despite turmoil in the public markets and investors expressing concerns over inflation, Fed tapering/rate hikes, and Russian/Ukrainian unrest.
Examination
Of the 1,592 deals representing $39B in funding from March 6th, 2021 until today, it is worth looking more closely at where that money is allocated: 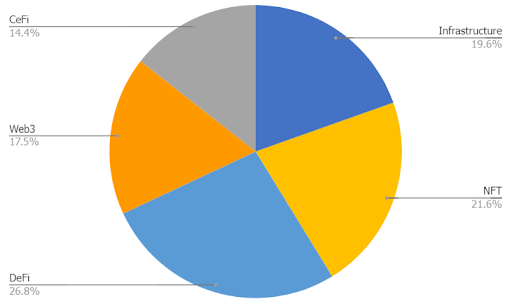 Over 40% of capital flowing into digital assets projects funds infrastructure and NFTs (which account for sub-sectors such as gaming and metaverses). Infrastructure refers to a system or organization’s underlying foundation—the necessary groundwork for mass adoption. The other sector, NFT/gaming, is increasingly looking like the path to mass adoption.
If we look a little further, a few of the largest raises in the last 2+ months have been companies that aim to provide more efficient tooling resources that make it easier for developers to build on blockchain. For example, Aleo—which aims to be the ultimate toolkit for building private applications—raised $200M in their Series B with participation from Samsung Ventures, Softbank, and Tiger Global. Another company, Alchemy, provides a platform layer needed to empower developers to build great applications on top of public blockchains; they also raised $200M in their Series C this past month with participation from Silver Lake, Coatue, and Lightspeed Ventures.
Diagnosis
While running thorough diagnostics, it is also vital to understand the patient's overall environment. For example, when growth stocks started sneezing back in November, it took three months for the market rout to start diffusing into private tech market rounds.

What is different about digital assets that seemingly make early-stage private rounds largely unaffected by public market gyrations? There are several root causes worth examining here before jumping to any conclusions.
The sheer amount of capital pouring in to the space at unprecedented rates could be an obvious culprit behind frothy early-stage valuations. The average vintage size of crypto funds reached roughly $300 million in 2021—double the figure for 2020. Given the latest slew of fundraises, we don’t see this trend abating anytime soon. The profile of investors entering the fray has also been more diverse than ever. For example, 776 Management, the VC firm owned by Reddit co-founder Alexis Ohanian, recently raised $500 million for two new funds primarily focused on crypto and web3. 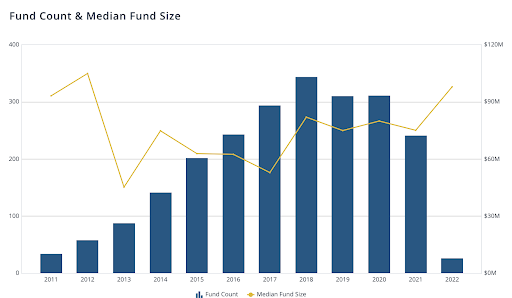 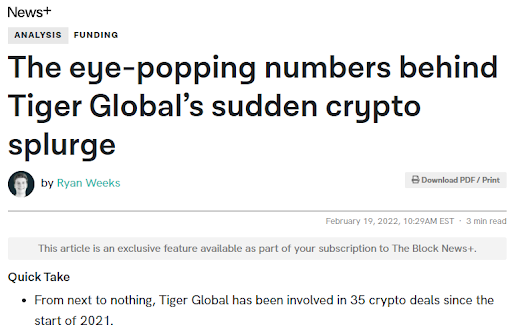 Source: The Block
The type of investment mandates also started to diverge from generalist funds to sector-focused vehicles (gaming alone has attracted close to $2B of allocations in the last 6 months), Layer 1 ecosystem funds, or strategic investors (almost all growth-stage digital assets companies now invest from their balance sheet).
The very nature of crypto venture capital—that it offers potentially lucrative token unlocks—has also drawn in more traditional firms from Sand Hill Road. As an early-stage backer of a digital assets project, companies are no longer limited to participating in an equity raise; they can now invest in the project’s token, which can start to unlock within 12 months of investment. This unique blend of illiquid equity and liquid tokens available to early-stage investors, plus the returns it can generate for LPs, will undoubtedly draw in more established funds like Sequoia to announce their dedicated token funds in the coming months. However, more capital is not always good—early-stage tech investors found out the painful way when SoftBank unleashed its Vision Fund on Silicon Valley.
It is easy to declare the end of reason regarding private round valuations in web3.

A radically different image emerges when we take a step back and look at the evolution of the topline for some of the category-defining upstarts in the web1 or web2 era. Each subsequent generation took less time to reach their first $1B ARR, defying the odds and macro overhang.

Source: CityIndex
Web3 follows this pattern—we see projects like Uniswap cross $1B ARR in a record 14 months since launch. While digital assets private markets are not spared the cyclical pull-backs experienced in the depths of the post-ICO 2018 bear market, this time it’s different™.
Treatment
Most digital asset venture capital firms look to generate alpha by identifying new paradigms, where permissionless networks fundamentally redefine business models and bootstrap user participation via an innovative set of incentives. However, investing in what we believe will be a once-in-a-generation technological shift raises the question: should one even focus on the macro backdrop when most inventions that eventually find product-market fit propagate despite turbulent public markets? While the ballooning private market valuations in web3 have many questioning the irrational exuberance of investors, we see the projects benefiting from the tailwinds of web2 with mobile and wireless ubiquitous and the global consumer fully embracing online spending.
While the amount of absolute capital in digital assets is still small compared to traditional markets, the arrival of homegrown and external mega-funds like Tiger and Coatue could easily continue to prop up the early-stage valuations for quarters to come. It is unlikely that the top builders in the space will be guided to taking valuation haircuts given the asymmetrical nature of web3 investing. Once product-market fit is established, the rate of adoption can be truly extraordinary. We often caution our investors about how reflexivity in digital assets is still largely underappreciated by traditional capital allocators.
As Nick Grossman from USV wrote in 2018, first, apps inspire infrastructure. Then that infrastructure enables new apps. 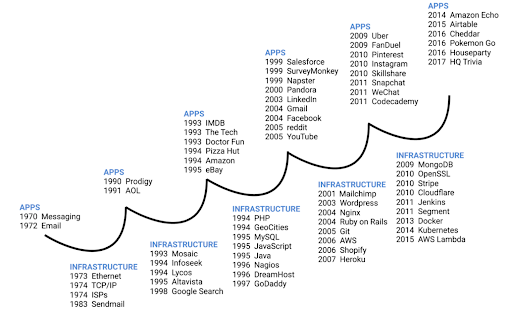