How to Gain Crypto Asset Exposure

Thematic Investing is Back
Those who are not actively trading digital assets are immune to the week-to-week volatility.  That was evident last week, as Bitcoin finished unchanged but oscillated in a 10% top-to-bottom range throughout the week.
Meanwhile, across other digital assets that are not “currencies”, we’ve seen a resurgence of thematic investing. The latest theme is staking.  In a nutshell, staking tokens is a mechanism to reach network consensus while simultaneously earning a yield (here’s a quick primer on Proof-of-Stake vs Proof-of-Work).  While staking is not new, several exchanges (most notably Binance and Coinbase) have recently made it much easier for digital asset owners to stake their tokens and earn rewards.  As a result, those PoS assets that can be staked on exchanges,  like Tezos (XTZ) and Algorand (ALGO), rose as much as 30% last week, while others that will likely be next, like Cosmos (ATOM), Decred (DCR) and Flexacoin (FXC) rose 5-10%.  Thematic investing in digital assets is another step in the right direction towards a maturation of crypto investing. While some themes were a flash in the pan (like IEOs), others have more long-lasting effects (like companies that operate Exchanges who issued tokens that provide quasi-equity and platform utility).  We’ll expand on this idea further in a 2019 recap / 2020 prediction piece later this month.

What about Bitcoin Crypto? Look at What People Are Doing; Not Saying

Bitcoin is stagnating, and that’s fine for those already immersed and invested across digital assets.  There are a lot of other investable opportunities besides Bitcoin.
But Bitcoin is still the biggest and most important digital asset, as it will serve as the educational and physical onramp for just about everyone new to this space.  So when price is stagnating or declining, naysayers may rejoice. However, it would be wise to look at what others are doing, not what they are saying.
For starters, Charles Schwab released a report detailing how investors by age demographic are investing, and Bitcoin is now the 5th largest holding of millennials.

Altogether, adoption is growing even as price stagnates.   And unlike other asset classes where transparency is difficult at best, the growth of Bitcoin is right in front of us. 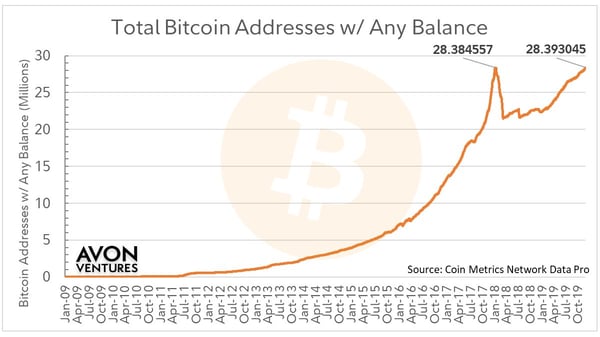 This could be helpful for stock investors, companies, the IRS, etc. Despite these important caveats, an analysis of an estimated cost basis for each native unit of a crypto asset allows for rich analysis of investor behavior in a way that is not possible for other financial assets. For example, data regarding the cost basis for each individual share of a company’s stock is not available. Cost basis data can be valuable because it provides insight into the degree of euphoria or pain that investors are experiencing (due to having either unrealized gains or unrealized losses), two fundamental emotions that affect investment decision-making during asset bubble formations and crashes.

Simply put, growth is being measured in many ways besides price.

There is quite simply a tremendous amount happening in digital assets.  To start, product launches are coming fast and furiously. A few months ago, only one product was available for investors to buy Bitcoin (the Grayscale Bitcoin Investment Trust or GBTC, mentioned above).  But in the past month, this list has expanded considerably:
Additionally, there are plenty of other ways to gain exposure to digital assets now outside of purchasing Bitcoin or these Bitcoin-related products.  Hut8, a Canadian-based publicly traded mining firm, released its financials giving us insights into the logistics of mining.  Canaan Creative went public just a few weeks ago, which means more transparency from miners is on the way. And Silvergate Bank, one of the most crypto-friendly banks in the U.S, IPO’d this year and the stock has risen 20%.
Away from investing, usage and adoption is growing too.  Japanese company SoftBank released a debit card that features a built in digital assets wallet. HSBC announced that they're moving private placement records on to the blockchain (~$20B assets), and Juventus (fútbol/soccer) created a token for incentivizing and growing fan interactions (see “What We’re Reading” Section below).
And lastly, the global macro backdrop continues to favor non-fiat related assets. Governments around the world are talking about digital assets, and in certain places, are providing more regulatory clarity.  The China narrative for exchanges is crystallizing a bit, with an understanding that Huobi/OkEx have the green light to operate while other exchanges may be at risk of no longer being allowed to operate. The US Federal Reserve noted that they are considering letting inflation run above targets, which is seen as a pretty significant policy shift and should create demand for Bitcoin and gold. Deutsche Bank released a report that had a nifty section regarding a hypothetical end of fiat money and potential rise of digital assets.
Between Brexit, US Elections and worsening conditions across the globe (sans stock market), even those not attached to finance are speaking out more frequently.  Anecdotally, we overhear people talking about “risks” at the grocery store, gas stations, and in our neighborhoods. While digital assets may not be a well-known or widely accepted solution yet, what is known is that people are worried and change is inevitable. The events of the next few years will likely be taught in academic curriculum for years to come.
In short, it’s very hard to ignore what is happening in digital assets.  It's worth reading the entire thread from Raoul Pal. 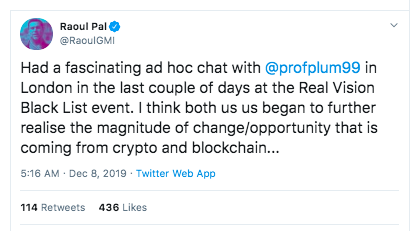 What We’re Reading this Week
European Union’s Stance on Stablecoins
The European Commission and the Council of the European Union last week released a joint statement addressing the use of stabecoins within the EU. Although stablecoins can provide an inexpensive and fast payments solution, they require far more research and understanding as they relate to monetary policy. The statement by the two groups has no legal bearing, but it paves the path forward for the EU’s understanding of stablecoins and how they can fit into the current economy.  Bottom-line: these technologies are global technologies and therefore need a global response.
Square's Next Frontier: Africa
Payments company Square has been one of the leading non-crypto businesses to push for Bitcoin adoption. It’s app allows users to buy and sell Bitcoin and its CEO and Founder, Jack Dorsey, has been a vocal proponent of digital assets. But Dorsey is turning his attention to other markets outside the developed world for Bitcoin’s next evolution. Africa, a continent of 1.2 billion people, stands to benefit far more from digital asset adoption. As a place where traditional financial infrastructure is not as deeply entrenched, digital assets stand to make a much greater impact in a shorter period of time. Dorsey plans to spend the first half of 2020 touring the continent and understanding the current ecosystem and how Bitcoin and Square can make inroads there.
HSBC Plans to Tokenize PPM Records
Last week, HSBC announced it plans to switch its paper records for blockchain-based records for all private placement memorandums. The switch, planned for March 2020, will include $20b worth of assets currently represented by paper documents which also lack standardization. The bank will be utilizing a system called Digital Vault and expects the new system will reduce costs and the time it takes for customers to track down records. Although HSBC states that the system is intended for record-keeping, we view this as a first step to facilitating trading of illiquid assets.
Introducing the British Virgin Islands Dollar
According to reports last week, the British Virgin Islands (BVI) is planning to release its own national currency, similar to the Marshall Islands. BVI today is a crypto-friendly jurisdiction and as a result is home to businesses Tether and Bitfinex. It currently uses the US Dollar but plans to issue a digital token that is pegged to the USD 1:1. The island’s government is partnered with Lifelabs.io to facilitate the rollout of the currency. BVI, like the Marshall Islands, has a small population (35,000 residents) and therefore makes it an optimal testing ground for a national digital currency.
Juventus Soccer Club Introduces a Token
Cristiano Ronaldo’s soccer club, Juventus, just issued a token ($JUV) to allow its 400m fans voting power within the club. The $JUV token can be purchased through Socio.com, a sports-focused blockchain app, and can be used to  vote on certain club decisions. Currently up for a vote is which song should be played when Juventus scores a goal in their home stadium. Socios plans to tokenize more soccer clubs worldwide and has deals with Paris Saint-Germain (PSG), Atlético de Madrid, West Ham United, Galatasaray, A.S. Roma, and esports provider OG.

Crypto Rally - The Good and the Bad

Don’t Bet Against Sports or Technology in the Crypto Market

What We Got Right & Wrong with Digital Assets in 2019

Copyright © 2019 Arca Holdings. All Rights Reserved.
©2018 by Arca Funds Past performance is not indicative of future results. Investors should carefully consider the investment objectives, risks, charges and expenses of Arca "(The "Funds"). This ad other important information about the Funds are in the respective Fund's offering documents which can be obtained by entering Arca Private Investor Portal. All of the offering documents should be read carefully before investing. Disclaimer: This commentary is provided as general information only and is in no way intended as investment advice, investment research, a research report or a recommendation. Any decision to invest or take any other action with respect to the securities discussed in this commentary may involve risks not discussed herein and such decisions should not be based solely on the information contained in this document.