Written by Jeff Dorman, CFA
Oct 14, 2019
What happened this week in the Crypto markets?
Crypto Regulation Smackdown
What a week for news and the crypto regulation smackdown!  General Electric announced that they will be freezing pension plans for ~20,000 employees in a bid to lower their deficit (symbolic of future actions elsewhere), Trump continues to fan tariff and war flames (though the market seems to be desensitized for the time being), and the Federal Reserve stated that they will be increasing its balance sheet by buying government backed securities (just don’t call it QE4).
Meanwhile, if you’ve been patiently waiting for regulatory clarity in crypto, last week finally provided some answers.  The market was chock full of events that shook the digital asset space. While many of these news releases are significant and could easily be viewed negatively, surprisingly, they had very little market impact.  Digital asset prices broadly rose 5-10% week-over-week, as the Fed’s constant interventions may ultimately have offset any negative crypto-specific news. Regardless, it was a much better week to be a lawyer than an investor (and a good time to remind everyone that Arca co-founder Phil Liu is one of the most experienced securities lawyers in crypto).
First, the news, which has been well documented:
There is a lot to unpack here, and we can’t possibly do it justice in a weekly recap, but here are some initial reactions: 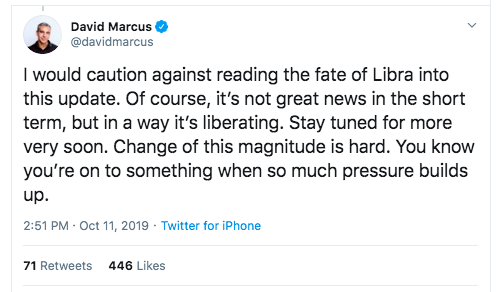 Politics, Censorship and Bitcoin’s Genius
Back to Libra, consider us a little shaken when we read the letters sent to certain members of the Libra Association from US Senators.  Not a week goes by without talking about censorship and threats in places like Venezuela and China/Hong Kong, yet right here in our own backyard, US Senators are now openly threatening US corporations… and it worked.  Essentially, these companies were told to disengage “or else”.

“If you take this on, you can expect a high level of scrutiny from regulators not only on Libra-related activities, but on all payment activities. 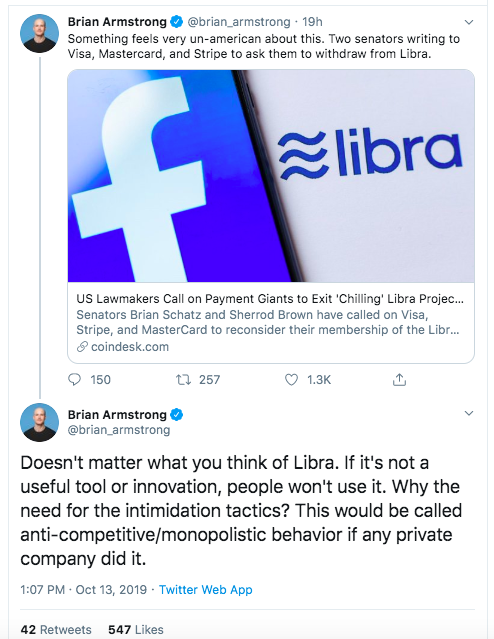 We understand the pushback.  Most financial veterans like ourselves anticipated significant pushback to Facebook/Libra’s grand vision of combining social media with its own in-house currency.  Financial regulations are in place for a reason, and the tech model of “ask for forgiveness, not permission” had no chance of working in Washington. That said, it’s a bit disheartening when companies and entrepreneurs are essentially told NOT to experiment and innovate in order to avoid regulatory pressure.  Perhaps a more logical and measured response from the government would have been to let it get off the ground first, see if there is even interest/demand, and then put them through regulatory hell for years to get it right. Killing it before it even gets started with false accusations and threats seems a bit hasty and defensive.
As much as we may want to ignore it, politics and censorship are now a huge factor in global investing.  No one expected the Hong Kong protests to end up becoming a front-page story about the NBA, sparked by the comments of a single Houston Rockets executive.  And yet, the aftermath of the response from China quickly reverberated through hundreds of other US companies who are desperately trying to maintain revenue (and stock prices) tied to China.
Which brings us back to crypto.  While the digital assets ecosystem has grown far beyond just Bitcoin, it’s important to remember that the genius behind Satoshi’s original vision for Bitcoin is that there is no single person or entity behind it. While decentralization is incredibly difficult to pull off, its importance cannot be understated when achieved.  Governments and companies across the globe are looking for ways to behead the leader of anything that challenges their success -- but truly decentralized projects have no leader.
While none of the above is by itself bullish for Bitcoin or other digital assets -- it does make you realize how little anyone can stop Bitcoin or other projects once it succeeds on its own.
Notable Movers and Shakers
Bitcoin’s overall market share relative to the rest of crypto (called “Bitcoin Dominance”) continued to wane last week (68.8%), marking the 5th consecutive down week for the pacemaker of the digital assets market. The last time the market had five consecutive declining weeks in Bitcoin dominance was February-March of 2019, and the last time the market had 6+ declining market dominance weeks was from December ‘15 - March ‘16  (8). While correlation does not equate to causation, each instance led to a significant rally in the overall market (May ‘16, April ‘19) - symbolizing a potential capital flow from Bitcoin (+5%) to alternative digital assets. As always, there is and will continue to be projects that outperform due to unique value propositions, and last week was no different:

What We’re Reading this Week
No more hope for a Bitcoin ETF in 2019
The Bitwise Bitcoin ETF was rejected last week by the SEC in a 100+ page rejection letter. The agency outlined its concerns, mostly around manipulation of Bitcoin, noting “among other things, the Sponsor has asserted that 95% of the bitcoin spot market consists of fake and non-economic activity, but has not established that it has, in fact, identified the “real” bitcoin market, or that the “real” bitcoin market is isolated from the fraudulent and manipulative activity”. The decision came a day after Bitwise publicly went on CNBC stating “we’re closer than ever”.
The Morningstar Bridge
Research and ratings company, Morningstar, is beginning to rate structured finance debt instruments issued on blockchain. These include projects that securitize short-term small business loans on Ethereum, a home equity securities startup that uses a custom blockchain, and another that helps companies raise capital selling blockchain securities. This marks an important milestone, as Morningstar is effectively bridging the blockchain and crypto ecosystem to the global debt securities industry.
The Client Profile is Changing According to Fidelity
Christine Sandler, head of sales and marketing at Fidelity Digital Assets, said the client profile is changing in crypto, shifting away from early adopters to “growth in global macro” and “longer duration players’’. These institutional investors require more robust tools and Fidelity is looking to offer that, reaffirming that they are not a broker, but an on-ramp for institutions looking to get involved in crypto. To that end, Fidelity, which already offers custody and execution services, will look to add other features such as live streaming prices, best bid and offer further transparency to the opaque OTC markets.
IRS Issues New Rules on Cryptocurrency For First Time in 5 Years
The IRS last week issued long-awaited rules on cryptocurrency taxation. The rules include guidance on how to handle forks and airdrops, calculating tokens earned through mining or the sale of goods and services. There is some concern that the new rules around forks and airdrops might cause more problems as the rules seem confusing regarding the nature of forks and airdrops. The IRS also released its new 1040 form which includes a question asking taxpayers if they own cryptocurrencies.
A FAT Bond Deal?
FAT Brands, the parent company of Fatburger, Buffalo’s Cafe and many others, is tokenizing a bond offering on Ethereum with the help of security issuance platform Cadence. The FAT Brands bonds will be a private credit issuance that will start as paper-based before Cadence tokenizes the paper securities. The tokenization of the $30m bond will allow investors to have better access to data about the deal with expectations that it should be issued by the end of the year.
And That’s Our Two Satoshis!
Thanks for reading everyone!
Questions or comments, just let us know.
The Arca Portfolio Management Team
Jeff Dorman, CFA - Chief Investment Officer
Katie Talati - Head of Research
Hassan Bassiri, CFA - PM / Analyst
Sasha Fleyshman -  Trader
Wes Hansen -  Head of Trading & Operations
To learn more or talk to us about investing in digital assets and cryptocurrency
call us now at (424) 289-8068.

Crypto Rally - The Good and the Bad

Copyright © 2019 Arca Holdings. All Rights Reserved.
©2018 by Arca Funds Past performance is not indicative of future results. Investors should carefully consider the investment objectives, risks, charges and expenses of Arca "(The "Funds"). This ad other important information about the Funds are in the respective Fund's offering documents which can be obtained by entering Arca Private Investor Portal. All of the offering documents should be read carefully before investing. Disclaimer: This commentary is provided as general information only and is in no way intended as investment advice, investment research, a research report or a recommendation. Any decision to invest or take any other action with respect to the securities discussed in this commentary may involve risks not discussed herein and such decisions should not be based solely on the information contained in this document.