Making Sense of the Shifting Narratives in the Crypto Market

Written by Jeff Dorman, CFA
Oct 7, 2019
What happened this week in the Crypto markets?
Long-Term Narratives Squashed by Short-Term Price moves
The crypto markets added to losses last week, falling another 5% just one week removed from dropping almost 20% the week prior.  Bitcoin crypto market has now dropped 45% from highs made this summer, though BTC still remains one of the top performing assets YTD (+109%).  Of course, these large moves are not new; Bitcoin and other digital assets have had plenty of large drawdowns since inception. But the inability for digital assets to retain gains often makes it difficult for new investors to enter the space. 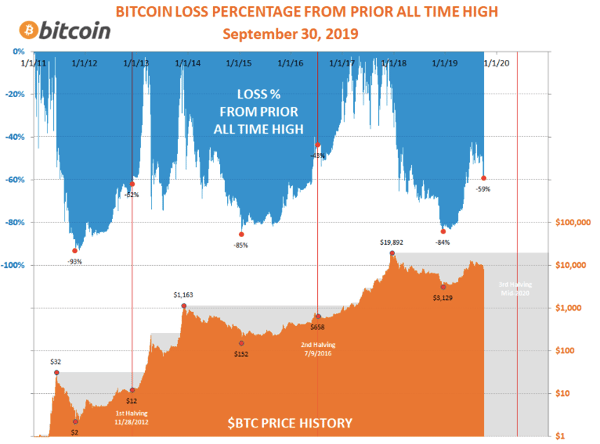 Source: Bitcoin Charts
In order to write about crypto markets each week, we reflect on a lot of contributing factors, and then to connect the dots to create a narrative.  Those who read Arca’s write-ups each week may recognize that these narratives shift frequently, as digital assets don’t quite have a true and consistent identity yet.  Sometimes Bitcoin is a store-of-value, sometimes crypto is an uncorrelated asset class. Sometimes Bitcoin is a risk on/off asset, other times it's a macro hedge. At times Bitcoin is a flight to safety, yet other times it’s simply a vehicle for “trading the lines” (technical analysis).  The digital assets space is still quite small with relatively low volumes compared to other asset classes. In the absence of strong, consistent conviction by all participants, small groups of investors can dictate any single identity for short periods of time. One day a group of investors who believe it to be a SOV can dominate the market, and the next day a different group can decide on a macro hedge theme.  Lacking true direction results in a volatile trading environment, with frequent large swings. This is the environment we’ll be in until a consistent and heavily agreed upon narrative evolves.
These past few weeks, China dominated the flows and the narrative. Our channel checks suggest a group of Chinese miners bought Bitcoin puts in significant size ahead of the tumble in price, which our counterparties insinuate was a coordinated group measure to protect themselves as they sold on the market.  Miners often dictate price movement in Bitcoin, as they are the largest sell side pressure on the market. When they coordinate a sell and protect themselves with options, the rest of the market is at their mercy, until the narrative shifts again. As the space evolves (and as block halvings lessen the market impact by miners), this should change for the better.
Hong Kong Intensifies
Just as Hong Kong tensions started to dissipate (or at least strayed from our primary stream of consciousness in the Western World), it has reignited to new levels. Speaking to various sources this week, two things have become evident:
Those with shops in HK and boots on the ground have relayed to us that money is exiting Hong Kong at a significant clip, with legitimate worries that China will reoccupy Hong Kong sooner rather than later. 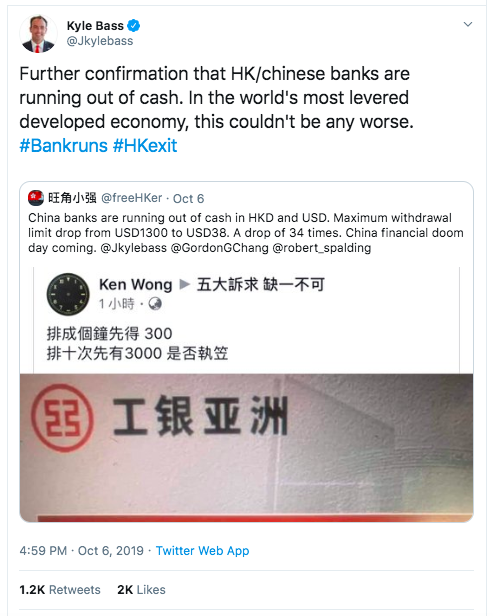 Speaking with a HK-based crypto trading desk in person, we were told that stablecoins, not Bitcoin, are the primary beneficiary of this climate.  Stablecoin volume (namely Tether) has significantly ramped up in Asia in the last few days, as confidence in HKD freefalls. Although this is not the ideal situation for Bitcoin and the safe haven asset narrative, it does bode well for the growth and use cases of digital assets as a whole. This influx of money will eventually be recycled back into other areas of the digital asset ecosystem. Further, spikes in local Bitcoin p2p trading in Hong Kong demonstrate that this climate is at worst neutral, and at best a positive, for Bitcoin itself.
At times like this, we are most certainly not rooting for further destruction of wealth and freedom in order to grow digital asset adoption, but we are thankful that non-sovereign controlled digital assets exist to give people choice and hope.
Large Spike in Local Bitcoin Trading in Hong Kong Last Week Shows the Severity of the “Cash Outlay”

Source: Coin Dance
The “Cumberland Summit”
We recently had the pleasure of attending a private crypto summit in Montreal, hosted by Cumberland (a division of Chicago trading giant, DRW).  From advocacy groups, to market makers, to crypto-native companies, to funds and investors… this event offered opinions from every angle. Topics of discussion included Bitcoin vs Ethereum, Centralization vs Decentralization, the necessity (or not) of Central Banks, and the future of digital assets.
We’ll expand on many of these topics over time, but perhaps the most important takeaway was DRW themselves. DRW is one of those financial powerhouses that everyone has heard of, but few really understand their impact. We often talk about the growth of digital asset infrastructure, as powerhouses like NYSE/ICE, Fidelity, eToro, TD Ameritrade, Square and Facebook have all entered this space in a big way.  But there is perhaps no greater endorsement for crypto than DRW - a firm with a history of making money at every turn has assembled a world class team to invest, trade, and connect people in this nascent industry.
Notable Movers and Shakers
Bitcoin continues to show relative signs of weakness in the market, losing market share to the overall digital assets space. As per usual, there were idiosyncratic plays across the board as the space continues to iterate and evolve:
What We’re Reading this Week
Introducing the Crypto Rating Council
Many in the crypto industry have become frustrated with the lack of clarity from US regulators. It therefore comes as no surprise that last week a group of crypto financial service companies announced they were forming a ratings council. The council’s objective is to use a shared framework for determining if a token is, or is not, a security. You can read more about the framework and the initial tokens it classified here.
Confessions of a Reformed Crypto Doubter
With a shaky start that resembled the dot-com bubble of 1999, Bitcoin’s importance has become ever clearer with recent events. Central banks have continued to print fiat currencies and take on increasing amounts of debt without any regard for how that will debase the monetary system. The US president has become meddlesome in the Federal Reserve’s affairs and a number of 2020 presidential candidates have proposed policies such as student loan and medical debt forgiveness - all without a worry of what impact that could have on capital markets and the broader economy. Like the Internet, Bitcoin has already seen its dot-com bubble, and it will take far less than 20 years for the real bull market to begin.
Libra Association Members Are Backing Out
According to reports, members of Libra’s Association are declining to publicly support the project out of fear of regulatory scrutiny. The partners, which include Visa and Mastercard, initially joined Libra’s Association to take part in the digital currency project after seeing WePay take hold and flourish in China. Meanwhile, Paypal has withdrawn explicitly. These defections could seriously impact Libra’s chances of a successful launch as they are relying on the financial partners and retailers to provide an on-ramp for the currency and a means to spend it.
US Lawmakers Urge the Fed to Consider a National Digital Currency
An open letter from two US Congress members, Rep. French Hill (R-Ark.) and Rep. Bill Foster (D-Ill.), urged the Federal Reserve Chairman Jerome Powell to consider a central bank issued digital currency. They argue that the US faces the risk of being unable to control monetary policy if a private company (Facebook) or another nation (China) creates their own. The letter specifically asks if the Federal Reserve has done any research into digital currencies, including issuance and regulation, and what contingency plans they have in place if other nations issue their own. As China is gearing up to launch its own central bank digital currency, it is comforting to see the US also take the topic more seriously.
The Threat to Limit Capital Flows to China and Pending Impeachment Conflict
Ray Dalio shares his thoughts on how the world economy is set to repeat itself from the 1930s depression with the convergence of three forces: the widening wealth gap, limited ability of central banks to stimulate the economy and the rising conflict between the US and China. He recounts the events of the 1930s and describes how those events are likely to repeat themselves in today’s environment.

The Equity Temper Tantrum Did Not Persuade Digital Assets

When Correlations Break Down in Digital Assets

This is NOT 2017 - Today’s Digital Assets Rally is Sustainable