Written by Jeff Dorman, CFA
Sep 28, 2020
What happened this week in the Digital Assets markets?
Week-over-Week Price Changes (as of Sunday, 9/27/20)
Source: TradingView, CNBC, Bloomberg
The Ongoing Debt Spiral
The ongoing debt spiral at both the government and corporate level has been top of mind for investors in all asset classes. Both central bank and corporate balance sheets are on a seemingly endless march upwards, and Covid-19 has simply accelerated a trend that was already in place.
While none of this is new news, let’s contextualize the rise in global debt for a minute before getting to our broader point (and I promise the end point is NOT going to be another argument for “Bitcoin protects against inflation”). 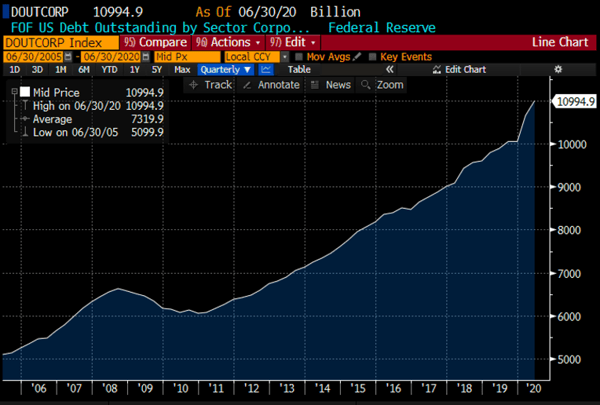 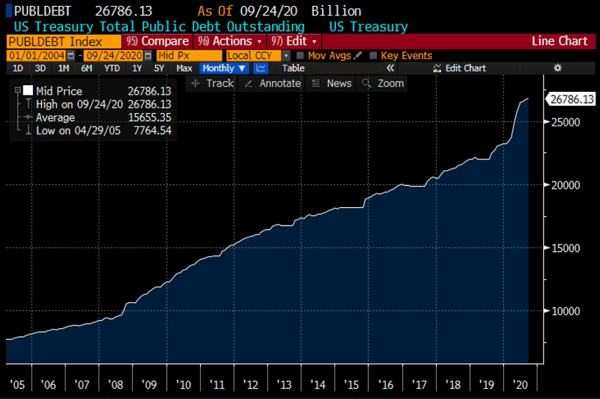 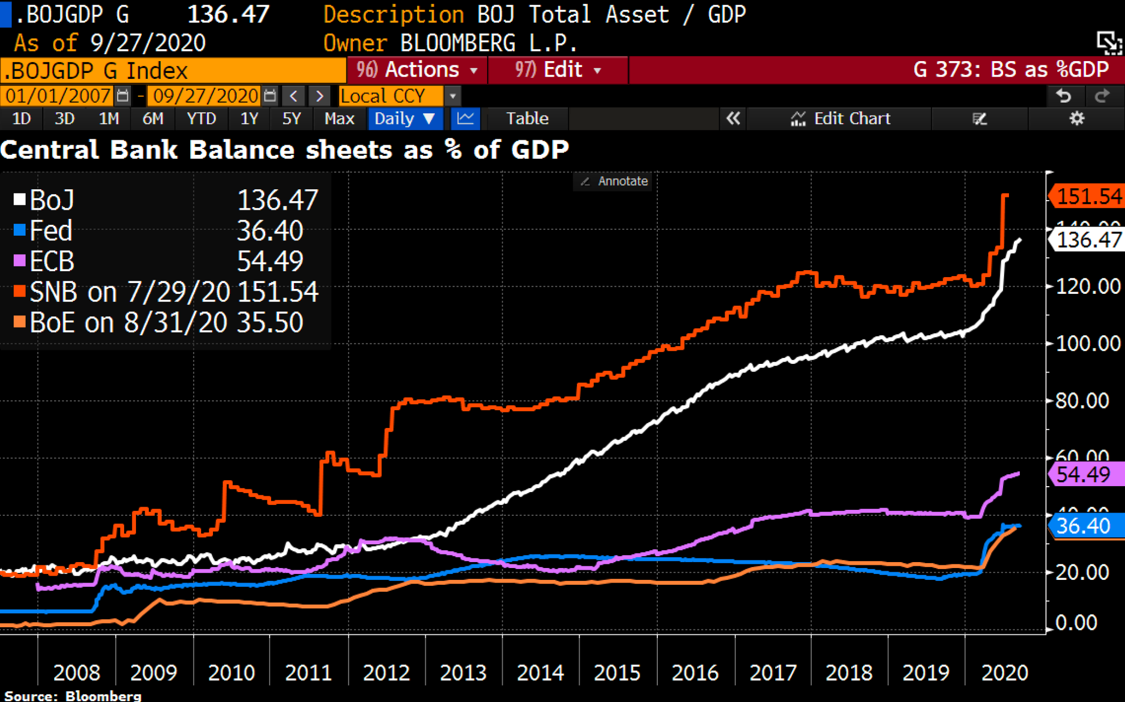 At record low interest rates, debt issuance makes sense, in theory. But with declining corporate profits and shrinking global GDP, the ability to service this debt is obviously being called into question. Corporate leverage is rising, and interest coverage is falling, with estimates that 18% of companies cannot cover interest expense. This doesn’t even include mortgage-backed securities, for which a wave of delinquencies and defaults are likely coming. Warren Buffett once said, "Only when the tide goes out do you discover who has been swimming naked".
One of the arguments for owning Bitcoin has always been that unsustainable government debt levels will inevitably lead to either inflating our way out of debt, or default… both of which lead to loss of purchasing power for those stuck holding fiat currencies. This chorus is getting louder, and louder, and louder, and louder. When companies and governments simply issue more and more debt to paper over a debt problem, there is no end game.
But let’s not forget that much of the government’s increased debt load over the past 10+ years is simply a transfer of debt from private to public. The 2008 financial crisis started this bailout culture, and recent handouts to both corporations and private citizens to combat Covid-19 have worsened the trend.
What if the solution isn’t Bitcoin, but rather, less debt?
Where do Tokens Fit into the Corporate Capital Structure?
For years, we’ve argued that token issuance is now the 3rd part of the corporate capital structure.
Non “crypto-native” companies have yet to embrace tokens as a financing solution, for a variety of reasons including regulatory uncertainty, a lack of education, and no creative investment bankers. Worse, companies for which this is the most obvious solution, like airlines, are simply dipping further into the debt spiral playbook instead of using this more creative and customer-friendly solution. Numerous airlines, who have already received huge government loans and bailouts, recently made headlines for issuing debt backed by their loyalty rewards programs. The airline industry is already plagued with high rates of Chapter 11 bankruptcies due to unsustainable cost structures and low recoveries on unsecured debt and equities due to a lack of unencumbered assets (airlines already issue a lot of secured debt in the form of EETCs - debt backed by planes and equipment). Meanwhile, revenues and profits are plummeting as planes remain grounded.
In the case of the airlines, their equity value is declining due to lower profits, and their debt coverage is falling as they continue to layer on secured debt. But for the most part, airline customers are still around and are willing to fly as soon as it is safe and affordable. Thus, the airlines’ “network equity” and customer loyalty hasn’t decreased. Instead of searching the coffers for unencumbered assets and issuing debt against this loyalty program, they should be raising new, non-dilutive capital in the form of more loyalty programs. This is exactly how token issuance is being used in the small but evolving digital assets industry.
Unfortunately, this is complex. There are a rising number of companies and projects in the “crypto-native” world that are raising capital and bootstrapping growth by issuing “Pass-thru tokens” in an unregulated fashion, but only a handful of companies who have issued “network equity” in a fully regulated manner, which of course public companies would have to do. Both INX Global and Blockstack have issued registered securities in the form of tokens, but both of these companies are brand new startups with no existing customers or business lines. These are more like venture capital token offerings, giving investors a lottery ticket if the projects succeed. It would be much different for a mature public company or large private company to issue pass-thru or hybrid tokens, like one of the major airlines or any other business with a large customer focus (like small gym membership chains, coffee shops or local restaurants). There is something very bizarre about the S-1 filings that may influence the ability for existing companies to follow suit. Even though both INX and Blockstack filed S-1s, performed lengthy roadshows, and raised investor capital, from an accounting standpoint, these token sales are treated as revenue, not capital raises.
In the case of INX:

As is always the case with new technologies, the waters are murky. We are arguing that tokens are part of the capital structure, but in order to fit a round peg through a square accounting hole, companies to date are issuing tokens as deferred revenue. We need more companies to act as pioneers, especially those with large enough legal and accounting teams to get greater clarity. While this is slowly happening completely under the radar with firms like INX and Blockstack, the market is now awaiting a more mature company to push the envelope further and establish repeatable legal and accounting frameworks that make more intuitive sense. As my friend Maartje Bus opined, recent market dynamics are begging for solutions like this to level the playing field and help companies grow again.
Unless of course you think more debt is the best solution to unsustainable bad debt.
What’s Driving Token Prices?
For those that don’t take it upon themselves to watch each tick, this week may have seemed like a bit of a snooze fest - Bitcoin barely budged week over week (-70bps), the rest of the market seemingly kept pace (BTC.D -25bps), and there was even some strength shown by alternative assets (34 out of the Top 100 finished 10%+). For the rest of us, this week had more twists than an M. Night Shyamalan thriller. A rocky start to the week drove the Digital Assets market down 9% (-$30 billion), and then midway through, the market took a metaphorical pirouette, rallying 8% into the weekly close. Beyond all that noise there was quite a sneak peek into what the future of this market may entail:
What We’re Reading this Week
U.S. banks can hold reserve funds for stablecoin issuers, says federal regulator
Institutional Investors Say They’ll Buy More Bitcoin: Survey
Visa’s Crypto Strategy Is Driving Its Next Stage Of Growth
EU Proposes Full Regulatory Framework for Cryptocurrencies

Previous Story
← Are Uni Tokens Subject to Securities Enforcement Action by the SEC?
Next Story
The Magic Word is “Uncertainty” →