Written by Jeff Dorman, CFA
Sep 16, 2019
What happened this week in the Crypto markets?
Nothing Really Mattered -- Which Matters a Lot
Arca is a crypto asset management firm, so our weekly market recap is generally focused on how this small, niche industry fits within the overall global economy and within a broader investment portfolio.  But even if the crypto markets move 100% in a day, the impact on investment portfolios is miniscule compared to what just occurred over the last 7 days in the Oil and Bond markets.
There is no hiding from a 40 bps weekly move in 10 and 30 year Treasuries that affects over $20 trillion in wealth and countless fixed income products, or a 10-20% weekend move in Oil affecting trillions of dollars of wealth and every consumer across the globe.  These are the types of quick moves that precede “Bear Stearns hedge fund”-like massive unwinds, which we will of course only find out about months later even though we’re already hearing about some of the damage caused by these moves.  When the whole world prepares for a recession at once, even the slightest positive news (better economic data, trade war progress) or black swan event (drone attack on Saudi Arabia) can have outsized effects on a crowded trade.
Suddenly, and relatively, crypto doesn’t seem so volatile.
The crypto markets were unchanged last week, and none of the above had any impact on the prices of digital assets.  And isn’t that the whole point? Instead of focusing on what drove crypto prices last week, in the face of massive shocks to financial markets, which only seem more and more likely in the future, perhaps the best thing to focus on is that none of the above mattered at all.
Bitcoin is a risk asset. Bitcoin is a macro hedge. The rest of the digital asset ecosystem is completely different and uncorrelated to everything else in the financial markets.  But instead of focusing on digital assets this week, it’s more important to reflect on the volatility in traditional markets, which is more likely to be the norm than an outlier going forward.  Central Banks pushed everyone into risky financial assets 10 years ago, and they are trying again now as the race to zero (negative) rates intensifies. We live in extraordinary times. There can only be extraordinary outcomes. 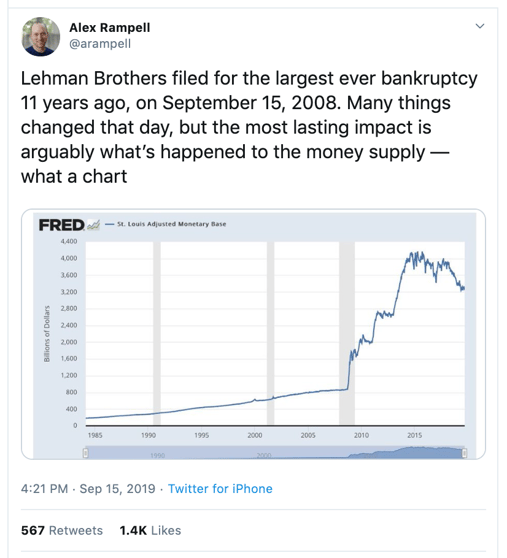 Middle Men Should Be Worried
Every new technology disrupts some legacy system.  Some, like the internet, can completely wipe out incumbents (big box retail, fax machines), while others, like robo-advising, simply force incumbents to adapt their business models.
The jury is still out on whether blockchain technology will wipe out middle-men in traditional finance (banks, brokerages, back-office) or if the incumbents will begin to adapt and adopt.
The bond market is a great place to watch how this unfolds.  Bond trading has been a relic for decades, even as other asset classes have become increasingly more automated.  For over 15 years, firms like MarketAxess, TradeWeb and even Bloomberg have tried to automate the expensive, and opaque, business of trading bonds, but little real progress has been made. Banks and Brokers clearly don’t want this, and asset managers have surprisingly been unwilling to change either.  But automation may finally be taking over. This may or may not be the inflection point for a technological shift. However, the point is that even when it makes complete sense and seems like a for-gone conclusion, it can still take 15+ years (and counting) before anything meaningfully changes.
Meanwhile, Santandar just round-tripped a $20 bn bond issue on Ethereum’s blockchain network. This is evolutionary, not revolutionary, and speaks to what is now capable using blockchain for settlements and back office.  How long it takes before this is the norm remains to be seen.
Notable Movers and Shakers
With the ferocity that Bitcoin normally moves and shakes, weeks like last week feel relatively muted (-1%). It is easy to become comfortable with the level of volatility that Bitcoin offered during the summer months (daily volatility ranged from 3.5-7%); but, for the time being, things have calmed down significantly (2.5%). This relative stability offers favorable conditions for idiosyncratic movements across the board:
What We’re Reading this Week
Dapper Labs Receives $11m Investment from Warner Music
Dapper Labs, creator of the viral Ethereum-based game CryptoKitties, has received an $11m check from Warner Music. In addition, Warner Music is partnering with Dapper Labs to build its own public blockchain, Flow, designed to be faster than Ethereum and host gaming, collectible, and music dapps. This is the first blockchain investment for Warner Music, highlighting the use cases for blockchain technology as music studios look for new ways to monetize in an industry that has suffered in the digital age.
France Takes a Hardline Stance on Libra
The French Economy and Finance Minister announced last week that Europe would block development of Facebook’s Libra cryptocurrency as it “poses a threat to “monetary sovereignty”. There’s been much talk of the effects of Libra on currencies worldwide, especially as the currency plans to peg its value to a basket of fiat currencies with heavy weighting towards USD. The worry for many countries is that a currency such as this creates a large dependence on the USD and removes the ability for central banks to dictate and control monetary policy within their borders. The borderless economy is certainly coming, but a borderless currency - especially one created by Facebook - may not be the currency to connect us all.
Intercontinental Exchange’s Bakkt Gears Up for Launch
Bakkt, the physically-settled Bitcoin futures exchange backed by ICE, is set to launch in the next week. Over the last week it has opened up its warehouse for deposits and shared more details with the public around its operations. The firm will only require a deposit of $3,900 for each of its futures contracts. In addition, the firm reportedly secured a $125m insurance policy and is partnering with BNY Mellon for custody. Many within crypto are closely watching Bakkt’s launch to see if it will bring in new outside capital with its institutionally focused offering.
Blockstack Completes Regulation A+ Raise
Blockstack, which raised money earlier this year from Harvard’s endowment, announced that it has officially concluded its public token offering, raising a total of $23m. Earlier this year, the company completed the filings required to conduct a Regulation A+ fundraise, also known as a “mini IPO”, in which it could sell shares to non-accredited investors and have a secondary trading market for its token. The company reportedly raised money from over 4,500 individuals, however, the process to file for the Reg A+ raise cost the company $2m and 10 months of time.
NBA Player To Tokenize His Salary
According to sources, Spencer Dinwiddie of the Brooklyn Nets, is planning to convert his contract into a “digital investment vehicle”. He has requested the NBA to securitize his contract into a digital token so he can take a smaller lump sum upfront in return for some of his future salary. The details of the securitization are unclear but it’s important to see digital assets being used for novel scenarios such as this.

Bitcoin’s Domination and the Rotation of Capital Vortex