Written by Jeff Dorman, CFA
Jun 15, 2020
What happened this week in the Crypto markets?
Week-over-Week Price Changes (as of Sunday, 6/14/20)
Source: TradingView, CNBC, Bloomberg
Digital Asset Value Investing
Generically, US equities recorded their worst weekly decline since March as fears of a second wave of infections and doubts about a V-shaped economic recovery dampened investor sentiment.  The OECD released its latest forecasts for the global economy last week, and it was quite sobering. The organization emphasized the need to maintain stimulus measures as it predicts a 6% slump in global economic activity this year, or a 7.6% contraction if there is a second wave of the virus. It also warned that any recovery would be uneven, echoing sentiments from the World Bank.
This change in sentiment was true for digital assets as well.  Prices generically fell 5-6% as Bitcoin began to trade tick-for-tick with stocks again, starting with Thursday’s selloff, and many large cap assets followed suit.
We use the word “generically” to describe the overall market, but this is dominated by the high-market cap legacy large-cap tokens, many of which have no value accretion model and have not lived up to lofty VC expectations.  Peeling back the layers of the onion reveals something more interesting, if not outright ironic.  While the equity market has seen a dash for trash in the past few weeks, bidding up zombie equities, bankrupt stocks and companies with 95% declines in revenue, the opposite has happened in the digital assets market.  Bitcoin and the legacy large cap alternative assets have traded sideways to lower, while many small and mid-cap tokens have been buoyed by value investors.  Yes, value investors.
Thematically, the Decentralized Finance (DeFi) sector has been on fire.  DeFi is a broad term applicable to those companies and projects that seek to cut out traditional rent-seeking middlemen such as bankers, brokers and salesmen in a new “open finance” ecosystem. While it has quite a few areas to improve upon before it can be used for anything other than a niche market by curious parties already within the digital asset ecosystem, its growth has been very real.  Many of the top projects have released significant upgrades, rolled out underlying infrastructure for third parties to utilize, and have shown an increase in “Total Value Locked” on their platforms (an indication of heavier usage).  While DeFi projects are still tiny relative to centralized financial solutions in digital assets, and completely irrelevant relative to traditional banking and brokerage, it is nonetheless an impressive feat for DeFi to gain significant traction while the U.S. economy becomes more and more untrustworthy to the average citizen.
Week-over-Week and YTD change for DeFi Tokens 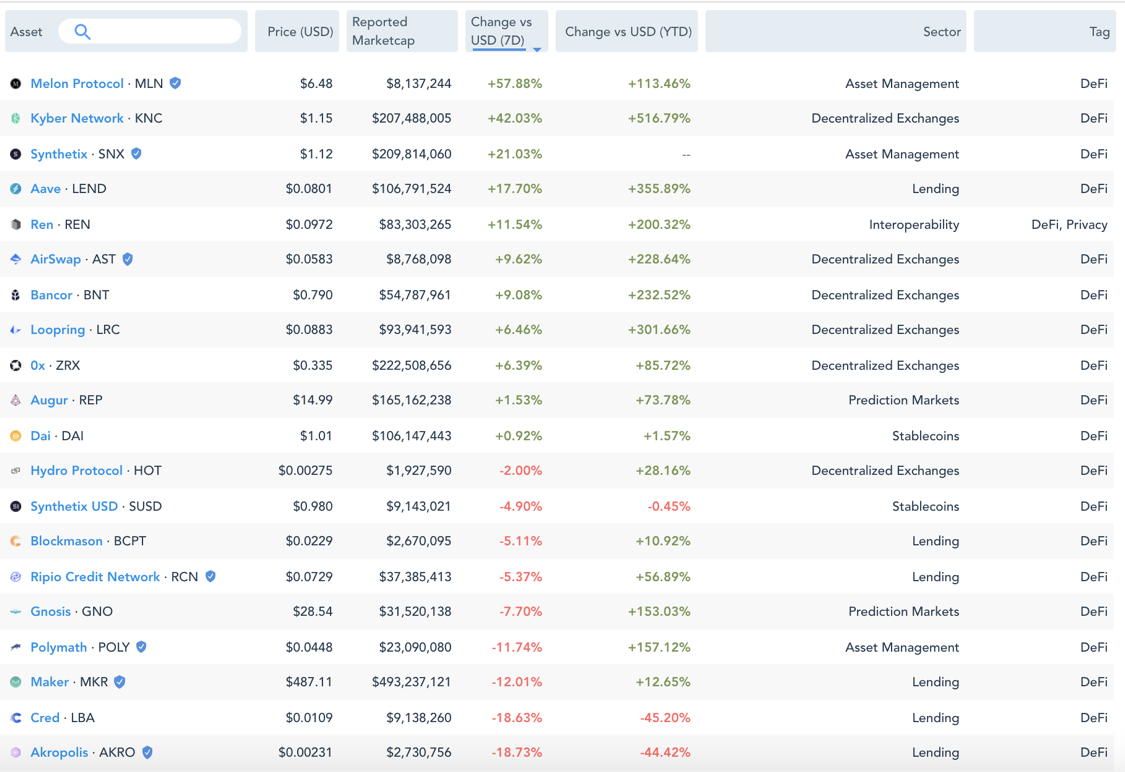 DeFi tokens largely gained last week amidst the broader market rout, with many tokens in this sector posting upwards of 100-500% returns YTD.  More importantly, the majority of these tokens are cash-flow producing entities that can be valued.  As transactions occur on a DeFi platform, a transaction fee is generated, usually in the form of ETH or the platform’s own native token. As such, these earnings can be applied to traditional price / earnings or price / cash flow methodologies.  Further, many tokens produce income in the form of a staking yield.  These are still growth assets mind you, and any rational valuation model will show astronomical multiples to current earnings / yield.  But the fact is, real investors in this space are flocking to these value assets while running from the non-productive “if you build it, they will come” legacy cryptocurrencies and protocols.  And we believe that’s a good sign for long-term health and growth of this asset class.
Just weeks after Goldman Sachs made its case against Bitcoin for, amongst other reasons, the lack of intrinsic value, it’s ironic that the lesser known underworld of digital assets is becoming the heart of value-based investing.  Goldman stated, “We believe that a security whose appreciation is primarily dependent on whether someone else is willing to pay a higher price for it is not a suitable investment for our clients.”  Meanwhile, bankrupt Hertz is offering new worthless shares to the public, and the US government is buying junk bonds. Perhaps Goldman should rethink which asset classes are only bought because someone is willing to pay a higher price.
Robinhood - Steal From the Hedge Funds and Give to Davey Day Trader
So much has already been written about the new paradigm with which equities find themselves, where retail investors are outperforming the best and most successful professional investors by buying speculative assets during this three month rally. 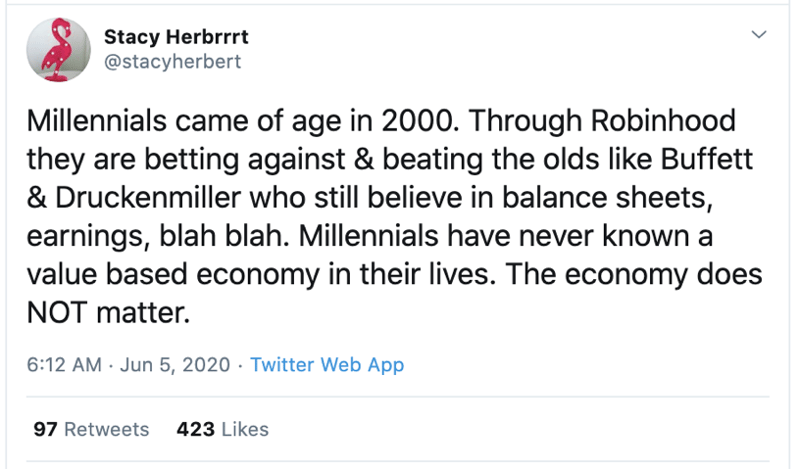 Source: Twitter
According to Bloomberg, “Robinhood added more than three million funded accounts in the first four months of 2020, and half of customers who opened accounts this year said they were first-time investors.”  Not surprisingly, this has led to a sobering rally for the underinvested pros, as every single stock was higher over the past 10 weeks.
That’s fine of course, except for that whole “lack of trust” thing again.  Robinhood uses open source APIs so that everyone can see the trading activity on their platform, which has been a boon for financial journalists reporting on trends, but has also been a windfall for high frequency trading firms who buy the data and act faster than anyone else can. 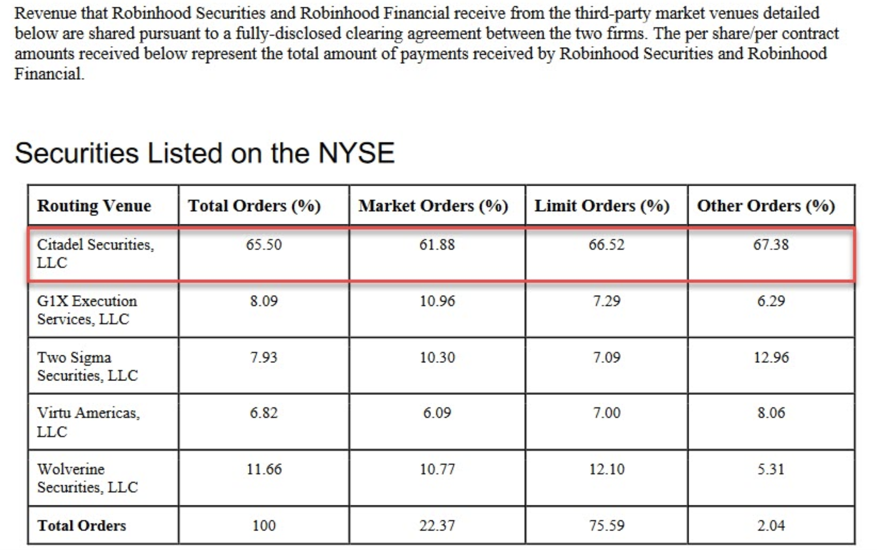 Source: Robinhood / Zerohedge
This exaggerates already large market moves, as the HFTs front-run order flow that is already buying and selling based on momentum.  Said another way, volatility is not going away.
Fast money retail investors and HFTs are dominating the bulletproof equity market. Meanwhile, from Paul Tudor Jones buying Bitcoin, to Fidelity’s institutional investor digital asset survey, to the growth in the CME and Grayscale, institutional investors are flocking to digital assets and now overpowering the once dominant retail whales.
A changing of the guard is afoot.
Notable Movers and Shakers
Bitcoin was not immune to the fear surrounding the potential second wave of the pandemic, as it finished the week down 4% (while BTC.D gained 30bps as Bitcoin outperformed other large caps). As mentioned earlier, the most notable thing to come out of the market last week was a (continued) sector-wide rally in DeFi based tokens:
What We’re Reading this Week
Fidelity Institutional Investor Survey
According to a new study released by Fidelity Digital Assets last week, a growing number of institutional investors believe that digital assets should be a part of their investment portfolios, with 80% finding something appealing about the asset class. Of the US respondents, 22% stated they are exposed to digital assets via futures (versus 9% in 2019), while overall, European institutions were more likely to hold digital assets over US investors (45% versus 27%). The survey confirms the increasing interest and acceptance of digital assets as a new asset class among professional investors.
Vanguard Completes Phase 1 of Digital Asset-Backed Securities Pilot
Mutual fund giant Vanguard completed the first phase of a blockchain pilot last week. The goal of the pilot conducted with blockchain startup Symbiont was to model the full lifecycle of an ABS (asset-backed security) settlement on the blockchain. Vanguard has been exploring how to improve the process of securitization, the practice of repackaging loans into bonds sold to investors, since 2017 with Symbiont. The firm hopes to create faster, more transparent and automated markets via blockchain technology.
European Bank is Ditching SWIFT in Favor of a Blockchain-Based Solution
Liechtenstein-based Bank Frick is reportedly moving away from using SWIFT for cross-border payments in favor of USDC, the stablecoin alternative built by Coinbase and Circle that runs on the Ethereum blockchain. SWIFT, the interbank communication system used for international wires, has long been considered a business that would be majorly disrupted as a result of blockchain technology. Bank Frick stated that using USDC over SWIFT “significantly reduced” processing time. According to Circle’s CEO, the transition away from SWIFT to stablecoin alternatives is an ever-increasing trend among banks as they look for more innovative ways to incorporate blockchain technology.
Microsoft Releases Digital Identity Tool on the Bitcoin Blockchain
ION, the digital identity tool developed by Microsoft, is reportedly moving to the Bitcoin Blockchain for a public beta test. The tool, which was developed with The Decentralized Identity Foundation, aims to provide users greater control over their digital identity credentials in a more decentralized way than current options through Google and Facebook. The ION network is completely separate and decentralized from Microsoft, relying on the Bitcoin blockchain to verify transactions. Digital identity solutions have been on the rise in recent years with large tech companies suffering hacks, exposing individuals’ data. Microsoft’s creation of ION is evidence that decentralized identity tools are the future.