AMC Nonsense Means All Stocks are Going to Zero 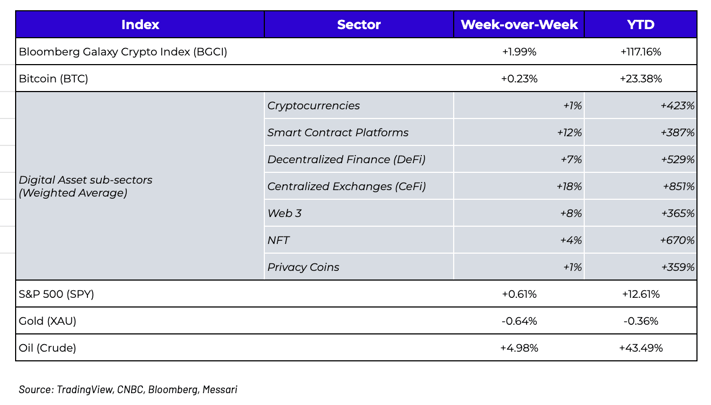 Looking For Greenshoots
After one of the worst months in the history of digital assets, the first week of June showed a resiliency and a resurgence that has become typical for this young asset class.  It wasn’t necessarily an amazing week for price gains per se, but during a period of abnormal fear and uncertainty, investors looked for greenshoots, and two stood out.
First, most of the downward price action over the past three weeks has been driven by regulatory overhang, especially out of China. But last week’s best performing tokens came predominantly from Asian-influenced projects, especially those that had been beaten up the most during the China crackdown selloff.   Filecoin (FIL), Polkadot (DOT), OkEx (OKB), Binance Coin (BNB), Huobi (HT) were amongst some of the market leaders, potentially indicating that the effects of the perceived crackdown are either not as harsh as some think, or that it disproportionately affects Bitcoin over other assets.
Second, retail euphoria is slowly coming back.  DOGE, which may be the best indication of retail fund flows, rose 15% week-over-week, outpacing the market on the heels of its Coinbase listing.  Similarly, many other retail-friendly tokens rose week-over-week, primarily due to increases in futures trading, a sign that retail investors are willing to use leverage again in search of amplified gains. DOGE alone saw a 63% spike in open interest last week.  Similarly, the equity put/call ratio fell to multi-year lows (0.44), another sign that levered interest is back.
In an otherwise slow week of trading, the story of retail investor interest may be the most relevant, only it isn’t coming from DOGE or digital assets.  Instead, the focus is back on Reddit meme stocks, and what it means for both the equity and digital assets markets.
The Media is Biased With Regard to Treatment of Outliers
AMC stock rose 86% last week, on a massive spike in volume, as Wall Street Bets once again took on Wall Street.  Blackberry (BB, +40%), Bed Bath and Beyond (BBY, +18%) and Gamestop (GME, +12%) were of course not far behind.  Everything about AMC last week was crazy - from the unnatural gains, to the rope-a-dope private stock sale to Mudrick Capital that they quickly exited, to the seemingly unfazed reaction to AMC issuing even more shares.  As fascinating as this saga was, it was much more interesting watching the media coverage of this story unfold than the story itself.
Behavioral psychology is an important topic in investing, particularly around human bias.  This may come as a surprise, but AMC Entertainment is not exactly a thriving business model.  Therefore, if the stock trades up 86% in a week (and +2400% YTD), it must be that this is an outlier and not at all a reflection of a broken equity market.  It’s amazing how quick the media rushes to dismiss and discredit an outlier like AMC in order to defend the sanctity of our all-mighty, pure, and fair equity markets, which of course cannot and shall not be tainted by such a ridiculous outlier.
Yet in digital assets, we see the exact opposite.  How many articles have been written dismissing the entire digital assets market because of DOGE’s mysterious rise, or because Litecoin (LTC) and Bitcoin Cash  (BCH) somehow still have $10 bn+ market caps?   In digital assets, a single outlier is used repeatedly as an example to discredit an entire asset class, whereas in equities, this same exact outlier is swept under the rug.  Nothing to see here folks -- equities still matter!
Some who have built their entire media personas on the sanctity of fair equity markets even find the need to somehow tie AMC’s ludicrous rise back to digital assets.  Joe Weisenthal of Bloomberg wrote this week:

“The unforeseeable scenario is not that suddenly the stock is uncovered as a fraud or a Ponzi or something, but rather that a global flash mob suddenly and inexplicably descends on it. Of course this could be a stock or a memecoin or anything else. From zero to a million in no time. Now, people joke about hoping that the Reddit crowd stumbles upon their favorite holdings."

I’m sorry, but what does AMC have to do with “memecoins”?  Somehow, everything that doesn’t fit a preconceived bias of how markets are supposed to work must therefore be comparable, despite having nothing to do with each other.  And it's not just the equity markets…. close to $20 trillion of negative and low yielding debt spits in the face of interest coverage and leverage, but where are the articles about how Greece’s absurdly low yields invalidate the entire bond market?  The media continues to discuss the bond market as if it’s a going concern.  Per Deutsche Bank:

“The spread of Greek 10-year yields over bunds fell to its narrowest level since 2008, at just 107bps. That’s a far cry from the peak in the early 2010s when the restructuring of debt and the European sovereign crisis saw spreads spiral.  What’s even more remarkable however, is that this tightening has come in spite of the fact that Greece’s public debt has continued to climb since then, and now stands at more than 200% of GDP thanks to the pandemic.” 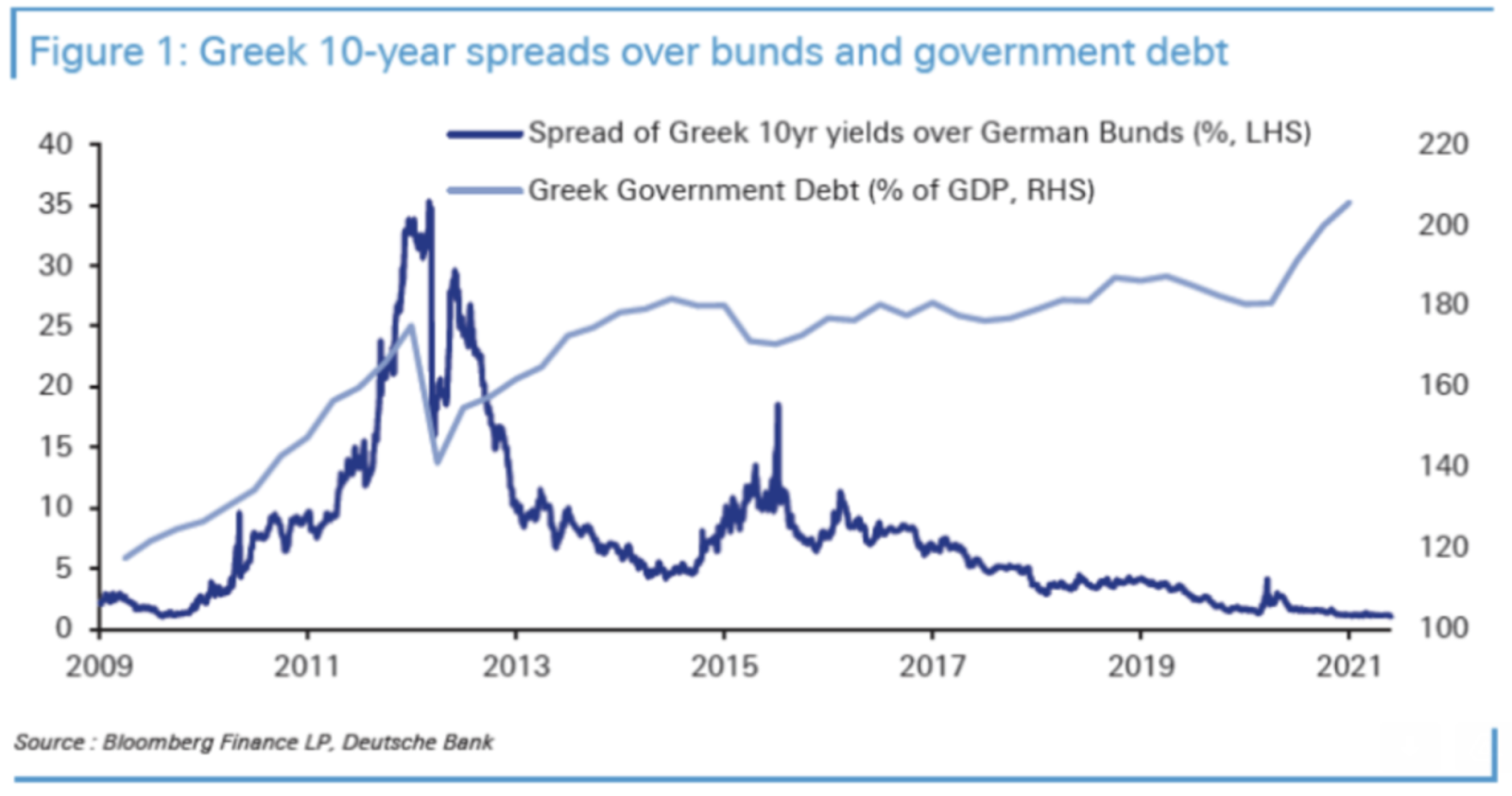 Source: Deutsche Bank
Matt Levine of Bloomberg even wrote a whole piece mocking AMC’s decision to award shareholders with free popcorn, writing, "If you buy AMC stock it comes with popcorn is the greatest capital-markets innovation of the century".  Of course that was written in jest, and for good reason as free popcorn is hardly a reason to own a $24 billion market cap company.  But instead of mocking it, these journalists would be better off researching the meteoric rise in Binance Coin (BNB), Chiliz (CHZ), Axie Infinity (AXS) and other token issuers that have become multi-billion dollar enterprises doing just this -- combining financial value and member benefits into one instrument, thereby encouraging customers to become stakeholders and turning them into loyal, sticky customers who evangelize on their behalf. To the uninformed, the growth of digital assets looks like hype, and of course AMC is a ludicrous fringe example of how to execute this, but there are plenty of examples in the digital assets space where the “stakeholder rewards” do create real economic value.
This concept is very likely the future of capital markets, and we’d be better off studying the success stories rather than laughing at the outliers.
Dual Financial Paths
Of course, AMC stock was once again halted, either because of excessive volatility or because margin calls and collateral issues once again plagued the brokerage risk models. This was poetic, especially on the heels of last month’s nasty market correction in digital assets where not a single bailout, circuit breaker or market interference was implemented nor necessary to keep the market operational.
While Arca is a believer that regulation is a necessary and welcome next step in the maturation and institutionalization of digital assets, it is also fun to think about what would happen if this never actually came to fruition.   Can we have two completely different, parallel financial systems, one devoid of regulation and interference but full of constant price and overhang risk, and another legacy system with all sorts of rules and interference, eliminating any price risk until the systemic risk is too overpowering.? It would be like a Charles Darwin experiment where one species is forced to evolve on different islands, and we get to compare the results.
Which island do you want to live on?  The regulated island that we all find comfort in is probably the answer… but there is something quite beautiful and pure about this other untouched island across the proverbial sea.

Sushiswap puts the S and G in ESG