Written by Jeff Dorman, CFA
Mar 22, 2021
What happened this week in the Digital Assets markets?
Week-over-Week Price Changes (as of Sunday, 3/21/21) 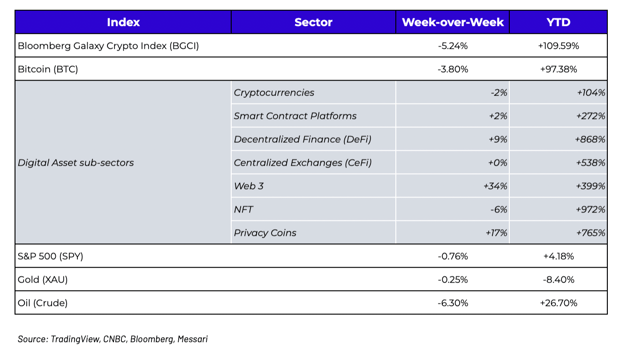 A Sea of Calm
Every month, we get important economic data.  Every six weeks, we get an FOMC meeting.  This information used to drive markets.  Now, the data is basically meaningless.
On Wednesday, the VIX closed at 19.2, the lowest level since the start of the pandemic last spring.  This happened during a week when the Fed upgraded its economic growth outlook and inflation forecast while reiterating that interest rates will remain near zero well into the future, and during a week when February retail sales came in at -3.0% month-over-month, the largest decline since April 2020, well short of the consensus market forecast of -0.4%, and a huge decline from the +7.6% jump in January.
Ten years ago equities would have fallen -3% on a headline whiff like this.  Last week, markets were unchanged.  Traders used to sit in silence at 8:29am EST in anticipation of the retail sales number; now traders go get their bacon, egg and cheese sandwiches during this time. That’s how meaningless the data has become.  The combination of the implicit Fed market put (bad news is good news) and the fact that all data is now leaked ahead of time to prepare markets (BofA warned that retail sales would be awful) has completely muted volatility.
And that’s by design.  The number one goal of the Fed and the Treasury department seems to be to suppress volatility so markets will continue to rise.   For the most part, it has been working. But this is also why the few truly unexpected events (like a pandemic) crush markets.  Like a forest that hasn’t been allowed to naturally burn, occasionally, a big fire gets too far out of control.
The Fed continues to do everything it can to convince markets they have everything under control.  Meanwhile, overseas, the Turkish Lira just dropped ~15% on Sunday, approaching a record low versus the dollar, after President Tayyip Erdogan stunned investors by replacing the hawkish central bank governor with a critic of high interest rates.  Central Bank control is fickle.  It’s a stark reminder of just how reliant we’ve become on Central Banks around the world.  We also quickly forget that Japan is the only example of a country avoiding default once government debt exceeds 130% of GDP.  The US debt load now stands at 128% (and will likely continue to rise).  Perhaps that control, like market volatility, is somewhat artificial.
For every reason why Bitcoin’s price may not make sense (and there are plenty), this week served as a good reminder for why it does make sense.

Operating Leverage - Galaxy Digital (GLXY) stock jumps 57% on Morgan Stanley news
One year ago, Galaxy Digital’s (GLXY) stock price traded below $1.00.  Six months ago, it traded under $3.00.  As of their last official quarterly numbers (3Q 2020), Galaxy had just $82 million in assets under management in their passive Bitcoin and Index products.  Today, it is roughly $1 billion, aided by the 10x growth in price as much as by inflows.
On Friday, GLXY hit $28, adding almost $1 billion in market capitalization this week alone on the heels of news that Morgan Stanley added 2 of their funds to its $4 trillion wealth management platform.
One new client (Morgan Stanley), one single asset (Bitcoin) -- $1 billion of market capitalization appreciation.  If you’re wondering why everyone is rushing to buy stocks of digital assets companies right now, this is why.  The operating leverage to both Bitcoin’s price, and to new money coming in from the sidelines is simply enormous.  From Bitcoin mining stocks, to sell-side firms like Galaxy, to the upcoming Coinbase direct listing, to private companies like BlockFi (and Arca) -- there is a good ol’ fashioned Wall Street land grab going on right now.  And rightfully so.  The world’s wealth is controlled by Wall Street and FinTech, and one-by-one, they are all changing their tune, and so are institutional investors.
How It Started v. How It's Going 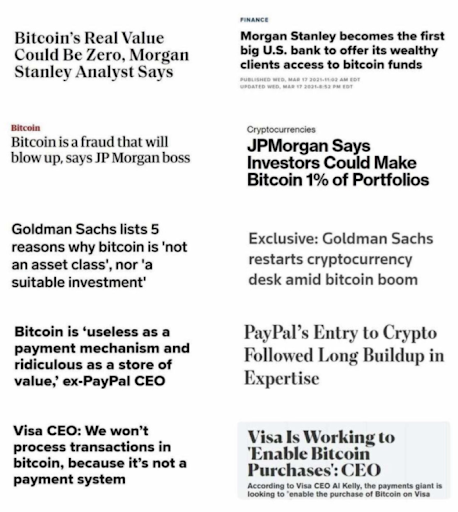 Source: LinkedIn
We talk to investors every single day.  Most are still just getting over the Bitcoin hump.  What do you think happens to these equity valuations when investors, Wall Street and FinTech executives start to realize that Bitcoin is actually tiny relative to what is being built on the rails of other digital assets?
Web 3.0 tokens jump 34% last week
One of these non-Bitcoin opportunities is Web 3.0.  Collectively, tokens of Web 3.0 projects gained 34% last week.  Web 3.0 broadly describes the next evolution of the internet - one which incorporates new technologies to promote greater connectivity, data sharing and openness.  The growing distrust of institutions over the last decade, particularly towards financial corporations and governments, is fostering a move towards systems and organizations that reduce middlemen and rely less on centralized intermediaries. The impact of this change is twofold: first, eliminating middlemen reduces costs and processing times across a number of industries. Second, the act of decentralizing control away from single entities redistributes wealth and power into the hands of many.
While a full transition to Web 3.0 has a long time horizon, it is starting to take shape in real-time today with projects like those listed below.  We’ve seen growth in decentralized file storage, data archiving, web browsing, content creation, wireless networks, GPS, video transcribing, and much more. Censorship and government control has been the kind of topic that is often only talked about in the context of other countries, as it can’t possibly happen here in the U.S.  Except it has… over and over and over.  It’s like a walking advertisement for Web 3.0.
Money is flowing from Wall Street into Bitcoin, and from Bitcoin into other digital asset technologies.  In three years, we’ll likely see the same Wall Street land grab long after most of the early gains are already made. 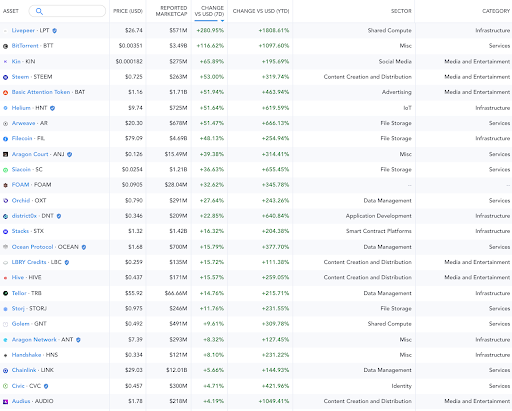 Relatively speaking, this was a tepid week for the entire market (BTC -3.8%, ETH -3.7%) - the calmest weekly move for both since January. When there’s a continuous fire drill since the beginning of the year, at some point the fire feels normal, which may help explain the snoozefest. We don’t expect this to last for long, especially with three scheduled Chairman Powell meetings, monthly/quarterly expiry, and the supposed direct listing of Coinbase shares around the corner.

What We’re Reading this Week
India to Propose Cryptocurrency Ban, Penalising Miners, Traders
In Sign of the IPO Times, Coinbase Chooses Reddit Over a Road Show
JPMorgan is Looking for a Crypto Clearinghouse
Morgan Stanley to Offer Rich Clients Access to Bitcoin Funds
Korean Crypto Trading Volume Has Surpassed The National Stock Exchange
BitMEX Founder Arthur Hayes Intends to Surrender Next Month on a Proposed $10 million Bail
And That’s Our Two Satoshis!
Thanks for reading everyone!
Questions or comments, just let us know.