“That’s Our Two Satoshis” — How Many Times Can Bitcoin Rally on the Same News?

Written by Jeff Dorman, CFA
Feb 16, 2021
What happened this week in the Digital Assets markets?
Week-over-Week Price Changes (as of Sunday, 2/14/21) 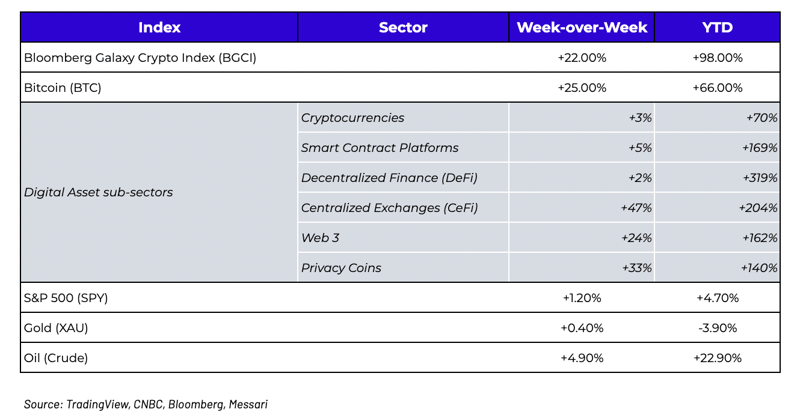 How many times can bitcoin rally on the same news?
It turns out...quite a few.  Last week, bitcoin rallied multiple times throughout the week, ultimately gaining 25%, as a plethora of “new” announcements about increased adoption sent bitcoin incrementally higher.  In fact, it may have been the heaviest news week on record.
The last few announcements weren’t even announcements -- they were announcements about possible future announcements.  These bitcoin soundbytes have been coming fast and furiously since early 2020 when Paul Tudor Jones first made it socially acceptable to talk about bitcoin publicly, and the floodgates have been open ever since with major announcements coming from asset managers, insurance companies, corporate treasury departments, FinTech companies, legacy financial institutions, celebrities and government officials.  While some of these announcements have been very well thought out (like those from Paul Tudor Jones, Microstrategy and Ray Dalio), the more recent ones can be summarized as follows:

“We don’t know much about bitcoin or cryptocurrencies or digital assets, and we certainly don’t have anything new to add, but we are getting involved now because everyone wants us to, and now that we are, we’ll write the exact same opinion research piece that everyone else has written, and then we’ll go on CNBC or Bloomberg and talk about our newfound expertise.”

That’s not even meant to be demeaning.  There simply isn’t that much new to say about bitcoin at this point -- it’s an incredibly complex technology with an incredibly simple investment thesis.  In totality, of course, all of these announcements matter a great deal.  We’ve gone from “the institutions are coming” to “the institutions are here”.  But at this point, each and every scenario for new adoption should already be baked into the market price.  Markets are driven by expectations, not reality, and at this point it should be 100% expected that more “adoption announcements” are on their way.  And per the law of diminishing returns, each incremental announcement should have an incrementally lesser effect… but in reality, the opposite is happening.  Each incremental announcement is causing even more excitement.
Take Tesla for example.  Bitcoin has now rallied three different times on Elon Musk / Tesla related bitcoin news -- when Musk first tweeted about bitcoin in December, when he changed his Twitter profile to “#bitcoin” a few weeks ago, and ultimately when the Tesla 10-K revealed that Tesla had purchased $1.5 billion of bitcoin.  This is certainly not insignificant news  -- but it also doesn’t create a material change of opinion for most investors. If your base case was that no other corporate treasury departments would ever buy bitcoin, you’d be crazy and already very wrong before this news came out.  If your base case was that every corporate treasury department would buy bitcoin, then Tesla’s announcement is just N = 1, and it wouldn’t change your view materially. Therefore, the only significant news here is that the media and retail love everything related to Elon Musk and bitcoin.  It’s certainly a marginal net positive, but it mostly just validates whatever thesis most everyone already had, rather than introduce a new data point.
Bitcoin price action following three (arrows) significant Elon Musk / Tesla related Bitcoin announcements 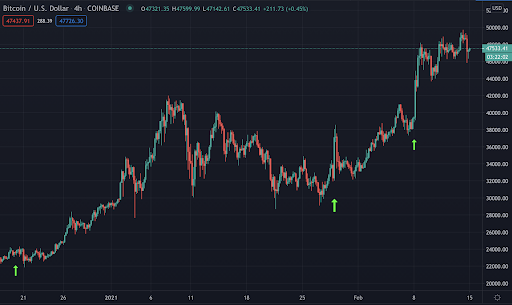 Source: TradingView / Arca Estimates
This may just end up being the year of announcements, where the market decides that each new data point is important even if it ultimately changes nothing. We see this in more traditional markets too, usually during bull markets when analysts and traders are just looking for any excuse to take positions higher. Equity and rates markets often react each time a Fed governor speaks, even if the individuals simply reiterate what was already said at a previous FOMC meeting.  Similarly, when a company pre-announces earnings and then ultimately releases actual earnings weeks later, you often get a response to both events even if it should have already been priced in.
The only new news here is that public companies will do whatever it takes to make their stock prices go higher, asset managers will do whatever it takes to attract new investors, and financial institutions will do whatever it takes to attract and retain customers.  As such, these announcements are not going to stop, because they are working.  Back in August 2020, we wrote:

“...corporate finance departments are always paying attention to what their competitors are doing, and what drives their stock prices higher. With that in mind, a small business intelligence company, Microstrategy, announced last week that it purchased 21,454 bitcoin as part of its capital allocation strategy (~$250 million). The purchase was done in an effort to “maximize long-term value for shareholders”.  MSTR stock jumped 20% following the announcement last week, most likely leading to long weekends for junior employees at corporate finance departments around the world as they furiously research bitcoin. Remember back in 2017 when companies would go out of their way to mention “blockchain” on earnings calls even with no knowledge or intention of how to actually use blockchain, simply because the market was rewarding companies for being ahead of the technology curve? Get ready for bitcoin redux.”

The future has become the present.
The Wall Street rush will expand beyond bitcoin to other categories of digital assets
When Teslacoin?   This is actually a great question. 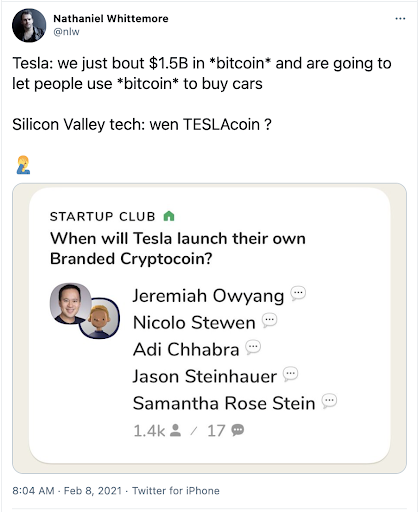