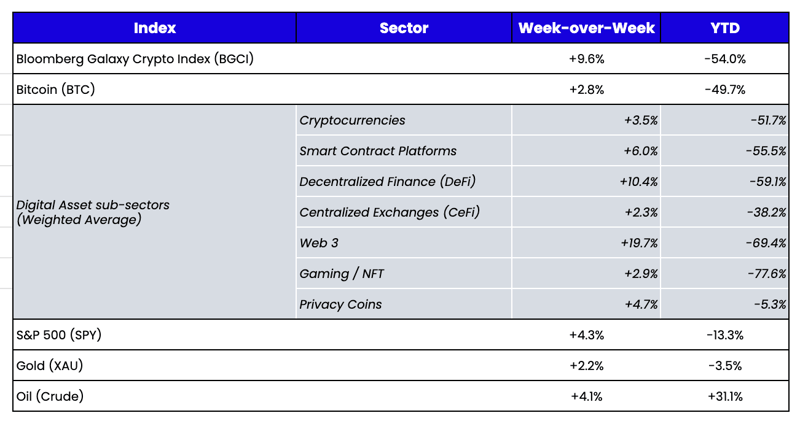 Source: TradingView, CNBC, Bloomberg, Messari
This week's edition is written by Wes Hansen, Arca Managing Director of Trading and Operations
“It’s supposed to be hard. If it wasn’t hard, everyone would do it.” -A League of Their Own
The past four months have been among the most turbulent times I’ve witnessed in five years as a professional digital assets trader. While turbulence has occurred in previous bear markets, this time, the poor operations and risk controls from some of the largest service providers and sell-side firms in this industry caused a majority of this trauma.
In the digital assets space, it is common to expect that an exchange hack or a smart contract exploit is always looming. And experienced investors always make sure to account for this risk. For the most part, these incidents have been isolated, and though some of the exchange hacks, fund blowups, and smart contract exploits happened in bunches, they have been largely uncorrelated. However, in the first half of 2022, a single failure set off a cascade of events that exposed the long-simmering problems below the surface of the ecosystem.
The event that set everything off was the collapse of Terra and UST, which led to some massive bets from Three Arrows Capital, Roger Ver, and others in the space. However, the Terra collapse differed from others because it was more about faulty design and opportunistic investors. However, this singular event exposed rampant operational oversight and an impressive list of additional problems:
The Terra collapse shed light on the interconnectedness of this space—a single platform and fund kickstarted the various bankruptcies and price collapses that have occurred since mid-April when Bitcoin was trading at $40k and Ethereum close to $3k.
The unwinding of Terra and UST caused significant principal losses; it removed the primary yield generative asset on the market (before its collapse, UST was netting investors 20% APY on Anchor). It soon became evident that investors—and, shockingly, retail-focused lenders—relied on these artificially high yields to enhance their returns. From there, it only took one margin call to set off the cascade of liquidations, with loans called, leveraged trades unwound, and customer withdrawals halted. We’ve now seen Three Arrows Capital—one of the largest crypto funds—unwind and file for bankruptcy, along with the largest retail-focused lender, Celsius, medium-sized exchange Voyager, plus unknown damage at other firms such as BlockFi, Babel, and Genesis.
It is likely that some bankruptcies and firm failures will still occur, but with every failure, we learn what was under the surface at each firm as cases work their way through various legal systems. From the Celsius lawsuit, we have gotten a glimpse of the activities behind the scene. If the allegations prove true and this pattern of behavior is seen at other firms, there is a high likelihood that criminal proceedings will follow.
“Every Strike Brings Me Closer to the Next Home Run” - Babe Ruth
The upheavals have prompted surviving firms to clean up their acts. And those that prioritized operational excellence—once considered a determinant of profitability—have capitalized on the carnage. The trend of shoring up operations will lead to a more robust industry.
The Terra and UST collapse caused every lender to panic. Un-callable loans were being called and collateral liquidated, which exposed over-leveraged borrowers; that, in turn, also exposed many lenders. As a result, every sell-side firm began temperature checks and due diligence reviews for clients, which usually only occurred periodically.
Once firms became comfortable with their clients, many started asking for color on what else was happening in the space and speculating about what was still to come. Interestingly, from our experience, the companies with the poorest operational controls had the most questions for us, which in hindsight, was an indication of their own internal concern.
Similarly, a month or two after the Terra and UST collapse and the widespread fallout from Three Arrows’ gamble on the $28K price of Bitcoin, asset managers, in turn, started reviewing all of their counterparty relationships. From some of Arca’s due diligence calls, we learned:
As companies push through the debris and pause for internal reflection, people have started to shift focus to examining the space at large. Some companies are learning from their competitors’ mistakes, while others are trying to grab a larger market share. The firms that did take a beating will be re-evaluating their business models and working to improve them. Every firm in the space is stronger than they were five months ago. They are:
Every firm shares the common goal of ensuring that this market cycle does not end with a years-long recovery process. The digital asset industry is already seeing a complete revamp of the lending space, including rates, borrow/lend duration matches, collateral requirements, oversight, due diligence, and less accommodative terms. OTC trading partners are starting to ask for more information and will likely refresh relationships with clients at regular intervals.
Even the exchanges have started to ask for more information and are working to understand their clients better. Some of this is due to more watchful regulators. Still, much of the the exchanges’ shifting behavior was motivated by the realization that they knew little to nothing about the companies they dealt with in this space. Despite this scare and the resulting reactions, we’ll emerge in 2023 and beyond as a much stronger industry for new investors to begin allocating capital.
And That’s Our Two Satoshis!
Thanks for reading everyone!
Questions or comments, just let us know.
The Arca Portfolio Management Team
Jeff Dorman, CFA - Chief Investment Officer
Katie Talati - Director of Research
Hassan Bassiri, CFA - Portfolio Manager
Sasha Fleyshman - Portfolio Manager
Alex Woodard - Research Analyst
Nick Hotz, CFA - Research Analyst
Bodhi Pinker- Research Analyst
Wes Hansen - Director of Trading & Operations
Mike Geraci - Trader
Kyle Doane - Trader
David Nage - Principal, Venture Investing
Michael Dershewitz - Principal, Venture Investing
Michal Benedykcinski - Research Analyst
Andrew Masotti - Trading Operations
Topher Macpherson - Trading Operations