What Happened This Week in the Digital Assets Markets?
Week-over-Week Price Changes (as of Sunday, 3/27/22) 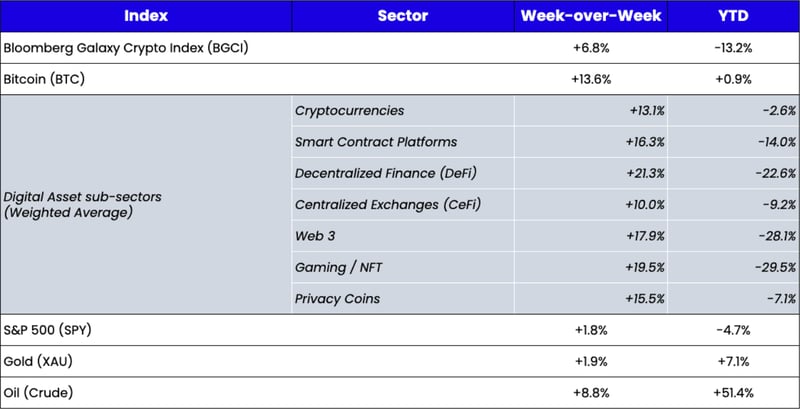 Digital assets gapped higher last week, following the lead of equities—both of which have put up back-to-back winning weeks. This acceleration is polarizing investors, who are now trying to ascertain whether this is just a classic dead cat bounce or the start of a more sustainable uptrend. So let’s peel back the onion a bit.

Financial assets have been battling three major themes so far this year:

Both digital asset and equity markets have begun to look past #1, as rising rates have historically led to positive outcomes for risk assets. The market is increasingly looking past #2—there have been recent signs of de-escalation, and eventually, this war will end. That leaves us with #3; are we heading towards an inevitable recession? If so, what will be the impact on digital assets?

Let’s assume a recession is certain, and we’re staring down the barrel of years of stagflation (high inflation and low growth) and rising rates—a situation in which few asset classes would be safe. In this scenario, the different value drivers of equity, debt, and digital assets may begin to manifest. All three asset classes arguably comprise the new "capital structure," but each creates value differently. As we’ve argued numerous times in the past—most recently during a fascinating interview with Raoul Pal of Real Vision—we can break down the capital structure as follows:

Given this backdrop, it’s possible digital assets are the only asset class that a recession wouldn’t negatively impact. Tokens allow companies to turn intangible assets like their brands, customer loyalty, and networks into tangible assets. Companies and projects in the digital asset world pre-fund themselves via the sale of tokens, thereby creating a service liability in how the token is ultimately redeemed in the future. The token can unlock usage of the product, can be used for discounts on services rendered, or in some cases, can even gain economically via direct claims on future revenue. This process is similar to companies that sell gift cards, which tend to speed up revenue recognition (booked upfront), but create a liability for the company in terms of future services/products delivered. Notably, these future services don’t disappear during a recession and, as such, technically do not lose value.

Conversely, most digital asset companies and projects don’t have physical stores, customers, or supply chains. They are the epitome of a truly digital world. From digital asset trading exchanges to video games and the metaverse to decentralized finance and web 3.0, the shift from physical to digital is happening, and it is largely immune to rising rates, decreased earnings, and lower GDP. Further, while debt and equity valuations are hampered by lower terminal values when interest rates rise, digital assets act more like a perpetual annuity. Therefore, valuations are not heavily impacted when doing a discounted cash-flow model.

The prices of digital assets may, of course, still go lower. After all, risk is risk. But fundamentally, digital assets are not actually losing value, whereas the value of stocks and bonds most definitely will. Equity value declines as profits decline. Debt value declines as asset value declines. Fiat currency devalues due to a loss of confidence and inflation. While some may argue that digital assets never had value to begin with, it is hard to make an argument that their value decreases due to recessionary factors. In fact, it may be the only asset whose true value remains unchanged or even grows.

Therefore, it’s unsurprising that we continue to see more TradFi participants entering the digital assets arena. For example, just this past week, we saw:

Overall, investing becomes more difficult when investors focus on “return of capital” over “return on capital.” But a "sell everything and move to cash" approach isn't practical—shorts/cash get tired/anxious, and money has to flow somewhere. Fixed income is largely uninvestable right now, and so is half of Europe/South America/Asia due to geopolitical tensions and restrictions. S,o where do we expect money to flow?

As the digital assets market matures, more and more investing themes emerge. One could argue that there have been four real successful applications of blockchain technology to date:

If you predicted all of these investment themes, congratulations! But it was just as important to determine the best way to invest in the success of these themes. Many Bitcoin copycats failed. Many stablecoin projects died. Most DeFi projects never got off the ground. Most NFT collections and marketplaces are in the rear-view mirror of the clear market leaders. Even so, there were a lot of winners with unicorn status.

“Pure play” investing allows you to simplify a view down to a single investment that takes other factors out of the equation. Let’s look at a few of today’s investable themes and a few examples of “pure play” ways to express those themes.

This is not meant to be an exhaustive list—many other tokens fit in these categories. Some will be winner-take-all, others will benefit from the rising tide that lifts all boats. And I certainly left off some investable themes—either because I don’t agree with them (privacy tokens) or because I haven’t thought of them yet (TBD). But in today’s market, simplistic "pure-play" thematic investing will likely help investors hone in on a specific outcome.

What We’re Reading This Week

Thailand Bans Use of Cryptocurrencies as a Method of Payment

No Bosses: What It’s Like Working at a DAO