What happened this week in the Digital Assets markets?
Week-over-Week Price Changes (as of Sunday, 11/01/20)
Source: TradingView, CNBC, Bloomberg
Bitcoin’s Weekly Strength Was Phenomenal
The S&P 500 fell almost 6% last week, its worst weekly decline since the week ending March 20th.   In fact, last week marked the 11th time this year that the S&P 500 closed more than 2% lower than where it started the week. According to Edward Jones, since 2010, the yearly average is around six times. Oil (-10%) and Gold (-1%) didn’t fare much better last week, volatility jumped 40%, and the yield on the 10 year US Treasury rose to 0.879%.
Amidst this backdrop, somehow Bitcoin rose 5% for the week, and +28% for the month of October.

Source: Twitter / @Travis_Kling
We’ve spent a lot of time this year talking about how the “on again, off again” correlations between Bitcoin and other asset classes are spurious at best.  Larry Cermak at The Block went even further, illustrating how correlations only seem to pick up for short spurts following periods of heavy equity selling, before reverting back to no correlation.  Still, to see Bitcoin move the way it has in October amidst carnage everywhere else is pretty impressive.
Bitcoin is no longer part of the digital asset universe.  It is now part of the global currency universe.  And while the narrative all year has been focused on the weaker US Dollar, the reality is, most emerging market currencies have actually gotten crushed versus the dollar this year.  Bitcoin’s strength is therefore nothing short of phenomenal.

Source:  Bloomberg, Twitter / @dlacalle_IA
Operating Leverage and Value Traps
While Bitcoin bucked the global trend, the rest of the digital assets universe continued to act independently and inversely correlated to Bitcoin.  Most protocol and platform tokens fell 5-10% last week, while small cap pass-thru tokens fell 10-20%.  On average, small cap tokens, especially those associated with “DeFi”, have fallen 53% over the past two months.
These past few months served as a reminder that no matter how good the future opportunity set looks, no one really knows what will happen day-to-day, week-to-week, or month-to-month.   Outside of Bitcoin and Ethereum, the rest of the tokens in existence are issued by small-cap companies and newly formed projects, and therefore have a lot of upside and downside leverage to small changes in metrics, news and information flow (or lack thereof).  This is akin to investing in the equity of highly indebted companies. When debt/cap ratios are high, companies have significant operating leverage, meaning that very small changes in revenues and EBITDA can lead to very big changes in market capitalization.
In September and October, we saw this high operating leverage unfold in the digital assets space.  Many companies and projects have experienced tremendous fundamental growth this year (yes, fundamentals), but the slightest pullback from a torrid pace of growth resulted in very large and swift declines in token price. 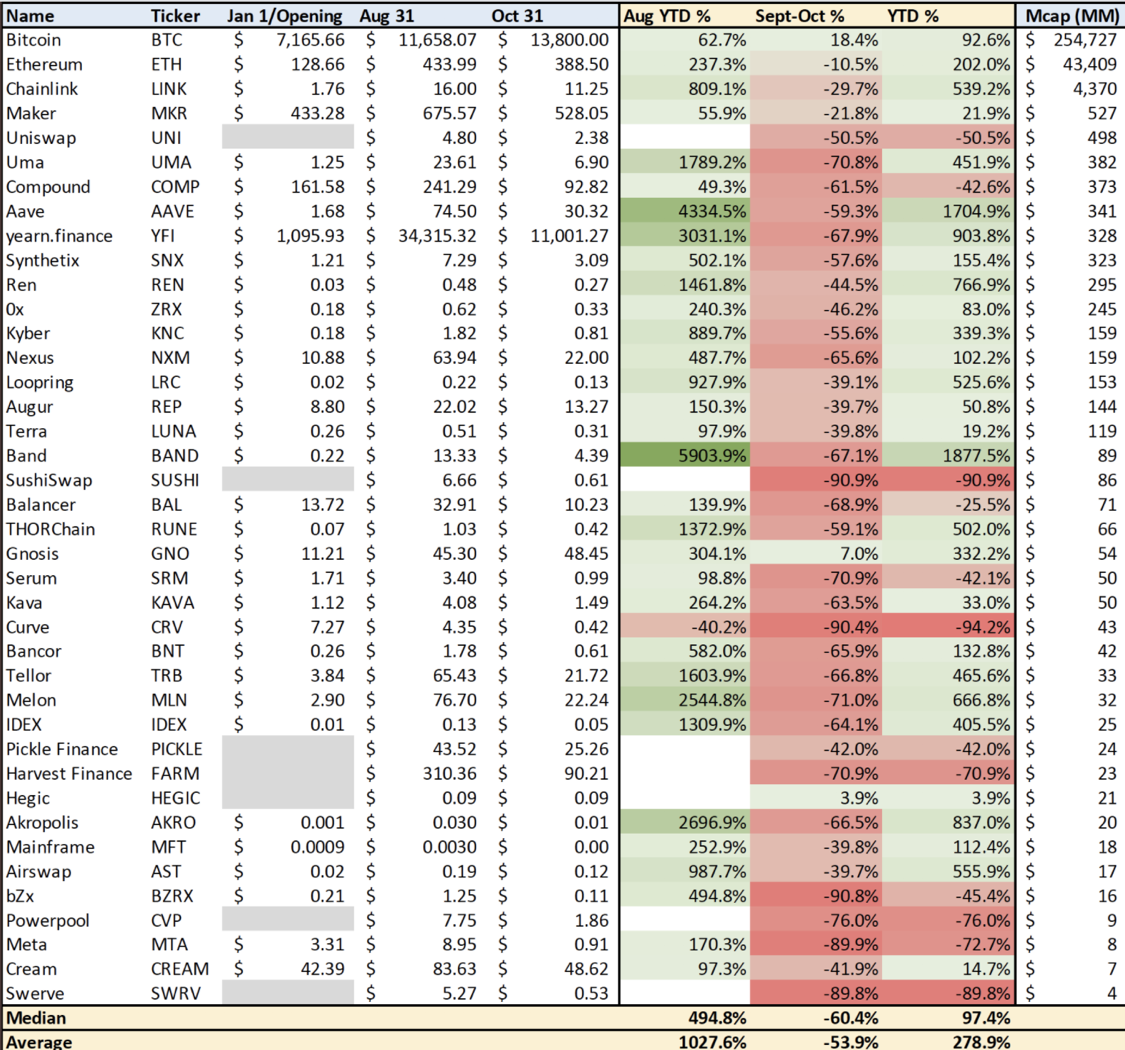 Source:  Twitter / @ceterispar1bus
We may have just witnessed the first ever “Value Trap” in digital assets.  While many digital assets naysayers will continue to force an out of touch narrative that “tokens have no intrinsic value”, the reality is those tokens with intrinsic value (real earnings/revenues) suffered the most the past few months.  The market now finds itself in a weird place.  Money is flocking into Bitcoin just as Bitcoin is removing itself from the digital assets microcosm and is graduating towards the global stage. Meanwhile, the digital assets market was built on tokens that have no value or purpose (i.e. XRP, XLM, BCH, ETC, LTC), which attracts a significant amount of quantitative and arbitrage trading flow but no fundamental analysis.  And now we have a wide array of projects that are actually accruing real economic value (i.e. BNB, UNI, MKR, HXRO, DeFi tokens, etc), but not enough value investors exist in the space yet to take advantage of this.  Further, many companies and projects have been forced to shy away from these value accrual mechanisms due to uncertain regulatory environments.  Changpeng “CZ” Zhao, the CEO of Binance, told The Block in April 2019:

“We removed the profit language because some regions tend to associate profits with securities, and we would like to distance BNB from that. So going forward, we plan to describe the burn this way, and burn what we burn.”

What a weird dynamic.  After years of fighting the “Digital Assets have no intrinsic value” argument, we now have tangible value accrual, but the token issuers themselves have to pretend there isn’t.  At the same time, poor debt and equity investors are still pretending that their investments do have intrinsic value, which couldn’t be less true anymore after decades of declining cash flow, higher debt loads and weaker debt covenants.
While the past few months were painful for digital assets value investors, the growth in the space is undeniable.  Looking at what happened to Bitcoin’s price after just a handful of new macro investors entered the market gives you a glimpse into the future of what will happen to the rest of digital assets once value investors enter as well.
What We’re Reading this Week
JPMorgan Creates New Unit for Blockchain Projects, Says the Technology is Close to Making Money
Grayscale's 2020 Bitcoin Investor Study
SoFi Receives Conditional US Regulatory Approval to Establish National Bank
Iran Amends Law to Allow Imports to Be Funded With Cryptocurrency
Coinbase's Crypto Debit Card is Launching in the U.S. and Lets Users Earn Back Bitcoin