“Crypto Indexes” Are an Absolute Farce

Written by Jeff Dorman, CFA
Jan 19, 2021
What happened this week in the Digital Assets markets?
Week-over-Week Price Changes (as of Sunday, 1/17/21)
Source: TradingView, CNBC, Bloomberg
“Crypto Indexes” are an Absolute Farce
The digital assets market was on fire last week, with some of the biggest broad-based weekly gains we’ve ever witnessed.  No, this is not a joke.  Yes, I know the table above indicates the exact opposite.  But the digital assets market actually exploded higher last week… you just wouldn’t know it based on how this industry continues to be covered, both from a media standpoint and from a passive index benchmark standpoint.
This isn’t the first time we’ve discussed this problem, but it is getting worse.  Much worse.  Bitcoin was down 4.5% last week after a violent leveraged unwind on Monday resulted in a 20% peak-to-trough correction, causing futures liquidations of almost $3 billion in the process.   Most “crypto indexes” were down similarly throughout the week.
BTC Long Liquidations hit almost $3 billion on Monday alone

Source: Bybt.com
But after Bitcoin stopped going down, and chopped around for the rest of the week, just about every other type of digital asset that isn’t represented in a “crypto index” rallied, many in the +50-100% range last week.
Every sector other than “Cryptocurrencies” had an amazing week 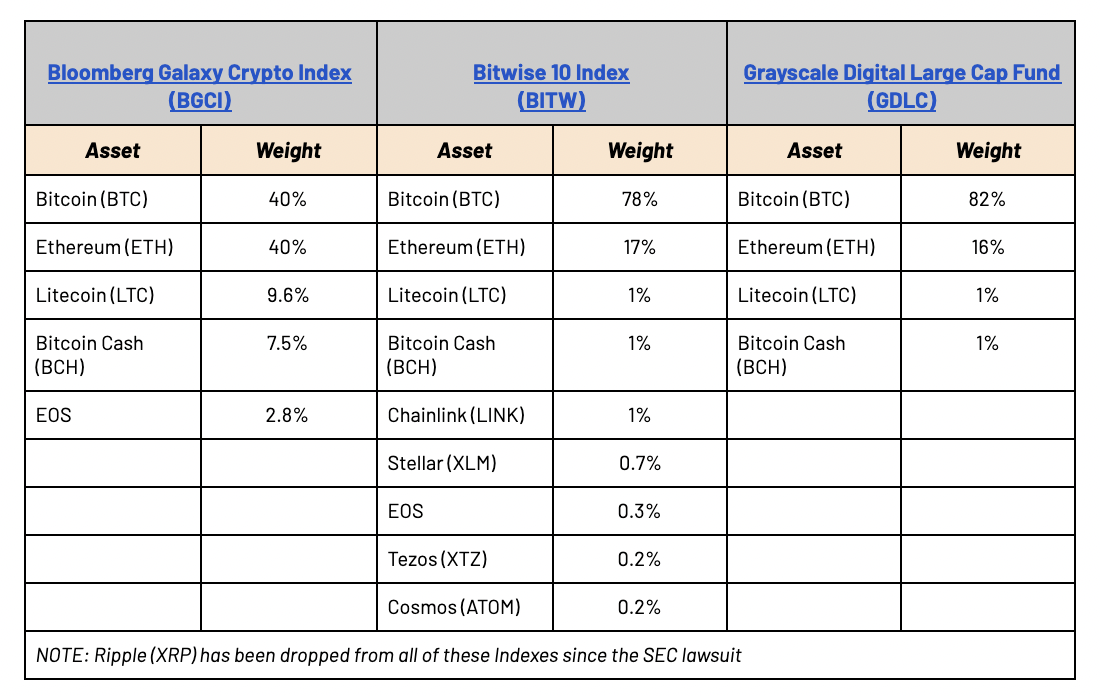 These are absolute jokes.  Each of these indexes is over 90% weighted to two assets (BTC and ETH, as LTC is essentially the same thing as BTC from a correlation and beta standpoint).  Aside from Chainlink, not one of these indices contains a single asset that a legitimate fundamental fund manager or independent research firm would ever write a research report about or take to Investment Committee.  And we’re not just saying this because Arca runs a research-based actively managed fund.  It's actually the converse: we run a research-based actively managed fund because it is the only way to get true exposure to the growth in this amazing asset class.  As we wrote six months ago:

“Every investor gets some things wrong; that is to be expected.  But there is nothing worse than when you get the investment idea right, but express that view incorrectly.  And that is happening more often than not in digital assets because the investable products available to most investors no longer accurately reflect the industry.”

There is a good reason why bond investors differentiate between the Barclays Aggregate Bond Index versus the high yield bond index, the investment grade bond index, and the municipal bond index.  There is good reason why equity investors differentiate between the MSCI World Index versus the S&P 500, Russell 2000, Nasdaq and sector ETFs.  Could you imagine taking a technology index seriously that just refused to include internet and social media stocks?  That’s essentially what these “Cryptocurrency Indexes” are doing as their outdated, market-weighted rules-based approach is ignoring the real growth of the industry.
Further, in the past six months, we have seen an explosion in investable Bitcoin products.  From Grayscale to 3iQ to Skybridge to NYDIG, not to mention a variety of publicly traded equities of mining companies and brokerages that essentially just track Bitcoin, there are now ample Bitcoin-only product offerings. Any investor who wants to get Bitcoin exposure can now do so easily.  Do we really need a “Crypto Index'' that is 80% weighted to Bitcoin?
To illustrate what these indices are missing, the following is a small, select subset of real projects and real companies with investable tokens, and their 7-day returns last week (to see a comprehensive list, click here). If you’re tracking an index that doesn’t include, or at least mention some assets like these, you are just not getting an adequate representation of this growing asset class.

That sure seems like a much bigger investable opportunity set than a “diversified” basket of Bitcoin and Ethereum.
Tether Fears and FCA Warnings are Back
It’s not a bull market until the “bubble” and “fraud” allegations resurface.  Last week, the FCA warned customers about the risks of investing in firms that promise high returns related to "cryptoassets", citing high risk as a reason to be gun shy.  Not to be outdone, an anonymous author once again resurfaced arguments against the largest stablecoin (Tether USDT), specifically, that the only reason Bitcoin has risen is because of fraudulent creations of Tether.
Let’s start with the FCA.  We agree with them -- investing has risks, and we applaud any organization that helps retail investors stay safe.  Though it is a bit hypocritical that a residential mortgage broker can tell a homeowner whatever they want with regard to seemingless guaranteed upside when you buy a house, yet they are so worried about a digital asset industry that is 10x smaller and has no brokers. Nonetheless, this warning rings true.  Stay safe and be careful.
The second argument regarding Tether being a stablecoin printed out of thin air for the sole purpose of manipulating Bitcoin’s price is just pure nonsense. This article makes the following illogical argument:

People convert dollars, yen and euros into Tether, and then Tether is used to buy Bitcoin -- therefore, there isn’t real demand for Bitcoin because if there was, these people would just buy Bitcoin directly with dollars, yens and euros.  Therefore, both Tether and Bitcoin must be fraudulent.

This is the equivalent of saying that parking meters are fraudulent because you have to convert dollars into quarters before using parking meters, and if it wasn’t fraudulent, people would just jam the dollar bills into the parking meters.
Independent of your feelings regarding Tether’s parent company and its legitimacy, the fact is that it is still very difficult to use traditional banks when dealing with digital assets.  Despite the progress from the OCC, many banks and brokerages still deny customers the ability to interact with any company labeled as a digital asset company.  Therefore, it is very hard to go directly from dollars, yen or Euros into Bitcoin.  As such, the Tether (USDT) stablecoin became an on-ramp solution.  Is it perfect?  Absolutely not.  Is it 100% backed by US dollars?  No one knows for sure.  But is there real demand for Tether from investors (typically overseas) who want to get out of their local currencies into USD assets, and then use those USDT to buy Bitcoin?  Yes, unequivocally.
The author then urges well capitalized hedge funds to try to break the peg by shorting USDT until it breaks.  Sure, this could work.  If you short enough of an asset, the peg will probably break.   Similarly, if every owner of Apple stock sold all at once, or every owner of government bonds sold all at once, those markets would structurally break too.  That doesn’t make something fraudulent; that means if supply is greater than demand, a price will go down.
We challenge our assumptions every day, and constantly look for reasons that we’re wrong rather than confirmation that we’re right. But this article’s argument should be flat out dismissed.
What’s Driving Token Prices?
As alluded to above, Bitcoin took a breather (-4.6%, BTC.D -2.75%) while the rest of the market rallied. This is the second straight week where the rest of the market pushed higher at the expense of Bitcoin, which is currently consolidating after making new all-time highs. While there are numerous projects that posted gains last week, we focus on two distinct events that specifically propelled the respective assets higher:
What We’re Reading this Week
Winklevoss Twins Consider Taking Gemini Crypto Exchange Public
Morgan Stanley Boosts Stake in Bitcoin-Laden MicroStrategy to 10.9%
In a First for the Crypto Industry, Visa-backed Anchorage Gets a Federal Bank Charter
ECB’s Christine Lagarde Says ‘Speculative’ Bitcoin Needs Global Regulation
Goldman Sachs Exec Says More Institutional Investment Would Calm Bitcoin Volatility
Kentucky Lawmakers Propose Tax Incentives to Draw in Bitcoin Miners

Previous Story
← Announcing our Series A Funding Round
Next Story
Bitcoin Down; Most Everything Else Up… Again →