“That’s Our Two Satoshis” — The Digital Assets Rally About Nothing

“People seem to misunderstand the global scope of the SEC. In fact, they don't make the world's securities laws. They will hunt people down all over the planet who rip off Americans. Big distinction. Our regulators aren't telling Dubai, Singapore, London what to do. XRP-Ripple could see a deathknell here but I don't know why they couldn't move elsewhere, pay the fine - which will be gargantuan - and soldier on. Steve Cohen of Point 72 once paid nearly $2 billion for a legal infraction. Last month, he bought the New York Mets. And he didn't even have to leave the country. We'll see more of this in crypto and traditional finance in the years ahead. It's what's called "regulatory arbitrage". And it won't go away.”

He’s exactly right.  Ripple didn’t fall 45% because the SEC is tired of Ripple continuously selling tokens to American retail investors.  Ripple fell 45% because the token has no value proposition other than being liquid and available to trade on exchanges.  The XRP token was being sold for years in a perpetual 2017-like fundraising ICO, but never created any value. Everyone who did any research whatsoever knew this, and very few institutional investors owned it. It simply has strong name-brand recognition, and retail investors gobbled it up, not too different than when Hertz filed for bankruptcy and retail investors bought the stock even though it is almost certainly worthless. The only interesting news related to Ripple is that because their token has no value, and because they kept selling it, the SEC basically shut down their ability to do so, and as a result, all of these exchanges de-listed it. It doesn't change the value proposition (there never was one), it just changes the ability for traders to trade it.  Ironically, the XRP token may actually become more valuable now.  Since trading can no longer be the driving force of demand, Ripple will be forced to actually come up with a use case and a value proposition for its XRP token.  The flexibility of token structures means we probably haven’t heard the last of XRP.
Perhaps more interesting are the implications for U.S. companies and investors going forward. While we applaud regulation, it’s not a great look for the U.S. to be on the small list of banned countries that include Cuba, Iran and North Korea.   It will be difficult to become a digital assets powerhouse when we’re alienating all of the talent working in this space. 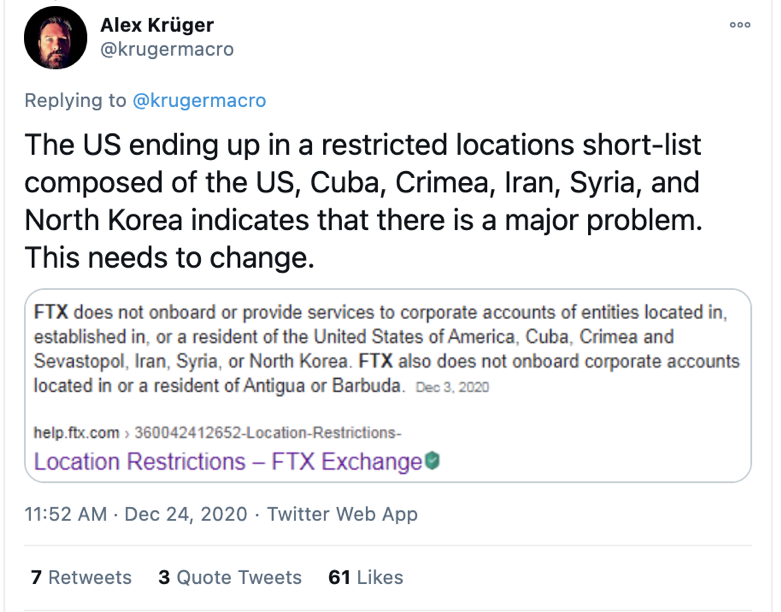 What’s Driving Token Prices?
With Bitcoin posting its fourth consecutive week of double digit gains in confluence with a broad stock market rally and increased talks of a larger stimulus package around the corner, there is a heightened awareness around the digital asset market. Of the Top 100 assets by market capitalization: 84 finished the week positive, 57 finished up double digits, 30 finished up 25%+, and 11 finished up more than 50%. These kinds of moves are bound to breed intrigue, but on a week like this it’s hard to give more than a generic blanket statement about the potential of this space. There were a few updates, roadmaps, and partnerships; however, by and large the market traded together throughout the week and nothing stood out as a driver. As such, this week we abstain from individual movers and look forward to idiosyncratic movements returning in the following weeks.
What We’re Reading this Week
FinCEN Wants US Citizens to Disclose Offshore Crypto Holdings of $10K+
OCC - US Federal Regulator Says Banks Can Conduct Payments Using Stablecoins
Bill Miller 4Q 2020 Market Letter
Crypto Exchange Bakkt Nears Merger With Victory Park SPAC
Coinbase Hits Number 30 in the Top 100 Free Apps on Apple's Mobile Store