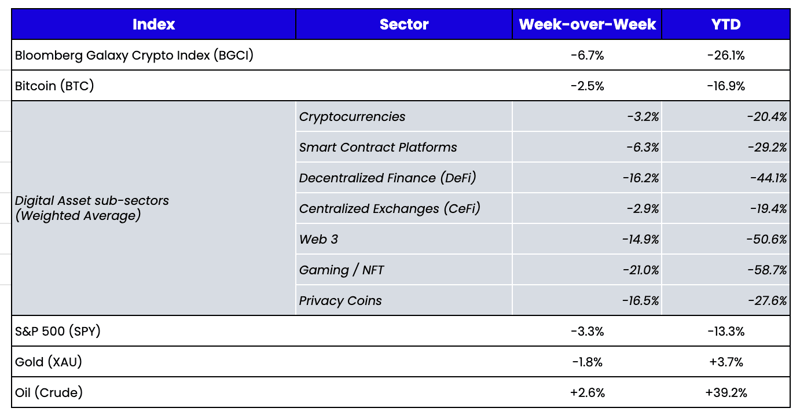 Source: TradingView, CNBC, Bloomberg, Messari
An Ugly Close
The table above looks ugly, yet it may even paint a rosier picture than what investors experienced first hand. The equity market sell-off accelerated into the Friday close, with the Nasdaq (-3.9% WTD) and the Russell 2000 (-3.9% WTD) closing at the day’s lows, putting an end to an even worse month (S&P -8.7%, Nasdaq -13.2%—the worst monthly performance since September 2008). The 60/40 portfolio didn’t get bailed out by bonds either, as 10-year rates rose 60 bps in April despite a mild rally into month-end. As Jim Reid at Deutsche Bank pointed out in a client email, there have been only three months since 1973 where the S&P 500 fell more than -5% and US Treasuries fell more than -2%. Global bond and stock markets are now down almost $25 trillion since the peak in November 2021. Meanwhile, the U.S. Dollar (+1.7% WTD, +4.7% MTD, +7.6% YTD) continues its rise to a 20-year high.
Putting this in context, there is an argument to be made that digital assets are holding up relatively well. In fact, Friday was one of those days where many market participants were waiting for the shoe to drop, but it just didn’t happen. Some were even waiting for a month-end rally since April has historically been one of the best months for digital asset returns (BTC +37%, ETH +28% on average). And since correlations with equities have been at all-time highs, and thus weekends with equities closed have been so muted, there was hope that digital assets might get away unscathed. But a quiet Saturday on the last day of the month turned out to be anything but. Digital assets flat out puked on Saturday, falling 10-20% in short order for most tokens other than BTC and ETH. The sell-off quickly became known as “Scarlet Saturday,” as it was driven by a flurry of negative news, including Solana going down again and another DeFi hack.

Source: Twitter
The most challenging part of this bear market is that there are signs of life at all times, even as the broader market gets sold. For example, the new APE token, which is a governance token that was partially air-dropped to those in the Bored Ape Yacht Club community, rose +40% during the week before crashing back down to unchanged. The market cap of APE reached a value of $6B ($22B fully diluted), meaning that at one point, the APE token surpassed the entire BAYC NFT market cap, and APE token volumes surpassed many of its counterparts. Similarly, GMT, a new token in the “move-to-earn” category, shot up over +20% for the week before coming back down to earth. These brand new “ICOs” aren’t supposed to trade up like this in a bear market, but the fact that they did shows just how much money there is sloshing around in digital assets, with investors looking for any good reason to put it to work. As one trader put it, the tokenization of NFTs and their communities are taking away market share from other ‘traditional’ tokens.
And therein lies the problem. We can go on and on about how the data shows incredible fundamental growth in DeFi, Stablecoins, and Ethereum in general. Still, the market continues to fixate on flashy new tokens and private rounds while using the public secondary market as a cash register and a means to reduce broader macro risk. As a result, we’ve seen the total market capitalization of all digital assets fall much less than the price of each individual component, as the barriers to entry for new tokens and the willingness of investors to get in on something new has sucked the life out of existing projects—even those that are delivering. Unlike equities, where the path from VC -> public funds -> retail is a much more defined and smooth path, many publicly traded tokens don’t have much support in between VC and retail. It will be interesting to see how the incredibly well-funded venture capital funds aim to solve this problem. With a coffer of freshly raised cash and new investments, those returns aren’t going to look so great if they don’t find a better way to sell tokens into the market. 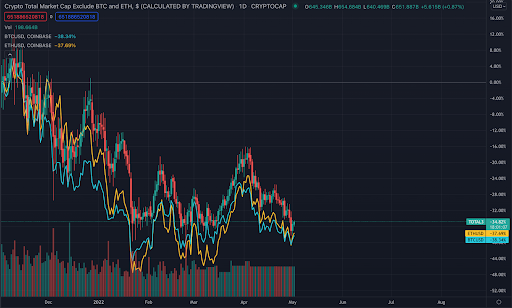 Source: TradingView
Institutional Data Points
Last week, Goldman Sachs offered its first bitcoin-backed loan. While the details are scarce, it demonstrates the willingness of institutions to utilize new tools with old techniques. Everything about this is interesting—from the lender (Goldman) to the collateral (BTC) to the clientele (a Goldman client who was willing to structure a deal like this with a newbie to the digital assets arena). These types of bilateral agreements are rarely done in a vacuum; it is far more likely that Goldman is seeing a lot of demand for this type of transaction and is just testing the waters before making a bigger splash.
Similarly, Genesis, the digital asset market’s largest lender and the closest thing the industry has to a true prime broker, recently issued its “Q1 Market Observations” report, and the results similarly point to institutional adoption.
The team at Rapture did a good job summarizing the report:

The main takeaway from these numbers is that derivatives notional value outpaced spot volume by more than 2x, displaying that institutions in crypto are opting for derivative products more than spot. Interestingly, $4.7 billion of the $27.8 billion worth of derivatives notional value traded, or 17%, came from altcoin derivatives. This number was the highest yet for Genesis, indicating that institutional interest is expanding beyond BTC. Another supporting data point is that the Genesis derivatives desk traded 61 different assets in Q1 2022.

Additionally, the fact that Genesis started with mining companies and VCs before acknowledging their conversion of TradFi asset managers to the space indicates that a more crypto native audience still dominates the institutional world.”

My Bank Forced Me to Use DeFi