What Happened This Week in the Digital Assets Markets?
Week-over-Week Price Changes (as of Sunday, 4/10/22) 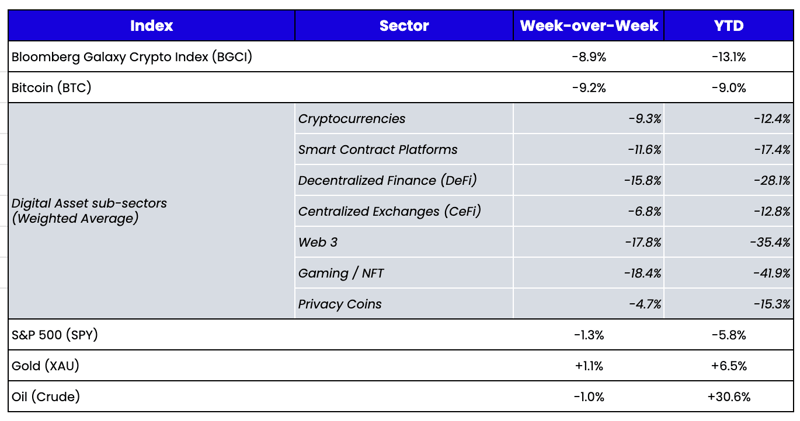 Source: TradingView, CNBC, Bloomberg, Messari
Correlations, the Fed, and… It Probably Doesn’t Matter
Digital assets declined last week; they remain highly correlated to equities and are highly correlated to each other. That’s pretty much all we’ve been writing and reading for the past two months. It’s both true and also not that true.
I left Wall Street eight years ago because I no longer believed that my skills in analyzing income statements and balance sheets mattered as an investor. My job had been reduced to merely dissecting what the Fed said every six weeks. We invested in individual debt and equity instruments simply as vehicles for expressing a broader macro outcome. Default rates were low, and cash flows and profits had become meaningless indicators of returns. Macro trumped it all.
Digital asset investing rejuvenated my interest in analyzing companies and projects. For most of the past five years, the Fed and the macro regime were largely irrelevant in relation to picking winners and losers amidst a completely new taxonomy of investment instruments. So many different types of tokens accrued value in different ways—amortizers, inflationary tokens, currencies, speculative protocols, cash-flow producing tokens, utility tokens with supply sinks, etc. But last week, as the 10-year Treasury yield increased by another +38 bps, and both digital assets and equities fell sharply after more jawboning by Fed officials, it became clear that the Fed is in control of digital assets for the time being. The correlation between ETH and the Nasdaq continues to rise, and there are now only a handful of tokens that have positive returns YTD.
90-Day Correlation Between ETH and NDX 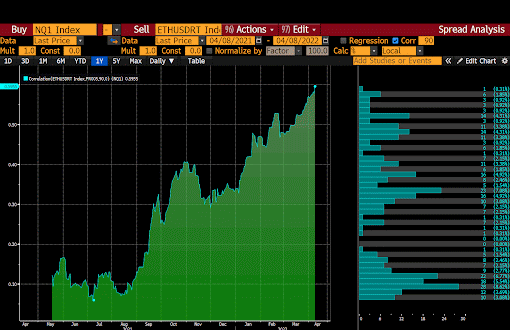 Source: Bitmex, Arthur Hayes
On a day-to-day and week-to-week basis, it feels as if nothing matters other than the Fed’s sound bites. But in reality, over the last 12 months, the digital assets market has just done very little. The total market capitalization of digital assets has been largely unchanged over the last 12 months, following the incredible explosion in prices in 4Q 2020 and 1Q 2021. It's possible the Fed and the macro picture have little to do with digital assets, and instead, the market chop is just indicative of a listless, boring market waiting for the next major catalyst to increase fund flows and adoption.
Total Market Capitalization of Public Digital Assets

Source: CoinGecko
While the total market cap is unchanged, the dispersion of asset prices over this same 1-year period has been wide. There are clear winners and losers and clear sectoral bias as new narratives, themes, and success (or failure) stories emerge. This is a healthy, natural progression. Those projects that achieve true product-market fit benefit, while those that fail to gain traction die off. As a new technology underpinning many areas of finance, gaming, social, and even B2B, this seems like a normal path of adoption—periods of overall strong growth (4Q 2020- 1Q 2021) where correlations were extremely low, followed by periods of malaise where most capital just rotates within the system. Perhaps the Fed and inflation are just the topics du jour used to mask the choppiness of a market with no clear direction.

Moving forward, sure, the Fed and macro picture matter. But does anyone really believe that the Fed is in control here? In August 2020, Fed Chairman Powell aggressively pursued higher inflation in a speech from Jackson Hole:

Powell was not alone in his fight to inflate: 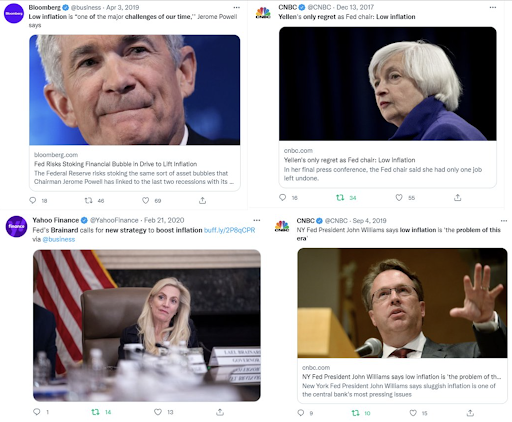 Source: Twitter
Today, the inflation that the Fed caused and miscalculated is startling them. And markets are putting a lot of faith in the Fed’s ability to stick with, and execute, a telegraphed plan to combat it, increasing expectations of rate hikes to 9 from 3 earlier this year, even as the forward curve is already pricing in rate cuts again as early as 2023. The same Fed that in 2020 projected a greater than 2% inflation rate while at the same time projecting numbers that contradicted their own projection. 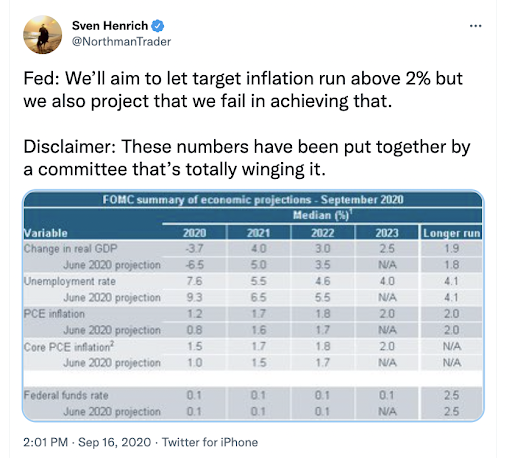 Source: Twitter
In 2019, the Fed also missed everything it projected: 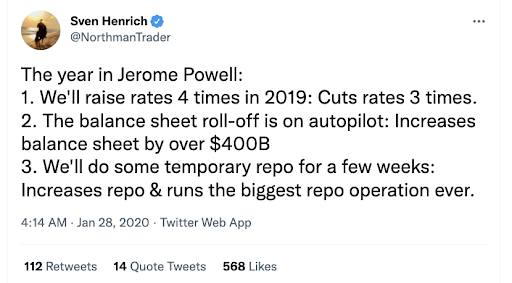 Source: Twitter
For now, we’ll continue to listen to every sound bite from Fed officials as they look to combat inflation via scare tactics. But one year from now, it’s doubtful that the high correlation between rates, equities, and digital assets will be anything besides another footnoted relationship that didn’t hold.
Twitter’s Edit Button… Meh
Elon Musk bought a 9% stake in Twitter (TWTR), resulting in a roughly 20% gain in the stock price. There has been much speculation about how active Musk will be on the board and what change he will support. Thus far, there have been a lot of Twitter polls asking the community what they want to see from Twitter.
Source: Twitter
Here we go again. The right solution is staring Twitter and Musk in the face—much like it is for Disney, Netflix, Starbucks, Delta, Meta, and many other companies with large retail customer bases—but it is an afterthought. Twitter has grown to a $37 billion market cap, with 100% of its usage and revenue driven by those who create and consume content, yet none of the $37 billion of value accrues to those who make Twitter succeed. With 400 million MAUs, there is no doubt that a Twitter token would immediately have a higher market cap than its equity. A Twitter token could have much of the same hybrid characteristics of today’s top centralized tokens:
There is a reason that digital assets have become the greatest capital formation, customer bootstrapping, and stakeholder alignment instrument. It’s only a matter of time before non-”crypto native” companies realize it.