What Happened This Week in the Digital Assets Markets?
Week-over-Week Price Changes (as of Sunday, 09/25/22) 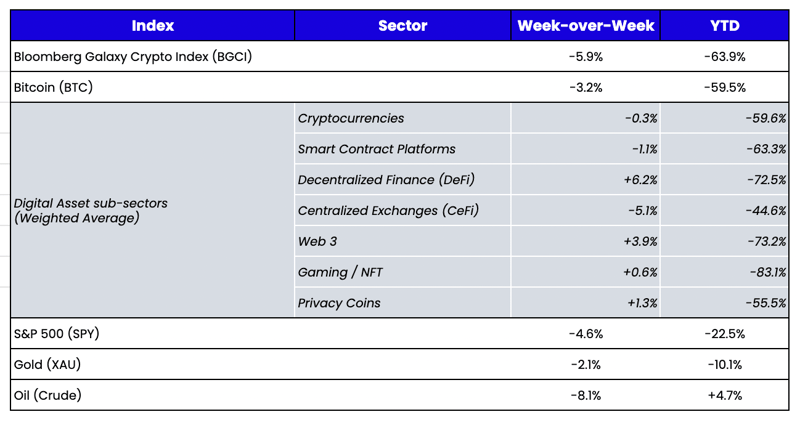 Source: TradingView, CNBC, Bloomberg, Messari
Powell Slams Markets
Fed Chairman Jerome Powell did not mince words during his Jackson Hole speech a few weeks ago, and he continued the hawkish rhetoric last week following the third consecutive 75 bps rate hike. We knew rates would keep increasing, and we learned from Powell's post-FOMC decision speech that we would get there faster than the market had expected and remain there longer than expected. The revised dot plot indicates board members expect to take rates to 4.625% in 2023, up from the 3.75 projection at the June meeting. This led to:
It will never cease to amaze me that trillions of dollars move on the Fed’s new estimates, even though the Fed has been dead-wrong about inflation and rate estimates for over a decade. First, they incorrectly anticipated inflation would rise above 2% post-financial crisis when instead, it was stuck below there for a decade. And then, of course, completely whiffing on their transitory stance once inflation was already out of control. Regardless, they continue to talk tough, and markets are starting to believe them again.
“Dot Cryptos”
While it has become a convenient narrative to assume that digital assets’ fates are tied to macro, the reality is this is a very short-lived correlation that only applies to a few bellwether cryptocurrencies like Bitcoin. The future success or failure of digital asset investments will be more closely tied to user and app growth than to dot plots. But with the ETH Merge in the rear-view mirror and the FOMC stranglehold transparently and clearly stated, what will be the next catalyst to drive digital asset prices? To answer that, we must acknowledge how bad the data is and compare it to data points suggesting trends may reverse soon.
To start, the rise of DeFi, stablecoins, and NFT transactions was the backbone of the 2020 and 2021 rallies. Now, 2 of the 3 are seeing significant declines in usage and transactions. 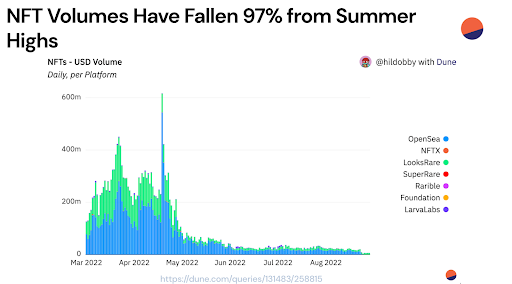 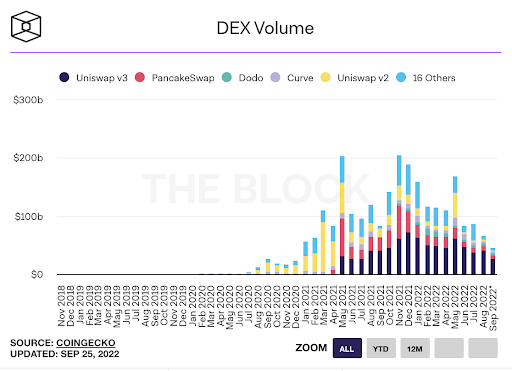 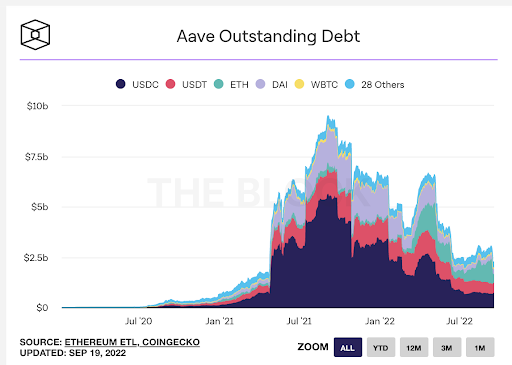 Source: The Block
The one bright spot is that U.S. dollar stablecoins continue to see significant demand and all-time-high transaction growth. This is especially encouraging given the 3rd largest stablecoin (UST) evaporated, and U.S. lawmakers are likely to impose new regulations on stablecoins in the not-too-distant future. 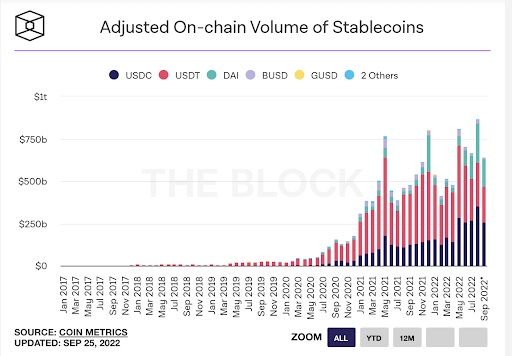 Source: The Block
Overall, this isn’t a great backdrop. Most digital asset projects today are still highly levered to users, transactions, and volumes, and these 3 metrics are down. On the flip side, many data points suggest the end of this decline may be right around the corner.
To start, let’s state the obvious: investment dollars lead to better products, and better products lead to more customers—and there has been a flurry of investment into blockchain-based companies and projects from VCs and public companies. 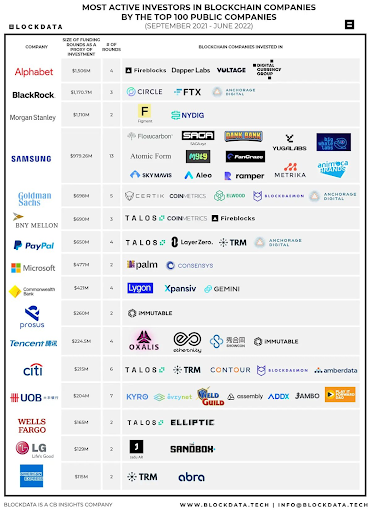 In the same vein, most digital asset protocols and companies today are “dot cryptos,” meaning they only exist because of the advent of blockchain technology and only focus on utilizing blockchain: Chainlink, Binance, Uniswap, Lido, Chiliz, for example. While the organic growth of “dot cryptos” has been impressive (Binance, for instance, has an estimated 28 million daily active users), existing companies experimenting with blockchain usage will likely onboard way more users to blockchain apps and wallets than any organic blockchain project. In the last few months alone, we’ve seen the following examples of adoption:
That list isn’t exhaustive and doesn’t include companies like SocGen that have been issuing bonds on Ethereum and Apollo, which is collaborating with Providence blockchain (Figure) to do securitizations.
So while today’s data looks bleak, there is hope—if for no other reason than existing communities of users and customers are much easier to port over to blockchain apps than it is to create organic demand. 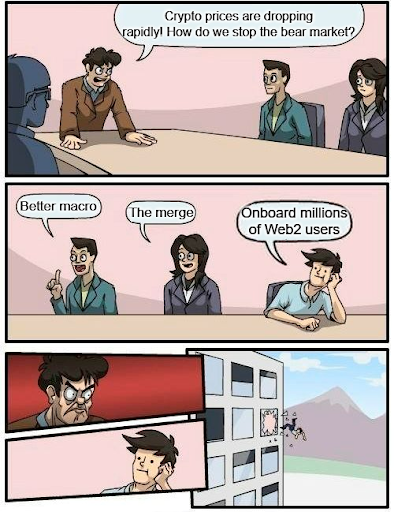