“That’s Our 2 Satoshis” — DeFi Still Winning, But Bonds May Be More Attractive

What Happened This Week in the Digital Assets Markets?
Week-over-Week Price Changes (as of Sunday, 6/26/22) 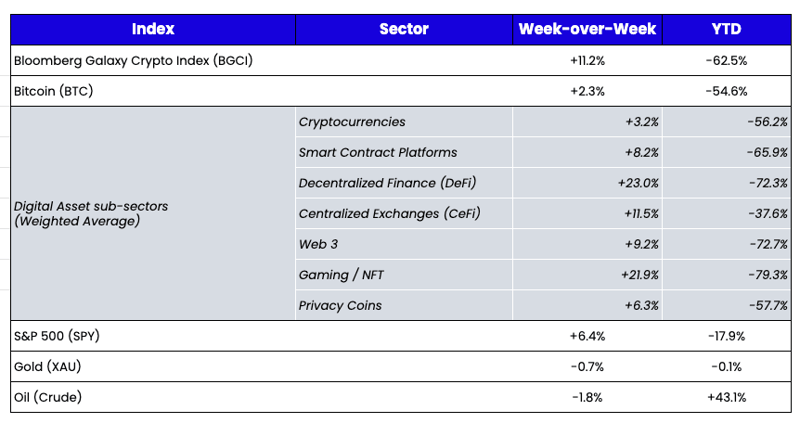 Source: TradingView, CNBC, Bloomberg, Messari
Don’t Call It a Comeback
What appeared to be the throes of despair were met with brave buyers on the dip. After back-to-back weekly losses of -5% for U.S. equities, the S&P 500 rose nearly +6.5% last week, while the Nasdaq gained +7.5%. And digital assets rallied as much as +20-30%, led by the most beaten-down sectors, DeFi and NFTs/Gaming.
The cynic in me would dismiss these gains as a “bear market rally” or merely short-covering, but the bull case is that DeFi protocols and applications did their job while their centralized exchange/lending platforms (CeFi) did not. That’s what led to the bounce in DeFi, which trickled down to the rest of the market.
The carnage in the past six weeks has been very real, but every company that is currently facing solvency issues is a centralized company with a CEO, a board of directors, and human decision-makers. Not a single line of code from DeFi or a smart contract is capable of making the costly decisions that these companies made. 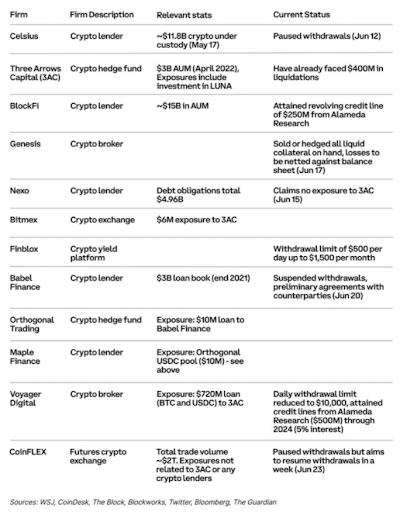 Source: Twitter
The bounce was further aided by positive signals across the global macro market. The Fed is still erring on the side of hawkish, but is now quietly opening the door to pivot when/if we get a recession or they need to step in to prevent a full-blown market collapse. This has helped the bond market rally off the lows and has sent the U.S. Dollar lower after bumping up against resistance.

Source: Twitter
In addition to a better macro backdrop, digital asset companies and projects are beginning to announce positive updates again after a 2- to 3-month hiatus, and the market is rewarding them.
Without Reg FD rules requiring systematic updates, companies and projects are free to spit out news and updates whenever they want, and they often choose to hold these announcements back when the market isn’t in a forgiving mood. But the increased pace of positive news and a positive response from investors will likely lead to more of the same.
DeFi, Meet the Bond Market
While DeFi is having its breakout moment, investors in DeFi are struggling to generate yield as the widespread deleveraging is putting pressure on once plentiful yields. Perhaps these yield-hungry investors need to look at the bond market as an alternative. MSTR, COIN, and GLXY bonds all yield more than anything available in DeFi. For example:
When bonds with negative net debt and high asset coverage offer double-digit yields, smart investors will begin to divert some of their attention this way.
Developing Secondary Market Buyers
One of the biggest challenges to digital asset adoption has been a lack of secondary market buyers. Venture capital funds continue to demand most of the investment dollars, leading to many well-funded startups but few “growth equity” funds helping to take those projects to the next level. Retail investors are carrying the load until institutional investors show up. So how do we develop buyers of more mature projects? First, we must continue to educate—via blogs like this and other objective research that helps cut through the noise and focus on the depth, complexity, and valuation techniques of this evolving market. Separately, we could use more smart partnerships like the one between Bitwise and Multicoin announced a few weeks ago. In short, Multicoin is turning its VC portfolio into an index that FAs and other investors can purchase to help fuel growth. Skeptics would say this looks like a gimmick to help Multicoin “sell its bags,” but I believe this is a step in the right direction to develop secondary market interest. It’s still challenging to invest on your own, and for those who don’t have access to an actively managed fund, this is a good alternative.
Additionally, both AIMA and PWC recently released reports about the growth of the digital asset hedge fund industry. AIMA noted that 1 in 3 “traditional” hedge funds surveyed are currently investing in digital assets, compared to 1 in 5 when they surveyed last year. And of those hedge funds that are invested in digital assets, 57% only have a toe-hold position with less than 1% of its total hedge fund AUM invested. Similarly, two thirds of those hedge funds (67%) that are currently investing in digital assets intend to deploy more capital into the asset class by the end of 2022. Additionally, 29% of hedge fund managers who are not yet investing in digital assets confirmed that they are in late-stage planning to invest or looking to invest. Meanwhile, PWC noted that adoption is still very low amongst institutional investors.
Between index products like Multicoin/Bitwise and new capital deployed to hedge funds, that secondary bid should develop quickly. 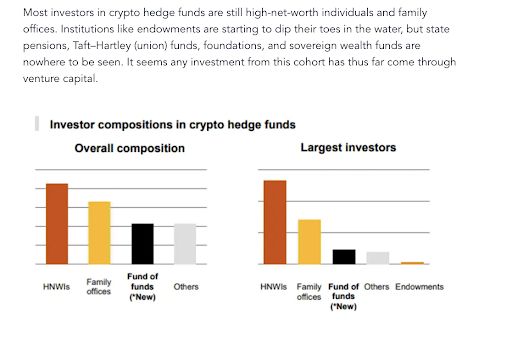