Rational Responses to News Indicate Maturation of an Asset Class

Written by Jeff Dorman, CFA
Oct 19, 2020
What happened this week in the Digital Assets markets?
Week-over-Week Price Changes (as of Sunday, 10/18/20)
Source: TradingView, CNBC, Bloomberg
The Market’s Reaction to News Was Perfectly Rationale
It was a listless week across all risk assets, and digital assets were no exception. Bitcoin was range bound, large cap assets followed suit, and small caps were mixed even as DeFi continued its slow bleed lower despite further growth in the usage and volume of the underlying protocols and marketplaces.
The only notable news was once again a black eye for unregulated Asian exchanges. OKEx, one of the industry’s largest digital asset exchanges, suspended all token withdrawals and deposits as they say they can't get a hold of one of their private key signatories to authorize. Per the team, this is due to the holder's cooperation with law enforcement for a personal matter, and they haven't been able to contact him while he is complying. On the heels of the BitMEX indictments from a few weeks ago, this puts the market’s attention back on the safety and security of large exchanges.
Whether you believe the story or not, there was one bright spot -- the digital assets market acted entirely rationally to the seemingly negative and sudden news.
First, Bitcoin dipped briefly, but then recovered fairly quickly. The short-lived drawdown was similar to the price action following the Bitmex news a few weeks ago. While this may seem like no big deal, it is important because it shows a maturation of the industry. Bitcoin the asset is no longer being confused with Bitcoin the industry. Further, it once again reiterates how diversified the business of trading Bitcoin really is, and how little one or two players matter in the larger scheme of things.
Bitcoin’s reaction and subsequent recovery following the Bitmex news (left shaded) and OkEx news (right shaded)

Source: TradingView
Second, the tokens that should have been impacted by the news were in fact directly affected.  The native OkEx token (OKB) fell swiftly and continued falling throughout the remainder of the week (-27%), dragging the tokens of other Asian exchanges (BNB, HT, FTX) down lower in sympathy.


Third, and most important, after initially dumping on the OkEx news, the token of the largest decentralized exchange, Uniswap (UN), pulled a crazy Ivan and began to increase sharply. It’s almost as if the market realized suddenly, “Wait a minute… the risk at these centralized exchanges where a few key people control my destiny may be exactly the reason we’re all celebrating the success of decentralized and non-custodial exchanges”.  A decentralized exchange (DEX) offers many of the same trading functionalities as its centralized exchange (CEX) counterparts, but allows you to keep full control of your assets at all times, as the DEX’s are non-custodial.  As such, any instance where a CEX struggles due particularly to the custodial and centralized nature of their services should be a direct advertisement for the DEX alternative, all else equal. The knee-jerk reaction lower for UNI followed by a sharp reversal higher after the market digested and reevaluated the news was a classic example of what happens in traditional markets all the time.  Equity and corporate bond markets tend to have knee-jerk reactions following significant news and earnings, usually led by algos and bots, and if that reaction is wrong, common sense prevails and the cavalry arrives (large, institutional buyers).  This is the first example where we saw this same dynamic play out in digital assets.  The market makers and algos assumed the OkEx news would be sweepingly negative for all assets, but real buyers recognized why this was positive for DEX’s at the expense of CEX’s and swept in.


This is a really good sign for the digital assets industry, as it demonstrates a continued maturation process and a further shift towards fundamental based investing. 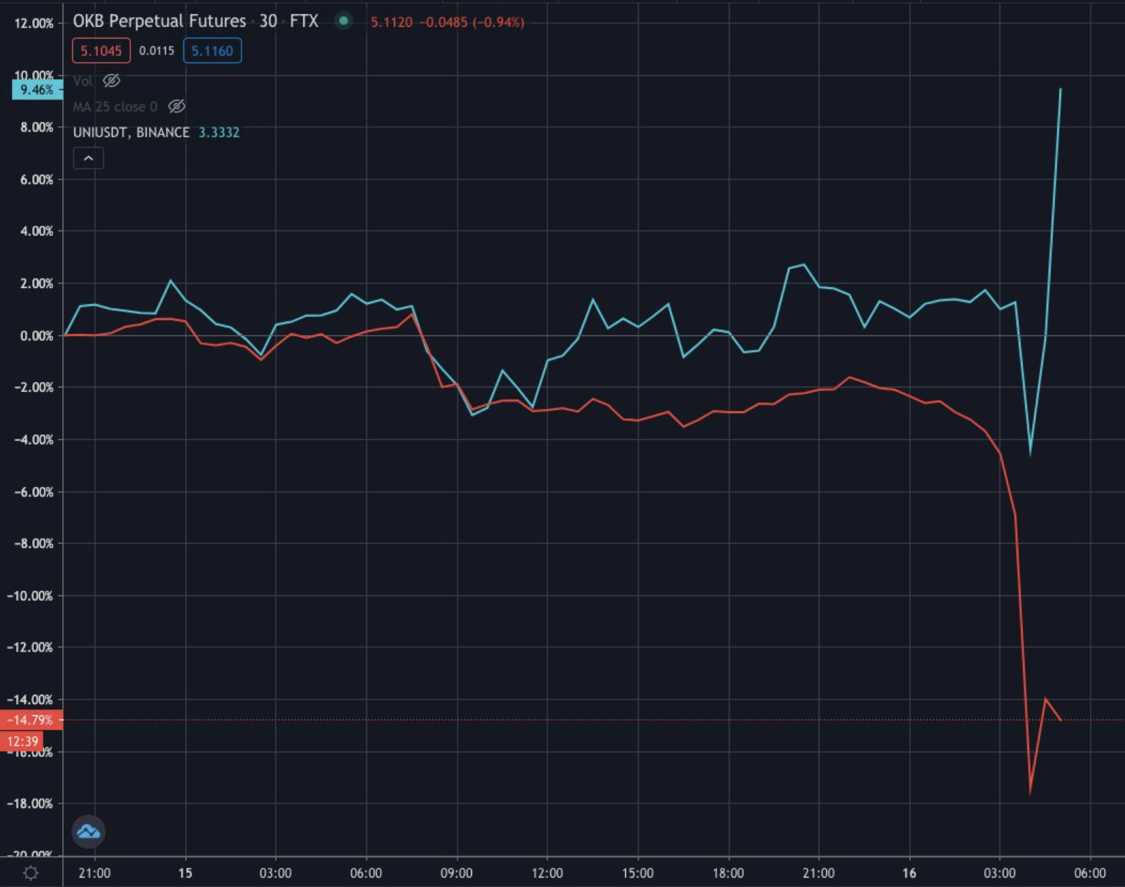 Source: Twitter / @mrjasonchoi
Volatility is Officially Dead, but Bloomberg is Thriving
One of our favorite periodicals is the Bloomberg Crypto Outlook.  Not because it says anything particularly insightful per se (though this past one was worth the read), but rather because it is an explicit advertisement for Bloomberg’s new digital assets functionality.  The entire point of this quarterly writeup is to show off the various tools Bloomberg has built to allow institutional investors to learn and monitor this space.  These tools are still very underwhelming when it comes to the amazing amount of data that is available elsewhere, and Bloomberg’s focus is entirely on Bitcoin, Ethereum and a few other legacy large cap tokens that no serious investor in this space would ever consider, but it is nonetheless a positive sign that Bloomberg has entered the arena.  A few years ago I had a conversation with a Bloomberg rep where he told me “we can’t help you, the decision is coming from the top not to get involved in digital assets”.  Funny how the tune changes when Fidelity, Square, Paul Tudor Jones, the CME and plenty of other Bloomberg users begin demanding a full service approach.
One of the more interesting takeaways from this past report was the topic of Bitcoin volatility.  While Bitcoin is often portrayed as having incredibly high levels of volatility, the data shows otherwise. Bitcoin is now trading at all time low volatility levels compared to the Nasdaq.  Perhaps it’s once again time to update the “Naysayer handbook”. 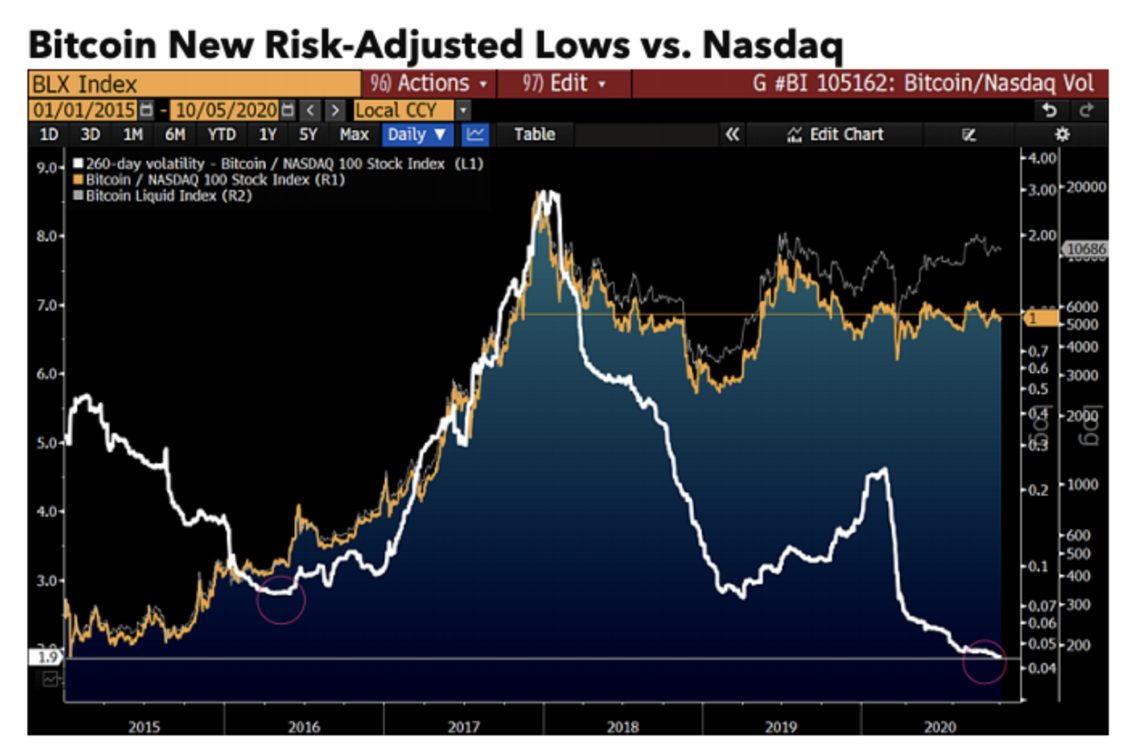