Written by Jeff Dorman, CFA
Dec 5, 2022
What Happened This Week in the Digital Assets Markets?
Week-over-Week Price Changes (as of Sunday, 12/04/22) 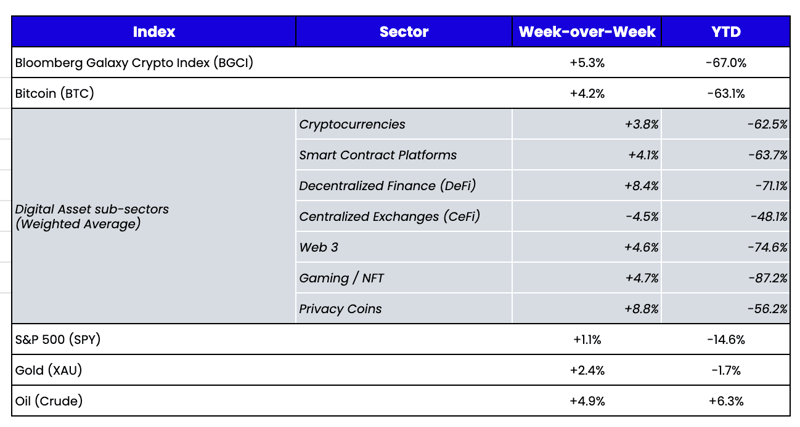 Source: TradingView, CNBC, Bloomberg, Messari
Can We Get Back to Talking About the Market?
Every week for more than 4 years, we have written about obscure corners of the digital assets market. We’ve focused on valuation techniques, event-driven opportunities, distressed assets, emerging sectors, hacks, software upgrades, experimental protocols, failing regulation, questionable business practices, and everything else that has evolved from the early days of just Bitcoin. Sometimes our analyses were too obscure for most; other times, we hit on a topic that resonated with many. But never before did we feel the need to write about the same topic for 2 weeks, let alone 4 weeks in a row—until now. There is no way to discuss the current digital asset markets without focusing on the knock-on effects of FTX and Alameda’s fraud.
To be fair, there are currently a few areas of differentiation, and this differentiation illustrates that the market is not totally broken (in fact, it’s been flat to higher for 3 weeks now). Investors will still invest when there is an opportunity that is isolated from the industry carnage. For example, ApeCoin (APE) is going live with staking this week, and there are numerous outcomes for the staking rewards based on the amount of APE, Bored Apes, Mutant Apes, or other Yuga Labs-created assets that you own (APE is +50% since the post-FTX lows). Meanwhile, Uniswap (UNI) community members have reintroduced a proposal for initiating a fee switch, leading to a 20% rise in the token, as Uniswap remains the dominant decentralized exchange. But apart from a few outliers seeing a reallocation of assets from within the industry’s remaining investors, for the bulk of market participants, contagion is trumping market events. We’re back to where we were this summer when the focus was on “who you have exposure to” instead of “what you have exposure to.” But it seems more personal this time around, perhaps solely because SBF and FTX duped so many people.
Let’s back up for a second. Fraud and cheating are everywhere. In just the past few months alone, we saw scandals rock:
Cornhole: The American Cornhole League is implementing stricter testing protocols for bean bags after officials caught both teams using non-compliant bags in a recent World Championship match.
Chess: The Hans Niemann/Magnus Carlsen saga is ongoing, with Niemann suing Carlsen for defamation and a Chess.com report suggesting Niemann has "likely cheated" 100+ times.
Fishing: Two fishermen face felony charges for stuffing their fish with weights at a recent tournament. When the fish were cut open, judges found lead weights and even raw fish fillets intended to tip the scales.
Poker: A woman was accused of cheating after using an unconventional strategy to win a $260,000 hand, leading to armchair detectives trying to uncover all facets of the scandal.
Irish dancing: Text messages show that at least 18 dance teachers in Ireland appear to have requested or offered to fix numerous competitions over the past two decades.
Most people were unaffected by these acts, and therefore there is little ill will towards the players or the industries. But in digital assets, just about everyone has been affected, which triggers strong emotions. FTX, Alameda, Terra Luna, BlockFi, Celsius, Voyager, and Three Arrows were 7 of the largest and most influential entities in this industry, and they are now—for all intents and purposes—gone and irrelevant. Many are conveniently using FTX as a scapegoat for their problems, but recent discoveries from bankruptcy court documents and other reports show that most were doomed regardless of FTX. And this hits home harder than the many other scandals and failures happening every week around us because these companies touched (and tricked) so many people. Their failures have humbled even the most prominent and successful investors, who now blame the industry for their own mistakes.
Our inboxes are flooded with vitriol from people rightfully angry about the fallout caused by FTX and Alameda, but their questions are centered around who will be next to fall and how the industry will ever recover than a more salient question— “What’s the best current investment opportunity?” While the latter is admittedly tough to answer, the lack of interest in at least thinking it through is stunning. Most would instead continue to short Tether, hoping to finally get a short right, rather than spend the time looking for the next cycle’s winners.
If this isn’t a sign of capitulation, I don’t know what is. 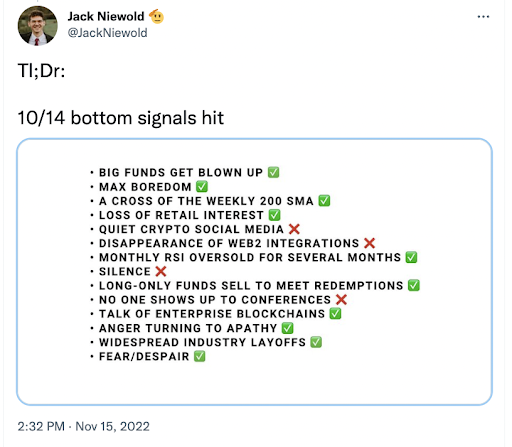 Source: Twitter
I believe we’re at, or close to, a market bottom. For one, it’s incredibly hard to short right now, given lending is virtually dead and the easiest place to short futures (FTX) just short-circuited. So, the only way to really move the market lower is if a long holder of digital assets who has yet to sell everything suddenly decides now is the time to throw in the towel. Second, the macro picture is definitely changing for the best as the U.S. dollar subsides, rates retreat, growth indicators fall, and the Fed indicates rate hikes will slow. Third, there has been carnage in all asset classes this year outside of the energy sector, and there are far fewer people invested (and therefore hurt) by digital assets’ declines than those who are getting hurt by their equity, debt, and real estate allocations. This suggests we could see some new inflows in digital assets and out of other asset classes at some point. But here’s the problem with calling a bottom: there has to be a reason to go higher eventually. And that immediate bull case is much harder to see right now. So as we begin to find a footing, let’s discuss a few ways that prices can start to rise.
Finding a Path Forward
In July 2022, the end of the first wave of Luna/Celsius/Three Arrows contagion and downward price action coincided with a string of positive industry-wide news. It started with a definitive date for the Ethereum Merge, followed by numerous token projects announcing everything from management changes to tokenomics upgrades. To get a similar result today, we’d need certain DeFi and Web 3 protocols to ignore market conditions and move forward with planned announcements and updates. For example, the Starbucks/Polygon (MATIC) beta launches this week.
Next, we need regulation in the U.S. to make progress. Many companies and investors that haven’t entered the space because of the murky regulatory environment luckily dodged the criminal, negligent, and incompetent bullets of 2022. When we finally progress, I believe the floodgates will open with new token issuers (corporations, universities, municipalities), which will bring in investment bankers, broker-dealers, and investors. This will lead to the next bull market. As we’ve discussed previously, stablecoin (e.g., digital money market) regulations are the easiest, lowest-hanging fruit, while mandatory reporting and disclosure requirements from exchanges would be the next simplest. And eventually, the SEC and other governing bodies will have to concede some ground and recognize that this is a technology worthy of concession. For example, a former SEC official and current Bain Capital employee explained why it doesn’t make sense to consider most tokens through a security lens. It’s a refreshing, objective take on incentives, rewards, ownership, and membership that illustrates the uniqueness of varying token structures. Further, it is a reminder that only Congress can fix the SEC’s mess.
There is a path to success here. This industry has proven product-market fit (stablecoins, DeFi, NFTs). It now has an opportunity to build a better system with DeFi and self-custodial wallets that don't rely on trusting 3rd parties.
Tokenizing SBF’s Time
Currently, anything regarding SBF or FTX is a slippery slope. He (and his partners and enablers) hurt a lot of people, and the pitchforks are everywhere. With that in mind, perhaps it was in poor taste to make a logical (and unempathetic) statement about how blockchain could actually be utilized by SBF right now. This did not go over well and, as the kids say, my tweet got ratioed pretty hard. 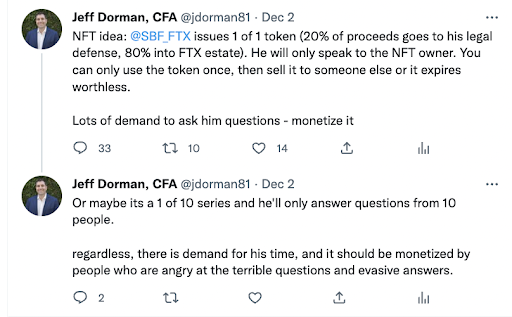 This tweet received so many emotionally charged replies that I can't properly evaluate whether people believe the idea was bad or the main character's inclusion. I certainly did not mean to suggest that SBF should be allowed to profit from this; rather, there needs to be an incentive for both SBF and truth seekers. And logically, I believe this is where we’re headed. EVERYTHING that can be owned and valued will eventually be tokenized. SBF has been talking to select reporters who are chomping at the bit, hoping he will incriminate himself. While this provides great clickbait for the media, many others are angry that journalists aren’t asking the right questions. Essentially, there is a massive demand for SBF’s time and answers. The supply of that time is finite, which is very valuable to the media and others who want answers. Rather than pick out his suitors and charge for his time directly, he could create a token representing a finite amount of time that he is willing to speak and let the market set a price for what that is worth. Tokenization is the best way to use incentives to turn an asset (in this case, time/answers) into definable and tradable value.